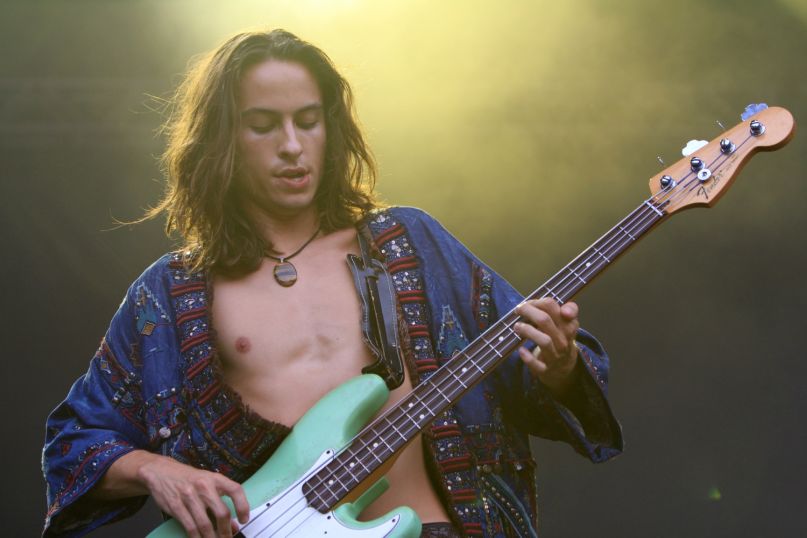 It’s been a whirlwind year and a half for Michigan rock act Greta Van Fleet, having burst onto the scene in spring 2017 with the single “Highway Tune” and having just released their debut album, Anthem of the Peaceful Army, last week.

The young band — consisting of three brothers, Josh (vocals), Jake (guitar) and Sam Kiszka (bass), and one childhood friend, Danny Wagner (drums) — has rocketed to fame, being hailed as rock ‘n’ roll saviors by some, and being called Led Zeppelin knockoffs by others. It’s been a lot to take in for Greta Van Fleet, but the youthful rockers are diving in headfirst with positive energy.

With the band currently on the road and getting ready for a massive world trek in 2019, Sam Kiszka checked in with us to talk about the band’s new album, dealing with sudden fame, the polarizing reaction from music fans, and carrying the torch for rock ‘n’ roll. Read our interview with the bassist below:

There is a lot that is associated with the growth of a band, and I don’t wish it upon anybody. I think taking a long time to grow is one of the best opportunities given to anybody, and we really had to learn fast, and we’re still learning fast, because every day we’re doing something new. So, I suppose it’s very, very difficult, but it’s also very fun to be able to do everything on a relatively large scale. And to experience this so fast, but there’s definitely little time to do anything, and there’s also not really a lot of room for error. It’s our creative initiative to be the best that we can, so, yeah, it’s been an absolutely crazy experience.

On the positive energy of Anthem of the Peaceful Army, when a lot of modern hard rock is rooted in anger

Yeah, a lot of bands are oriented to anger and hate, but we’ve never really been angry people. We’ve never really been attracted to that kind of music. It’s OK to be mad in certain ways, but when you’re just mad all the time, that gets nothing done, that accomplishes nothing. I think being positive about certain topics and issues is hyper important, especially when you’re talking about what we’re talking about. I think the best way to go about that is collectively. I don’t think there’s really any anger on the album. I don’t think it really gets to that. It’s a different way to approach [heavy music]. We think this is the best way to do it, for us, at least.

On the grand album-opening track, “Age of Man”

It kind of started off just as a guitar bit. “Age of Man” took its time to live and come to life. And we sat in the studio a few nights, trying to work through it, bringing different elements to it, but eventually we kind of isolated ourselves on top of a mountain in the Chattanooga mountain range in Tennessee. And we just sat there all night, and we worked the entire thing out, and it came to life, and we made a demo of it and everything, and it turned out to be very, very large and very special.

I think that putting it up top and leading the album with it was a curveball for a lot of people. I think when they hear the name Greta Van Fleet, they kind of think they know what they’re about to get, and it makes a statement right off the top that this is not some silly rock record. It makes a listener sit down, and kind of says, “You’re gonna listen to me, and you’re gonna listen to me loud.” When I hear that track, I want to hear more. It’s a very lyrically heavy. It’s about a lot of things, of them, the generational change, and how we interact with different generations. Once you get into the lyrics, it’s a game changer.

On the album’s first single, “When the Curtain Falls”

I think that “When the Curtain Falls” was a really, really great segue from [the 2017 EP] From the Fires into Anthem of the Peaceful Army. It was a familiar sound but it was bringing it in a different direction. And also, lyrically, it’s very different than anything Josh had ever done. I think it definitely has more than one interpretation.

On the track “Mountain of the Sun”

That one is just a very fun song. It has a different vibe, but it has continuity with the album. There’s a little bit of Rolling Stones in there. And there’s a little bit of classic African music in there, like Miriam Makeba, which Josh listens a lot to, and that’s kind of in there. And it kind of moves. It kind of reminded me of playing Motown stuff back in the day. And it’s very much a jam, and I think you can hear that. For the whole album, basically, we wanted to bring the live stage into the studio, and I think you can really hear it in “Mountain of the Sun”.

On the acoustic album closer, “Anthem”

I think “Anthem” is very, very special. It kind of goes back to “Age of Man”. Of course, “Age of Man” opens the record, and then “Anthem” does the job of closing it. And once again, it is not at all what people would expect from Greta Van Fleet. I really like that factor about it. This one had a certain beauty about it that we really wanted to hold it back a bit. It was kind of based on an old demo that we did, and we came across it, and I said that we had to make a song out of it. We all sat in the Royal Oak recording studio. It was an acoustic guitar, a lap steel, and a bass — and Josh was kind of writing the vocal part. And there was definitely something that took over the air that was very special. We decided we had to put that on the record, and it kind of took over a certain portion of the project. I think that it really sums up what the whole record is about, what the whole record is saying. It kind of paraphrases it all.

The answer is we don’t read any of that. I think that sort of thing is very caging. I don’t think it affects us positively when we get into all of that. I think that we should be relatively unaffected by what other people say, and so far it has gone so. And in the studio, we sat there, we made the record. I don’t think we ever considered, ‘Well, will the people like this?” I think at this point we’re very clean of that, and hopefully we stay that way. But we get so much support from the people, and it’s great. It really gives us the opportunity to get up and go, and really have the inspiration to do this.

On the music that influenced the band members

Well, I think the songwriting-based stuff is what really what got us excited. Even though I’m not sure that we knew it that early on, but that’s really what we loved. We listened all the time. Me and Jake would sit in the basement and listen to Bob Dylan for literally five hours, some of the most inspiring stuff that you can ever listen to. But I think that the opportunity to listen to music like that came from our parents’ record collection. And that’s really the fundamentals of what we do is old blues like Lead Belly or Son House and Robert Johnson and Lightnin’ Hopkins.

So, it’s that kind of stuff that really inspired us. It was that magical sound that really brought us in, and tempted us for more and more. We listened to everything from Jim Croce to Neil Young. We had our time with pretty much every single rock ‘n’ roll band, old and contemporary. It all kind of worked into the inspiration. We listened to Santana, The Doors, The Kinks, The Animals, even Aretha Franklin, a lot of the Motown stuff. That’s where it all comes from. Like I was talking about earlier, Miriam Makeba, ‘70s African pop.

On their recently announced 2019 world tour

I think the whole stage show is going to change up a bit. It’s always gonna be us four playing, but we’re gonna bring in more elements, just like we did for the album. We’re gonna stretch the bounds of what Greta Van Fleet can do. And I think we’ve always been a live band. That’s always been our niche, performing live. That’s what we do, that’s what we grew up doing. So, I’m very excited for the next level of production. The support that we have gotten up until this point is incredible. The fact that people are coming out and enjoying the music as much as we are.

This is what we do, it’s not like we’re going to be doing anything different, but with that being said, it’s also very cool to be spearheads of this movement. Right now, it’s a great time for music. We look around, and a lot of our contemporaries are really, really stepping it up. I think that we’re moving into a musical renaissance, so it’s so cool to be a part of it.

I suppose there is a bit of an underlying pressure, but we have our bandmates, and we have our confidence with each other, and I think that support system makes it quite easy to go along with it and be creative. With Josh, Jake and Daniel and me altogether, I don’t think there’s anything that really scares us when we have each other.

CLOVES really comes to mind. She just released a new record. And holy shit, it’s this whole reawakening. I think when I heard that record, I was blown away. To know that it’s something that is right now, I just became very, very excited. There’s a lot of things going on right now that really point a finger at a renaissance, like I said earlier. I think there’s a giant growth in creativity and I think that it’s gotten to that point where there’s something that needs to be said about a lot of things, and I think a lot of people are doing that — whether it be a self-identity crisis, or whether it be politics or whether it be environmental conservation, I think there’s a lot of things we need to talk about. And I think it’s the artist’s job to do so, and that’s important. I think it’s gotten to that point where the artists are no longer going to be contained in one spot. It’s kind of sprawling out now, and that makes me very, very excited.

Our thanks to Sam Kiszka for taking the time to speak with us. Greta Van Fleet’s Anthem of the Peaceful Army album can be ordered here, while their tour dates are listed here.