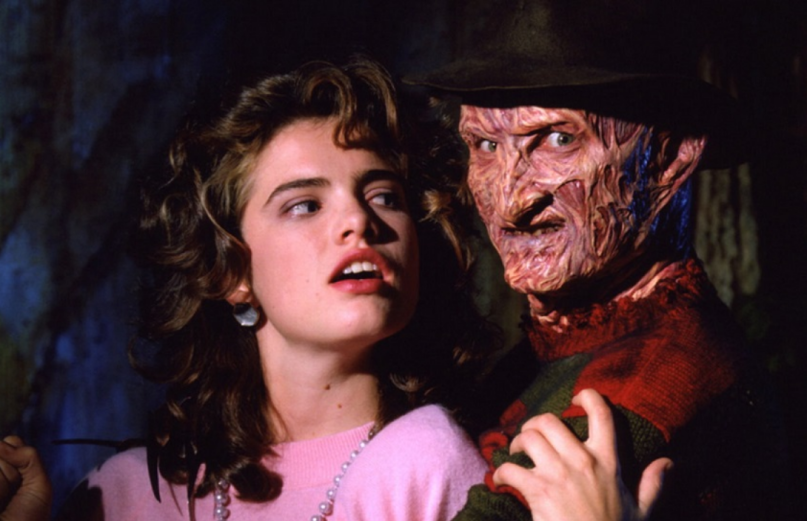 Heather Langenkamp and Robert Englund, A Nightmare on Elm Street

Are we going from Haddonfield to Elm Street? Possibly. Last week, Robert Englund dusted off his hat and sweater to play Freddy Krueger for a Halloween episode of The Goldbergs, to which he later hinted he may have “one left in me.”

Well, every villain needs a hero, and naturally, star Heather Langenkamp, who played the first heroine Nancy Thompson in Wes Craven’s 1984 original, has also expressed interest in another sweat-inducing nightmare.

“I’m sitting here like any other scream queen in Hollywood, hoping that they revive their franchise,” Langenkamp tells Entertainment Weekly. “I’m not alone! I know of lots of other horror heroines who have this little bit of spring in their step thinking about the chance of perhaps being in [new versions of] the movies that they helped make famous as young people. It’s kind of crazy, but it’s definitely something I would love to do.”

“I haven’t [heard anything about a new film],” she contends. “I certainly keep up with friends at New Line Cinema, and so I would expect if Warner Bros. or New Line Cinema — whoever — would put something like that together, I would imagine that I would know. So, the fact that I don’t know leads me to believe that it’s probably not in the works.”

Of course, it’s probably a little too premature for anyone at New Line or Warner Bros. to be making calls right now, but one has to imagine discussions — or perhaps watercooler chats — are happening behind the scenes. With David Gordon Green’s Halloween crushing the box office two weekends in a row, they’d be insane not to entertain restarting the franchise.

However, a reboot or a remake is not a wise choice. What’s always separated Elm Street from its horror peers is its commitment to having a linear narrative — ahem, 1994’s New Nightmare is its own thing — and that has since made it one of the more enduring franchises. Hell, even 2003’s Freddy Vs. Jason stayed true to the original story. And while the 2010 remake admittedly had some legs, particularly with the inclusion of those snap dreams, it felt pretty pointless in the end.

Our suggestion? Secure Englund, grab Langenkamp for a dreamworld role, and dial up Lisa Wilcox, who could absolutely make a dent as Alice again. Then, grab some new kids and maybe even see if Dream Warriors scribe Frank Darabont might want to pick up the mantel and take things forward — at least behind the typewriter.