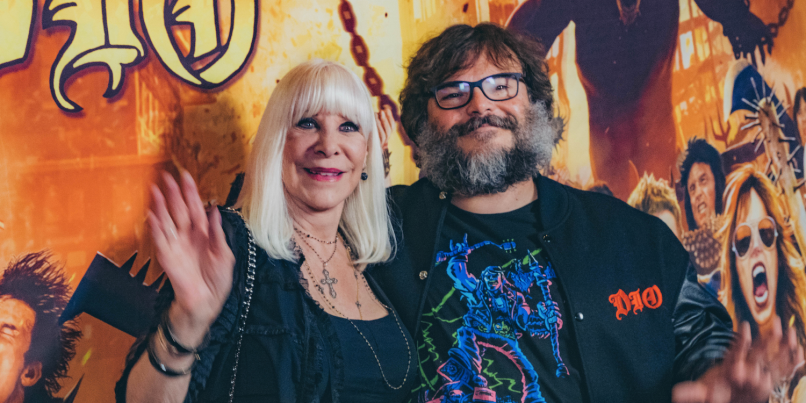 Wendy Dio and Jack Black at the Bowl for Ronnie Event, photo by Matt Akana

The legacy of the late Ronnie James Dio continues to bring metal fans together eight years after his death, as evidenced by the showing at the fourth annual Bowl for Ronnie celebrity bowling tournament in Los Angeles last Thursday (October 25th).

The charity event raises funds for the Ronnie James Dio Stand Up and Shout Cancer Fund, which, in turn, raises awareness and funding for cancer research.

Among the celebs and musicians who attended this year’s event at the Pinz Bowling Center were actor-musician Jack Black, Rage Against the Machine guitarist Tom Morello, Black Sabbath legend Geezer Butler and more. Radio personality Eddie Trunk served as host, and guests were also greeted by Ronnie’s widow, Wendy Dio.

Heavy Consequence caught up with Jack Black, who named “Neon Nights”, “Heaven and Hell” and “Stand Up and Shout” among his favorite songs by Dio, who, of course, fronted Rainbow, Black Sabbath and his own band, Dio. Black also mentioned “Last In Line”, which his band Tenacious D covered, earning the duo a Grammy a few years back.

“You can go all the way through his whole career, and he brought magic over the decades over and over to so many bands,” Black also told us, adding that Dio was the “greatest heavy metal singer of all time.”

Black concluded, “He brought operatic intensity to the genre … and put his indelible stamp on music history forever. And also, he was a righteous, beautiful guy. It was a great honor to have known him and be friends with him.”

See our photos from the 4th annual Bowl for Ronnie event below, and learn more about the Ronnie James Dio Stand Up and Shout Cancer Fund here.

Ahmet and Diva Zappa at Bowl for Ronnie Event, photo by Matt Akana

All photos by Matt Akana (mattakana.com)