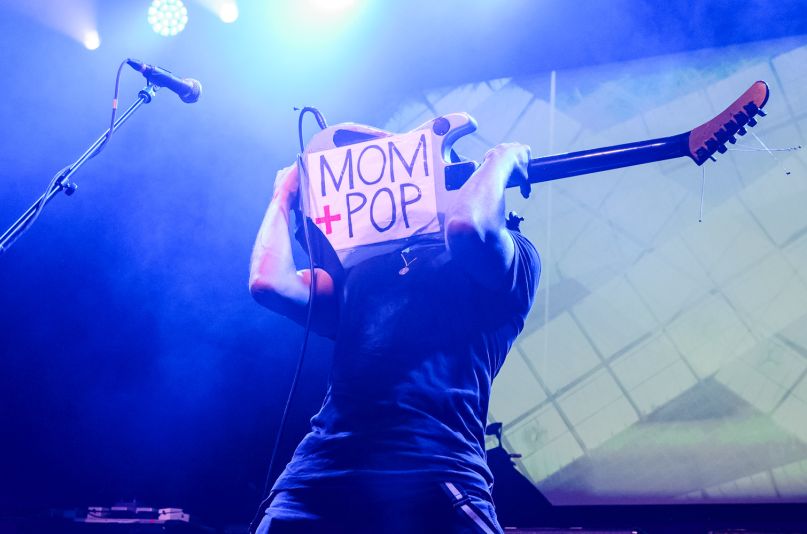 When it comes time to celebrate your birthday, you want to make sure all your closest friends are around you. If you’re a record label commemorating your 10th anniversary, you bring out the best your roster has to offer and throw yourself one hell of a party. Mom+Pop did just that on Monday night in Brooklyn, welcoming industry friends, fans, and rock lovers to Brooklyn Steel for a six-band shindig worthy of a decade of one of indie music’s finest labels.

The evening was heavy on current signees, including Artist of the Month alums Sunflower Bean and recent addition Alice Merton. Neon Indian came out of hiding for what frontman Alan Palomo said was only the group’s second performance of the year. Then came one of Mom+Pop’s biggest success stories, local noise rock slayers Sleigh Bells. The duo (or trio, as they add a guitarist live) tore through hits like “Comeback Kid” and “Crown on the Ground” before welcoming out Tom Morello to shred on “Bitter Rivals”.

After a slight break, the Nightwatchman came out to regale the crowd with stories about how Mom+Pop founder Michael Goldstone got Rage Against the Machine signed to Epic and helped them sneak lyrics by Viacom. He played a short two-song set that included new song “Battle Sirens” and a simply show-stopping cover of Bruce Springsteen’s “The Ghost of Tom Joad”.

Of course, the show didn’t stop there, continuing on with Mom+Pop’s current claim to fame, Courtney Barnett. The Aussie guitar goddess delivered the longest set of the night, which included throwing back to hits like “Avant Gardener”, focusing on her latest effort (Tell Me How You Really Feel) with “City Looks Pretty” and “Nameless, Faceless”, and hitting highlights with the balloon-drop-assisted closer “Pedestrian at Best”.

Though not every band got to dig into their catalog like Barnett did, the quality of all the music presented was a testament to how important Mom+Pop has become to the indie scene in its 10 years. It was the kind of celebration where everyone felt they walked away with the best party favors, a fitting way to mark a decade of great music making. Relive it all through the lens of News Editor Ben Kaye via the photo gallery below.