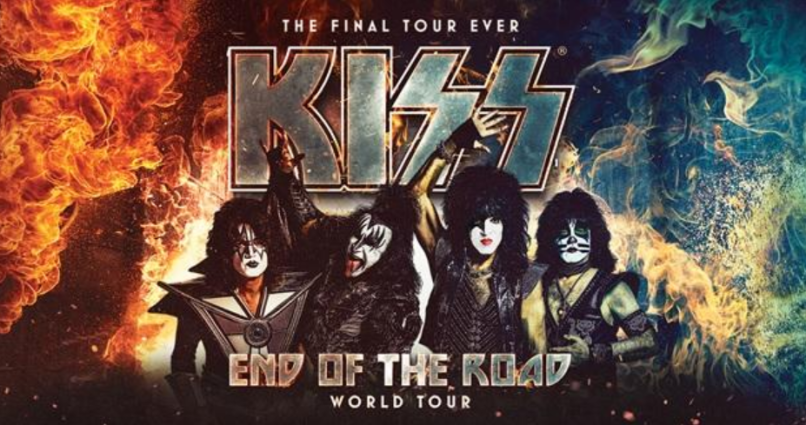 Whether you believe them or not, the members of KISS say their upcoming tour will indeed be their last. Today, the Rock and Roll Hall of Fame shock rockers mapped out the first leg of dates for their “End of the Road World Tour.”

Spanning 65 dates across two continents, the tour kicks off in North America beginning at the end of January. Following the American leg, which runs through mid-April, the band will make their way across the Atlanta for shows in the UK, Europe, and Russia. See the full itinerary below.

A series of fan pre-sales will take place ahead of the public on-sale scheduled for Friday, November 2nd. You can find more details here. Tickets can also be secured here.

In a statement, KISS says of the upcoming tour: “All that we have built and all that we have conquered over the past four decades could never have happened without the millions of people worldwide who’ve filled clubs, arenas and stadiums over those years. This will be the ultimate celebration for those who’ve seen us and a last chance for those who haven’t. KISS Army, we’re saying goodbye on our final tour with our biggest show yet and we’ll go out the same way we came in… Unapologetic and Unstoppable.”

In explaining the difference between this forthcoming jaunt and KISS’s previous farewell tour in 2000, guitarist Paul Stanley recently said: “The [2000] farewell tour was at the end of the time that we had brought back the two original members [guitarist Ace Frehley and drummer Peter Criss] and it was such drudgery and so difficult and so unhappy that it just seemed like ‘let’s put the horse down.’” He added, “After the tour was over, it didn’t take me very long to realize I didn’t want to say goodbye to the band; I wanted to say goodbye to two members.”

Once KISS finally do end touring, frontman Gene Simmons has a burgeoning soda business to fall back on.