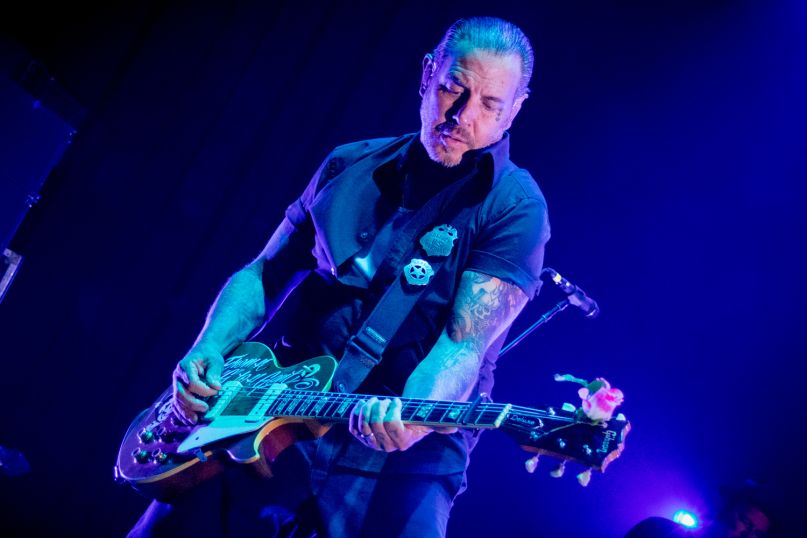 Setting the Stage: Upon approaching the Capitol Theatre in Port Chester, New York, on Wednesday night (October 3rd), a line of trucks were parked along the side of the venue, as often is the case when a band rolls into town. What you don’t usually see is the legendary frontman of an iconic punk band standing inside one of those trucks sporting boxing gloves and pounding away at a heavy bag. But that’s exactly what Mike Ness was doing a few hours before Social Distortion were scheduled to take the stage.

Opening acts Pony Bradshaw and Will Hoge had to compete with the New York Yankees playing a wildcard playoff game against the Oakland A’s that night, as the Capitol Theatre’s side bar Garcia’s was packed with fans glued to the television. But with the Yanks comfortably up 6-0 around the time Social D took the stage at 10 p.m., the main venue was filled up with fans ready to soak in the punk-rock goodness that Ness and company were about to bring.

Taking the Stage: Mike Ness has made no secret about his love for Tom Petty, so it wasn’t a surprise that he and the rest of Social Distortion walked out as “Mary Jane’s Last Dance” played through the PA system. He strapped on his guitar and the band launched into “Reach for the Sky” off 2004’s Sex, Love and Rock ‘n’ Roll. Five songs in, Social D delivered one of their biggest hits, “Bad Luck” from 1992’s Somewhere Between Heaven and Hell, and then took it all the way back to the beginning, with the one-two punch of the title track and “Another State of Mind” off their 1983 debut album, Mommy’s Little Monster.

It’s been nearly eight years since Social D released their last album, 2011’s Hard Times and Nursery Rhymes, but Ness assured the crowd that work would begin in earnest on a new album once the tour ends, which was met with a roar from the fans. Ness then asked the audience if there was anyone who was recently dumped in a relationship before launching into the new song “Over You”, which had a punked-up ’50s doo-wop vibe.

Before playing “Don’t Drag Me Down” to close out the main set, Ness explained that he wrote the song in the early ’90s when he witnessed acts of racism going on at his shows. He added that he never thought it would still be relevant in 2017, likely referring to incidents like the notorious one in Charlottesville that happened last year.

Social Distortion would return to the stage for a four-song encore, including another new cut, the hard-hitting “Born to Kill”. Ness and company closed out the night with a double dose of Johnny Cash covers — first “Folsom Prison Blues” and then the band’s own classic rendition of “Ring of Fire”.

It was during “Ring of Fire” that Ness brought up some young kids who were in the audience, interviewing them onstage. When he asked one 11-year-old boy named Vegas what he wanted to be when he grew up, the youngster said, “I wanna be a bass player in a rock ‘n’ roll band,” bringing a smile to Ness’ face and a loud cheer from the audience. After saying goodbye to the kids, the band finished up “Ring of Fire”, bringing a close to the night.

Notably absent from the set were signature songs like “Ball and Chain” and “Story of My Life” — with only “She’s a Knockout” representing the band’s breakthrough 1990 self-titled disc — but the crowd didn’t seem to mind. Scanning the audience, this was literally a show for all ages, as gray-haired elders were seen singing along to all the words alongside a new generation of fans who are just discovering the music of a legendary punk band who’s been going strong for nearly 40 years.

Setlist:
Reach for the Sky
Highway 101
Don’t Take Me For Granted
She’s a Knockout
Bad Luck
Mommy’s Little Monster
Another State of Mind
Machine Gun Blues
Over You
Far Behind
California (Hustle and Flow)
Don’t Drag Me Down