Drake had accused Kanye of being Pusha-T's source 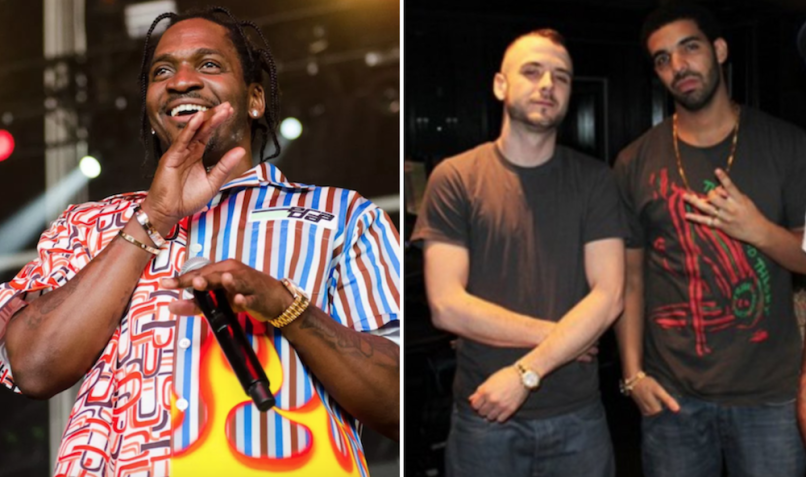 Kanye has been adamant that he was not Pusha-T’s source for “The Story of Adidon”, on which Pusha revealed the existence of Drake’s secret child. Drake believes otherwise and has spent the last few months taking some not-so-veiled shots at Kanye.

Now, however, Pusha himself has divulged the true source of his information — and it wasn’t Kanye. Rather, the Clipse rapper said he learned about Drake’s son from Drake own friend and producer, Noah “40” Shebib — or at least a lover of Shebib’s. As Pusha explained during an appearance on Joe Budden’s podcast:

“The information came from 40. It didn’t come from Kanye, at all. 40 is sleeping with a woman, who begins to… he talks to her daily. Five, six hours a day… And ultimately speaks about how he’s disgruntled about certain things, notoriety and things involving Drake and his career, and so on and so forth. With that also came the fact that Drake has a child. With that also came the trip that everybody took to go see the child, and bring him gifts, and all this information. She divulged this information. That’s where it came from.”

So it seems like 40 unintentionally leaked the info that led to one of the most devastating diss tracks in recent hip-hop history. Pusha-T went on to say that the only reason he was making this public now was because of how Drake responded to the lyrics about 40’s MS in “The Story of Adidon”. “They did the backlight and they put the spotlight on his face, ‘When you said my friend…’,” Pusha said. “But your friend is the reason why. That’s how it came about. That narrative’s gotta die. Listen, it needs to die. It’s done. That narrative is done.”

As Pusha-T continued, he cleared up any idea that there was any involvement or bad blood between him and Jay Prince, and the idea that he may not have won the contest of words. “All these false narratives are fueling and covering up, bro, we just had a battle, bro. And you came up on the short end of the stick of it. That was it.”

Listen to the segment of the podcast interview where all this went down below (via Hot New Hip-Hop).