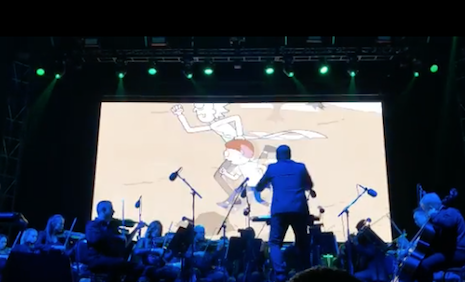 "The Rick and Morty Musical Ricksperience" at Adult Swim Festival 2018

Over the weekend, Adult Swim presented its inaugural festival in downtown Los Angeles. Attendees were treated to performances from Run the Jewels, Neko Case, and Hannibal Buress. They also witnessed a once-in-a-lifetime event in “The Rick and Morty Musical Ricksperience,” a set in which the recently released Rick and Morty soundtrack was brought to life thanks to a 37-piece orchestra and special guests.

The Hollywood Chamber Orchestra was on hand to live score the animated series’ “The Rickshank Rickdemption” episode from season three. There were also unique performances of Rick and Morty tunes “Terryfold”, featuring Bob’s Burgers’John Roberts, and “Do You Feel It” by synthpop outfit Chaos Chaos. Rappers Open Mike Eagle and Father made cameos to lead an arrangement of classic song “Get Schwifty”. “Moonmen”, originally by Ryan Elder, the mastermind composer behind the entire score, and Flight of the Conchords’ Jemaine Clement, also made its way onto the setlist.

Check out a slew of fan-caught footage below.

If that’s not enough, Adult Swim’s Jason DeMarco and one of the festival’s performers, Zola Jesus, appeared on the latest episode of This Must Be the Gig to talk about the event. Listen in below.