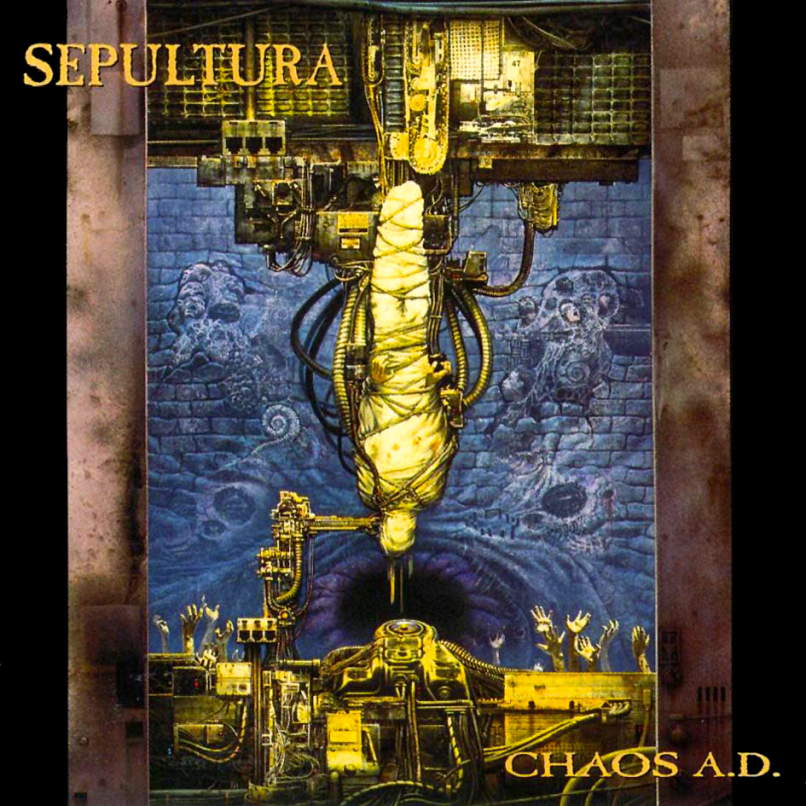 With their fifth album, Chaos A.D., released October 19, 1993, Sepultura effectively announced to the world that metal could fuse with and absorb “native” musical elements from anywhere. Although Sepultura had previously flirted with the rhythms of their native Brazil, most notably on the song “Altered State” from 1991’s Arise, the band had otherwise stuck to emulating the straight-ahead jackhammer approach of its European and American influences. In fact, band members Max and Igor Cavalera, Andreas Kisser, and Paulo, Jr., had actively resisted the idea of blending heavy metal and samba, a move they would have seen as distasteful and a pandering to “worldbeat” stereotypes.

But by the time the band decamped to the isolation of South Wales under the guidance of producer Andy Wallace, they finally felt comfortable allowing an array of Brazilian rhythms they were well familiar with to seep into their writing. (Ironically, this gaze back at the sounds of their home country coincided with the band’s relocation to the American city of Phoenix, Arizona.) On tunes like “Refuse/Resist” and “Territory,” the Latin sway merges seamlessly with violently heavy downtuned guitar riffs. “Territory” in particular, which opens with a Latin-tinged drum pattern from Igor Cavalera, showcases Sepultura’s increased proficiency at adding space and accents that sounded immediately exotic to metalhead ears. Early in the song, the band plays a stuttering riff that one can sing out loud, Beavis and Butt-Head style, only at a faster tempo and with shifting accents. Not long after, the band inverts the same riff — Sepultura had stuffed the previous album, Arise, with highly technical playing, but this one change in “Territory” was something altogether different, showcasing just how rhythmically adroit and subtle the band had become.

And, in the most glaring example of the band exploring new avenues — what Andreas Kisser described as the “first time we put 100% Brazilian influence” in a song — the all-acoustic instrumental “Kaiowas” features pastoral, almost medieval guitars over thundering tribal drums. A tribute to Guarani-Kaiowá people who committed mass suicide in response to the Brazilian government’s incursion on their land, the track was recorded in the open-air ruins of a castle in the Welsh countryside. In a dramatic conclusion, one hears the sound of seagulls squawking overhead with church bells ringing in the distance — a shockingly picturesque moment right smack in the middle of a gnashing, caustic, highly abrasive album. By the same token, the fact that Septultura chose to keep the ambient sounds on “Kaiowas” highlights the band’s newfound affinity for texture of all sorts. After touring the U.S. and Canada at the bottom of a bill with Ministry and Helmet in 1992, Andreas Kisser felt inspired to try and translate Ministry’s electronic vocabulary to the guitar for an organic take on mechanistic noise.

Likewise, the influence of Helmet’s signature downtempo chugging rears its head, as well, with the band nodding to Helmet’s iconic “In the Meantime” riff not once but twice on the songs “Territory” and “Amen.” Coming off the progressive death metal stylings of Arise, the significantly slower tempos and more straightforward song structures on Chaos A.D. marked a huge, even drastic departure for Sepultura. Ditto for the album’s shades of hardcore punk and industrial, as well. Chaos A.D. also signified a decisive shift from a stereotypically “metal” lyrical outlook to topical subject matter.

As Max Cavalera told MTV just before the album’s release, “We traveled a lot in different countries, which gave us a lot of knowledge to talk about different topics.” Cavalera had basically said the same thing after the release of Arise, but there’s no denying the expansion of scope on Chaos A.D., which deals with subjects like the bloody revolts then unfolding in various parts of the world (“Refuse/Resist”), the standoff at Waco (“Amen”), a massacre in a Saõ Paulo prison (“Manifest”), the abuse of biotechnology (the Jello Biafra-penned “Biotech Is Godzilla), and humanity’s long history of imperialistic conquest (“Territory”). In the video for “Territory,” the band addressed the Middle East conflict from an impartial perspective.

“There’s people with the same thoughts as us in different countries. I think we could live in Jamaica or India, and it would still be part of us — the way we think and the way we play,” Max said in the same MTV interview. “You hardly see any of us getting pissed off or violent in real life, but you see us getting into that mode live.”

Producer Andy Wallace opted to capture that live energy on tape, eschewing the band’s previous working method of building the songs in layers via successive rounds of overdubs. The result is the most raw and immediate album of Sepultura’s up to that point. (Fudge Tunnel’s Alex Newport, also a producer in his own right who would soon thereafter collaborate with Max Cavalera on the Nailbomb side project, also visited the studio to help establish guitar tones.) Wallace first came to prominence as an engineer on several Rick Rubin-produced projects like Run-DMC’s Raising Hell, The Cult’s Electric and, most notably, Slayer’s Reign in Blood. He had even mixed Arise, and by 1993 he was in the midst of a career hot streak that included credits like The End of Silence by the Rollins Band; Rage Against the Machine’s self-titled debut; Bricks Are Heavy by L7, Helmet’s Meantime, Fishbone’s Give a Monkey a Brain, and Nirvana’s Nevermind. After Chaos A.D., he would go on to work with Toadies, Bad Religion, Shudder To Think, Faith No More, and Jeff Buckley.

By the time Chaos A.D. hit the public, the seismic shifts from the rise of alternative music had been underway for upwards of three years. The impact on metal artists was striking. Several key figures in thrash have spoken over the years about how the sea change impacted metal in a negative way, buying into the narrative that Nirvana and alternative music essentially killed the metal wave Sepultura emerged from. Chaos A.D., however reached gold sales in the U.S. even as bands like Metallica, Megadeth, Anthrax, and most of their peers in thrash metal movement abandoned the speed that had defined them in favor of a simplified, more traditional “rock” sound. Compared to, say, Metallica’s “Black Album”, Sepultura were able to simplify without actually compromising any heaviness. The success of Chaos A.D. suggests that maybe those other bands had more of a hand in their own fate than they either realize or care to admit.

In any case, the album established Sepultura as an international household name and put them on a shortlist of Brazilian artists recognized throughout the world. Today, from an international perspective, Sepultura can — and must — be mentioned in the same breath as the likes of Joaõ Gilberto, Caetano Veloso, Antonio Carlos Jobim, and Seu Jorge — an almost ludicrous achievement considering the giant stature of those artists in their home country. Though the band’s profile outside Brazil had been rising steadily for more than five years up to that point (thanks to an enthusiastic network of tape-trading metal fans who kept in touch by sending each other cassettes in the mail before the internet), Chaos A.D. clinched the band’s worldwide success. It also arguably started the ball rolling for likeminded metal bands from any corner of the earth to feel like they could infuse their music with sounds native to where they were from.

“It’s all chaos, man,” Max Cavalera said in a presskit video issued with the album. “It’s all fucked-up shit.”