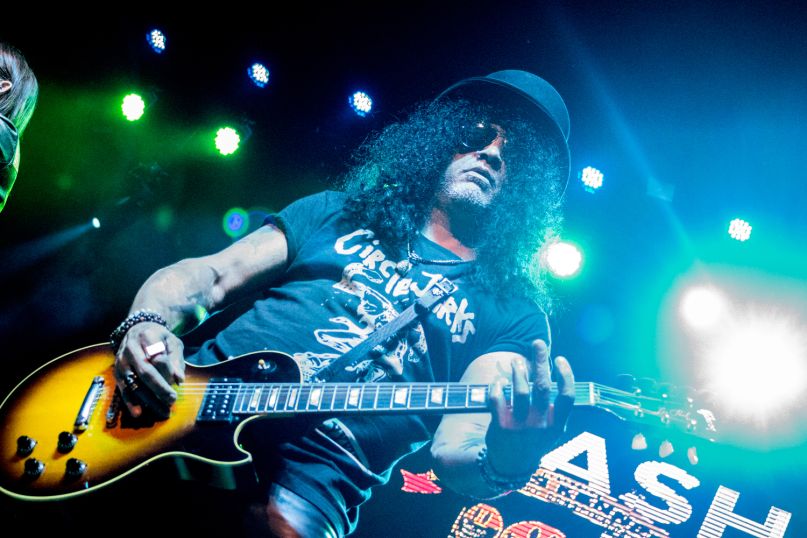 Slash reveals that he was skeptical at first when he heard that his Guns N’ Roses bandmate Axl Rose would be fronting AC/DC, but says that Rose “pulled it off.” In the same interview, the guitarist says he “would love to see a Guns record get done.”

Speaking with the Los Angeles Times (as transcribed by Blabbermouth), Slash remarked: “The Axl-doing-AC/DC thing, I went and checked that out, and it was awesome. I was probably as skeptical as anybody because of the iconic status of the band, and he pulled it off and it was great.”

While Axl filled in admirably for AC/DC in 2016 when singer Brian Johnson was forced to bow out of the band due to the risk of total hearing loss, recent reports suggest Johnson has reunited with his AC/DC bandmates.

Slash, meanwhile, is currently on tour with his outfit Slash Ft. Myles Kennedy and the Conspirators, in support of their new album Living the Dream. The guitarist will rejoin GN’R for a series of late fall shows that will conclude with the band’s first-ever concert in Hawaii.

Asked about his plans for 2019 and beyond, Slash revealed, “Next year is all touring [with The Conspirators], but going beyond that, obviously I’m not going to not mention wanting to do a Guns record along the way. It’s not a personal challenge or anything, but I would love to see a Guns record get done and have it be, to us, really great. That would be awesome.”

He added, “I’m looking forward to The Conspirators tour. I’m really happy with the record. For the most part, that’s it — do this tour, let’s hope for a Guns thing, let’s just keep it all going.”