Awkwafina, Travis Scott, and the Trump brothers can't save another late-night snooze fest 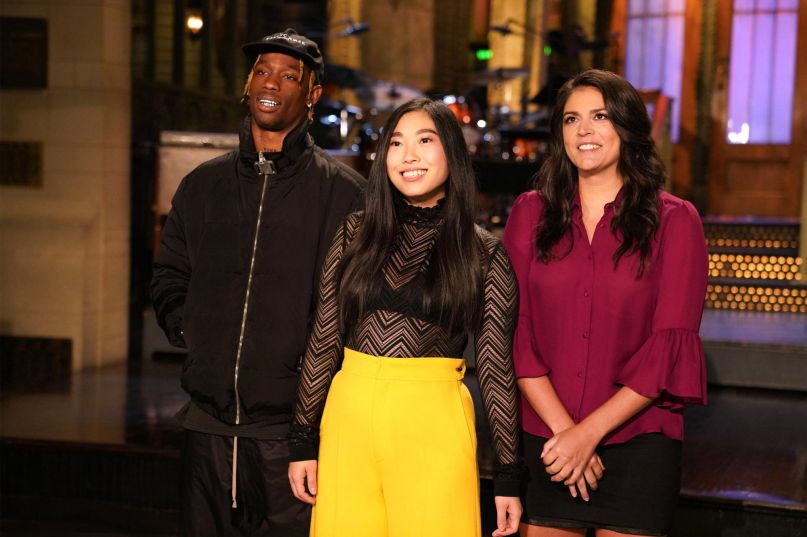 How lackluster was last week’s Season 44 premiere of Saturday Night Live? Well, the only things people were still talking about come Monday were Matt Damon’s bro-tastic impression of Judge Brett Kavanaugh (not that we ever need to see it again or want to relive any portion of the past two weeks) and an embarrassing Kanye West rant that took place after the cameras had quit rolling and America had gone to sleep. A week later and, for the life of me, I can’t remember anything else that happened other than something about Pete Davidson and Ariana Grande. Shrugs. Maybe they’re dating or something.

This week, SNL returns with rapper and Crazy Rich Asians co-star Awkwafina, musical guest and hottest hip-hop artist on the planet Travis Scott, and the perpetual hope that comes with a show that once survived the Joe Piscopo years. Hope that a sketch or two will stick, that a joke or three will land, and that a cast member or several will show a pulse. All I know is that if a show hosted by someone named Awkwafina doesn’t hydrate some water-cooler talk come Monday, then it’s going to be a long, long season.

Hot or Cold Open?: Thank “the male lord” Donald Trump remains sidelined on the cold opens. However, while Beck Bennett’s Mitch McConnell, Kate McKinnon’s Lindsey Graham, and Cecily Strong’s Susan Collins took incisive jabs at the moral cowards they were mocking, there isn’t much humor in watching impersonations of terrible people celebrating one of the darkest days in Supreme Court history and delivering a direct “fuck you” to women and survivors of sexual assault. As McConnell mentions in the skit, Kavanaugh’s confirmation served as a decided victory for “white men over 60 to white men over 70.” Maybe that demographic found this cold open funny as they had the last laugh … again.

The Host with the Most?: SNL’s problem has not been its hosts. Like Adam Driver before her, Awkwafina took fairly humorless roles like Tiny Biggs, Didi the dog walker, and a contestant on “So, You’re Willing to Date a Magician” and squeezed out laughs with her point-blank deliveries and blunt style. Also poignant was her shout-out to actress and former SNL host Lucy Liu, whom she credited with “opening doors” for Asian-American women. Awkwafina hosting tonight’s show definitely felt like a slight win in a recent stretch full of social setbacks.

Musical Guest or Pest?: If Kanye is the most talkative rapper out there these days, then Travis Scott might be the most talked about — and rightly so. The Houston native did nothing less than bring ASTROWORLD to New York City, with Kevin Parker and John Mayer pitching in on a “Skeletons/ Astrothunder” medley and Scott returning for an inspired rendition of “Sicko Mode”, during which he performed from the spinning car of a theme park ride while a gorgeous waterfall effect allowed smoke to pour down from the rafters. And kudos to Scott (aka Lil Bang Bang) for the sick serve he delivered by battle dancing to the Final Jeopardy theme.

Best Sketch: Two episodes into this season and there has yet to be a truly memorable sketch. However, political inserts about a hype crew trying to make Ted Cruz look cool like Beto O’Rourke (good luck!) and, better still, a slam on Trump’s midweek emergency alert and how annoying they could potentially become if abused played a lot sharper — the latter with a great twist of being a Cricket Wireless commercial.

Worst Sketch: Again, not a single sketch here will live on in any meaningful way. If one has to get this dubious distinction, then let’s go with the History Channel’s Hidden Tales of Egypt bit, in which Cleopatra gets a makeover that results in the style we all know today. Like most skits last night, it’s a workable premise that went absolutely nowhere despite Awkwafina’s best efforts to save the scene.

The Real Fake News: Luckily, “Weekend Update” stepped in last night to pretty much save the show. After the cold open offered no catharsis after a nightmarish week on the social justice front, Colin Jost and Michael Che summed up how the bulk of Americans must be feeling: Jost pointing out the brevity of the FBI investigation of Kavanaugh by turning it into a 10-second Law and Order episode and Che both mocking the president’s takeaway that white men are living in “scary times” and calling out the complicity of white Republican congresswomen (“If a white lady in Keds can’t get justice, there’s no chance for my black ass in Jordans”).

Joining Jost and Che were the brilliant duo of Mikey Day and Alex Moffat as Donald Jr. and Eric Trump, a bit highlighted by Eric talking to a puppet named King Funnyface and repeating his father’s favorite joke: “What did the gay, black Jew say?” Pete Davidson, donning a red “Make Kanye 2006 Again” cap, chimed in on Kanye West and related what most of us have been quietly thinking all year long: “Being mentally ill is not an excuse to act like a jackass.”

Most Ready for Prime Time Player: In an extremely thin field, let’s go with Mikey Day for his return as Donald Jr. and his admonishing role of Pat from Pat’s Pumpkin Patch. Remember, the orangest pumpkins are the softest inside.

Verdict: For the second week in a row, the host and musical guests left it all out on the SNL stage. “Weekend Update” hit its mark, and the return of McKinnon’s Debette Goldry, though a bit stale as a premise, was fun to see. But that doesn’t make up for a writing staff and cast that still haven’t proven that they can put together a complete sketch or create something clever or absurd enough to be memorable. While watching Day and Moffat play out their Trump bros. bit to perfection, I noted how little chemistry there seemed to be in most sketches and how so many skits seemed less like ensemble pieces and more like scenes with just a lot of people doing their own thing. As always, until next week.