TV Review: The Romanoffs Suffers from an Early Identity Crisis 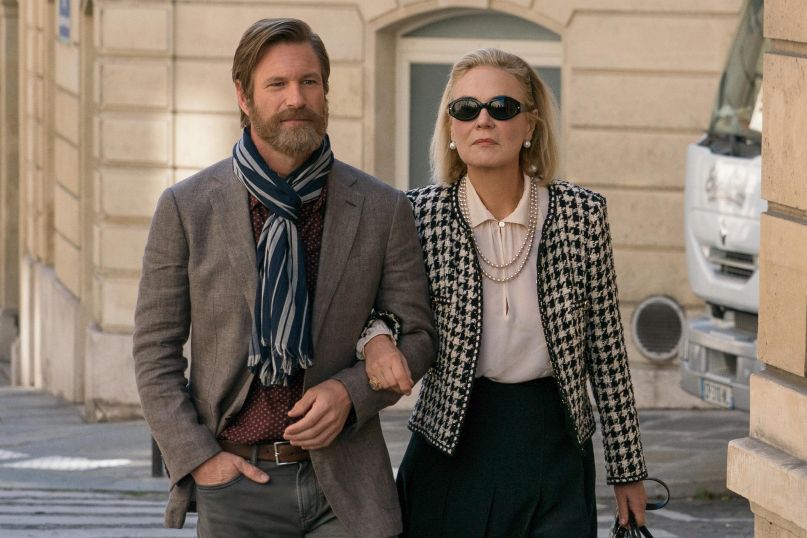 The Pitch: Matthew Weiner, of Mad Men fame, has put his finger on a something big in the cultural zeitgeist with his new show, The Romanoffs, which is a fictional account imagining how claimed descendants of the Russian royal family live today. It’s the perfect time for such a dissection since DNA tests are becoming ubiquitous — hell, Elizabeth Warren released her DNA results just a few days ago. As our world becomes more globalized, many are looking backwards to understand their identity. So, why not explore this phenomenon with a backdrop of murder, high society, and an all-star cast (Aaron Eckhart, Isabelle Huppert, Christina Hendricks) Weiner seems to ask. In eight roughly 90-minute episodes to be released weekly on Amazon Prime, we’re invited to do just that.

Not Your Granddad’s Family Reunion: The first time we get a glimpse at just how global, and oddly organized, this “Yo, I think Nicholas II might be by great-great-great uncle” phenomenon is, is in episode two, when Michael Romanov’s (Corey Stoll) wife, Shelly (Kerry Bishé), arrives on a cruise ship for the annual Romanov Family Society convention. In an homage to Game of Thrones, there are little people on stage mockingly acting out some of the everyday dramas the royal family were known for. There’s Bollock dancing, gowns, and fine dining. And since Shelly’s husband’s at home, there’s obviously a red-hot affair with another apparent heir.

Before you feel too bad for Michael, you should know he’s having his own affair back home. In fact, he’s intentionally prolonging jury deliberations — aw shucks, he was stuck with jury duty alongside an irresistibly attractive woman, Michelle (Janet Montgomery). They have their own fling. There’s just a lot of flinging in this episode.

While there may be some criticism to be had that Weiner almost seems to use extramarital affairs as a narrative clutch (we’ll never forget Playboy Don Draper, and episode one of The Romanoffs finds Aaron Eckhart chasing his aunt’s Muslim housekeeper), the real criticism is that removing Michael from his own family reunion makes the Romanov tie-in sort of irrelevant. Who cares about watching a descendant’s girlfriend learn more about the family (which by the way, anything informative to be gleaned by this show is only surface level)? For a show that’s about identity, the mirror in episode two sadly gets placed on the wrong character.

Why So Serious?: In a recent interview, Weiner told Town & Country “This (show) is about wondering, who am I?” But maybe part of the problem with The Romanoffs’ initial reception is we’re all taking it too seriously. However, you’d have to forgive audiences for being confused on the tone. Episode one focuses on a somewhat insufferable, elderly Parisian woman named Anushka (Marth Keller) who’s at a point in her life where she needs a caretaker to help her about (although one gets the impression from her fine apartment decor that she’s employed a maid or two in her day).

The agency sends over Hajar (Inès Melab), a young Muslim woman putting herself through nursing school. The racial tensions are immediate and brutal, but the two eventually find a fondness for each other. “So this is a serious drama,” the viewer may decide. Au contraire, dear viewer. It’s not until the episode’s final act that the rags-to-riches Cinderella story gives way to something of a farce.

Weiner seems less interested in exploring issues of race or faith and more interested in using Hajar as a foil to the extravagance that is Anushka and family. The sweeter the comeuppance when one of them falls and Hajar prevails. But when the plot twist comes, and we learn this show is really more surface than substance, it’s hard not to feel a little disappointed. At least in episode one, Inès Melab is so committed to the role that it’s hard to turn away. But future episodes don’t maintain the same pull.

The Verdict: If you’re the type of viewer who renews a streaming site just long enough to binge watch the latest hot show, this is now the one to renew your subscription for. There’s little to no history for the history buffs. The Romanov hook seems more like a writer’s prompt than an essential element of each episode. The tendency to build up tension with a hot, illicit affair hopefully doesn’t keep repeating after episode two, because Don Draper did it better, and really it’s just not the cultural moment we’re in. Since the show doesn’t seem all too sure of its own identity, it’s probably best to just drop in for the episode or two that features cameos by actors you love.

When’s It Playing?: A new, hour-long episode of The Romanoffs drops every Friday on Amazon’s Prime Video.