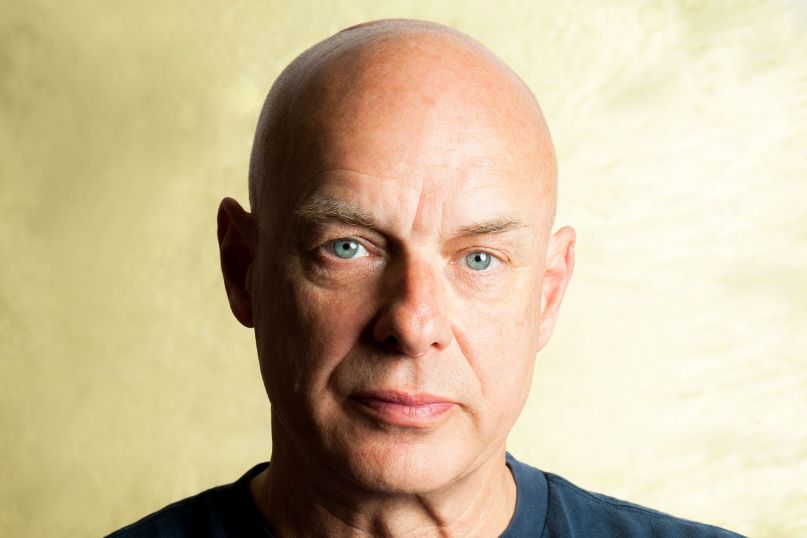 This article originally ran in April 2016. We’re revisiting in celebration of a slew of Brian Eno’s best work getting re-released on vinyl this Friday.

Whether you know him as the godfather of electronica, Roxy Music and Bowie’s secret weapon, or that really cool beep boop guy with the cats, there is only one Brian Eno. Simply put, he is an experimental icon in the world of music — an avant auteur defined by his idiosyncratic interests and involvements. Eno’s career has been defined by his glorious glam rock, his beauteous digital techniques and tones, and his collaborations with great artists like David Byrne and U2 among many others.

In that spirit, Eno and films were always going to be a match made in heaven. A sonic, ethereal, peaceful, relaxing, chilled-out, becalming, good-vibe-inducing sort of heaven. Besides, the guy did release several albums under the title of Music for Films; for goodness sake, how was Eno not going to find his way to the silver screen? Today, we’re going to reflect (somberly, of course, with a soft pillow in a quiet room if possible) on some of the finest uses of Eno’s music in the movies.

However, before this spiritual journey begins, here are a few quick rules:

01. “Once in a Lifetime”, “Heroes”, U2 songs … all that stuff is out. The track in any respective movie’s got to be “by Brian Eno” in some form. And besides, as fantastic as Bowie and Byrne are, well, their songs are a little played out in popular films.

02. No original scores. Eno’s got 51 composer credits, and sometimes he’s listed as a composer even if he’s just using old tracks. Our list will look specifically at tunes that are either from Eno’s albums or made for a specific soundtrack. So, for example, Me, Earl and the Dying Girl might be on the list because it uses past tracks, even though Eno’s the film’s credited composer.

Eno’s songs all enhanced these films in some way. Whether it was a perfect cue or a tune that simply improved a film on rocky ground, these Eno tracks made movies a little better.

For the best and most blood pressure-lowering results, read this list while listening to Ambient 1.