The song is given a heavenly rendition on Europe's largest carillon 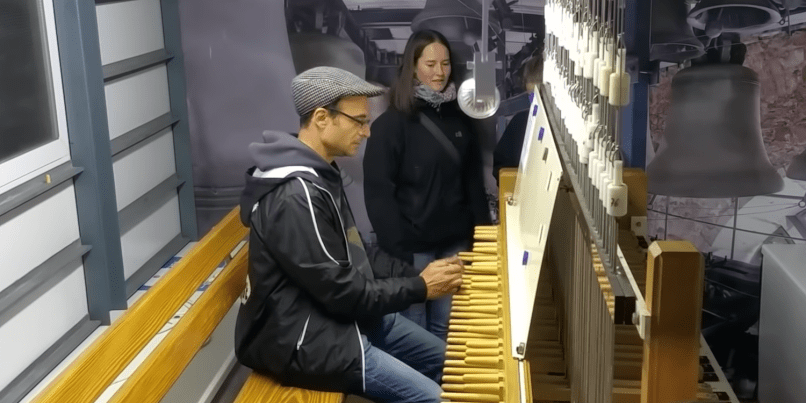 How do you make AC/DC’s “Hells Bells,” inarguably one of the greatest album openers of all time, sound even more dramatic? Play the song on actual bells.

A video popped up online yesterday of musician David Drambyan performing the classic rock tune on Europe’s largest carillon, or a set of bells, usually set inside a church tower, that are played using pedals and a keyboard-like set of levers. This particular instrument is located in Halle, Germany, within the Roter Turm, or The Red Tower, a church built in 1506. The carillon was installed in the building in 1999 and features 76 bells. And while it is the largest in Europe, it is the third largest carillon in the world, beaten out by the instrument at Hyechon College in South Korea and one in the Tower of the Apostle Kirk in Bloomfield Hills, Michigan.

Drambyan hails from Armenia but has been living in Halle, Germany, since 1998, studying sacred music and musicology. While his first instrument was the classical guitar, he has been training as a carilloneur at the Roter Turm since last year. From the sounds of this fun little clip, he’s just about mastered this instrument. Can we request “Holy Diver” next?

As for AC/DC, while things have been relatively quiet in their camp since the end of their “Rock or Bust” tour, there have been plenty of rumors swirling around about the band’s future to keep their fans salivating. Back in August, photos emerged online that seemed to suggest that singer Brian Johnson and drummer Phil Rudd were back in the fold.

The picture, taken by a fan outside a recording studio in Vancouver, British Columbia, would appear to be the two men having a laugh together. Another photo taken by the same fan caught founding guitarist Angus Young and his nephew Stevie having a smoke break outside the studio. The latter has been the band’s rhythm guitarist, taking the place of his uncle, the late Malcolm Young, in 2014.

Johnson was forced to leave the band in 2016 as he was potentially facing “total hearing loss” from the toll of touring. His replacement was none other than Guns N’ Roses frontman Axl Rose. Rudd, on the other hand, was unable to be a part of the Rock or Bust tour due to ongoing legal issues in New Zealand. He has since served eight months of home detention and, in a 2016 interview, has said that he has been seeing a therapist and is “as positive as I can be now that I’ve given up the crazy shit.”

There’s no word yet from AC/DC’s camp as to whether a new album is on the way or what Johnson and Rudd’s roles might be in the future of the band.