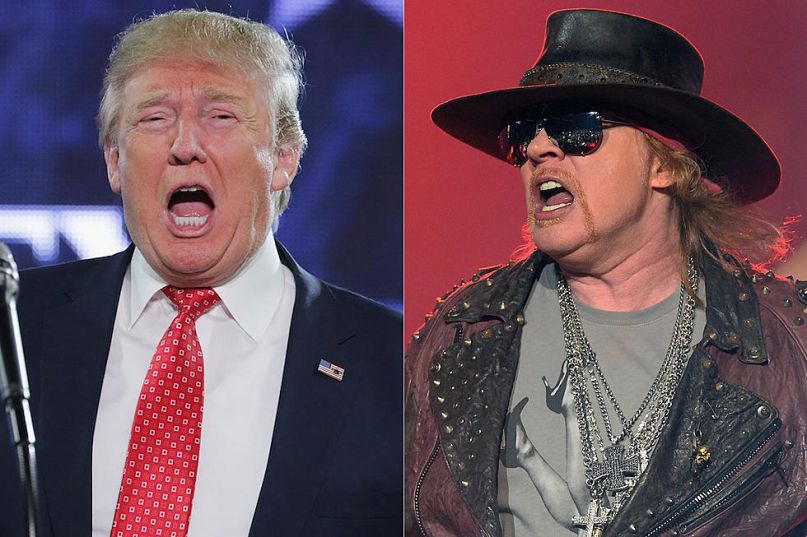 Donald Trump’s having a tough time in pop culture. Over the last month alone, he’s been mocked by Will Ferrell, shunned by Taylor Swift, “cuckolded” by T.I., roasted by Tim Heidecker, bludgeoned by GWAR, and ghosted by Kanye West. That’s all without mentioning the multiple cease and desist letters he’s received from both Prince’s estate and Pharrell, making his obnoxious rallies that much more difficult to soundtrack.

Well, now he can officially skip over Guns N’ Roses, too. Early Sunday morning, frontman Axl Rose, who has been incredibly vocal about his disdain for Trump in the past (especially over his former bromance with Yeezy), went off on his Twitter account, lambasting our Commander in Chief for using his hit song “Sweet Child O’ Mine” at a rally he held on Friday and shedding light on the “loopholes” the “shitbags” use.

Unfortunately the Trump campaign is using loopholes in the various venues’ blanket performance licenses which were not intended for such craven political purposes, without the songwriters’ consent.

And when ur phone’s blowin’ up cuz peeps r seein’/hearin’ Sweet Child on the news at a rally… as a band we felt we should clarify r position. Peace!????????