The shirt was worn to commemorate Korea's Liberation Day 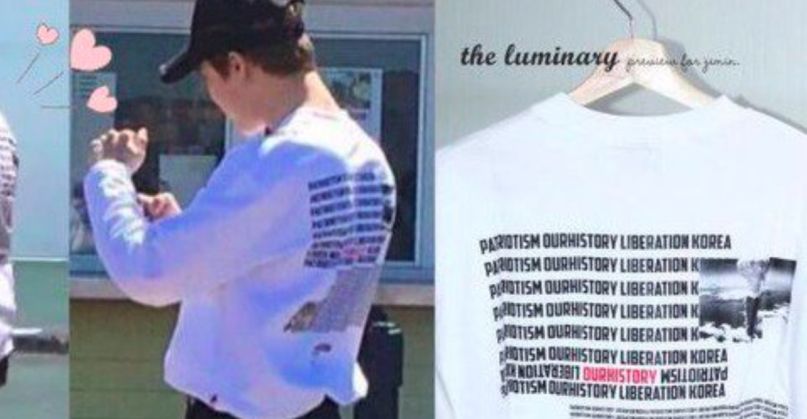 Americans have gotten fretfully comfortable with how old actions can affect present careers if enough Internet Outrage is stirred. We can take some solace that it’s not just an issue in the States, though, as Korean pop stars BTS had a Japanese TV appearance axed thanks to a T-shirt depicting the atomic bomb.

There are conflicting reports about whether band member Jimin wore the shirt this past August or last year to celebrate Korea’s Liberation Day, but either way it’s the imagery of the attire that’s become the issue. The shirt features the words “Patriotism Our History Liberation Korea” repeated next to an image of an atomic bomb’s mushroom cloud (though it’s hard to tell, it appears to be the Nagasaki explosion) and a picture of Koreans being liberated from Japanese colonialism. Japan ruled the Korean Peninsula from 1910 until the end of Asia’s involvement in World War II, which was brought about when Japan surrendered following the USA’s use of two atomic bombs.

The decades of colonial rule have resulted in cultural tension between Japan and Korea, especially with the latter’s liberation tied so inextricably to the most horrifically deadly act in wartime history, as perpetrated against the former. When images of Jimin in the shirt went viral earlier this month, #Unforgiveable and #AtomicBomb began to trend on social media. In response, Japan TV Asahi’s Music Station program pulled the plug on BTS’ scheduled appearance for Friday.

Lee Kwang Jae, the designer of the shirt, issued a statement after learning BTS had canceled their trip to Japan. Via Metro, he said,

“I did not include that part to mock Japan. I did it to express the historic truth and timing that after the atomic bomb was detonated, Japan’s unconditional surrender led to independence. After I found out, I was very flustered and apologetic. I had no intention to promote anti-Japanese sentiment, and so I’m very sorry towards BTS.”

Incidentally, the shirt has subsequently sold out.