Classic Film Review: Thirty Years Ago, They Live Saw Where America Was Headed 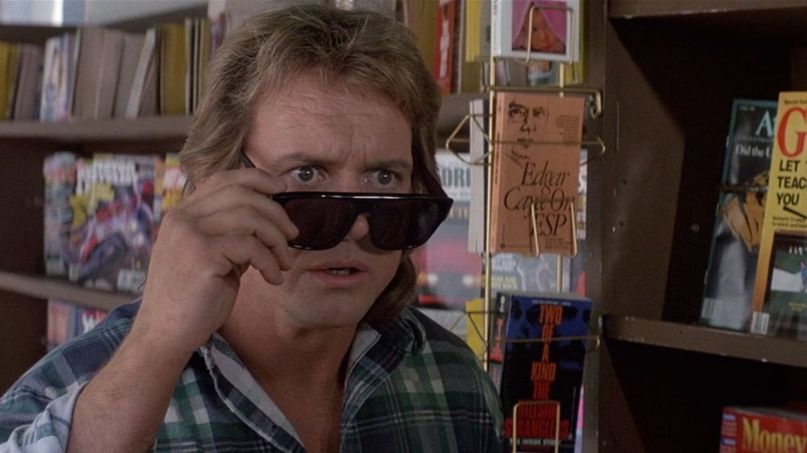 Thirty years ago, John Carpenter was nearing the end of the 1980s, a decade full of both success and struggle for the renowned genre filmmaker. Sure, Carpenter’s name is as synonymous with the sound, look, and feel of that cinematic era as any notable director, but he also tended to struggle mightily against a studio system that had discovered blockbusters and begun to homogenize American movies all around. Carpenter was too singular a filmmaker for what Hollywood had become by the end of the ’80s, and after Prince of Darkness struggled to make an impact in theaters, Carpenter did what he hadn’t since Halloween made him a household name. He went indie once again.

The result was They Live, one of the most immediately recognizable Carpenter movies and a landmark work of political subversion in American filmmaking. The story of Nada (the late Roddy Piper) being awakened to just how deep the evils of the world really go, They Live takes a ham-fisted metaphor and delivers it with such aggression and urgency that it becomes something bordering on transcendent. That it’s also a decidedly John Carpenter movie, with all the swaggering music and occasional cheese suggested therein, only adds to the universality of its argument. Born of everything from the rise of unchecked American capitalism to the Reagan era, Carpenter puts forth a vision of a world where the hero can’t really save the day. The world’s already been subsumed; the only thing left to do is show people the truth, and let humanity solve the problem itself.

Like so much of Carpenter’s work, They Live is a staunchly working-class film in both tone and place. Set near Skid Row in Los Angeles, the film is entirely concerned with the lives of people at street level, hustling to get by in a society that privileges wealth and demeans its impoverished. Nada is a drifter, blowing into town in search of construction work. He lands some thanks to Frank (Keith David), but it’s hardly much. Everybody in Carpenter’s L.A. is scraping, living in pop-up encampments and hoping to keep getting by without being hassled. Yet before long, the police show up to tear down the shantytown, which sends Nada into a nearby church secretly run by radicals. Instead of weapons, Nada finds only a pile of sunglasses. It’s not until the next day that Nada puts the glasses on, and realizes exactly why they’re so valuable: the sunglasses allow the wearer to see through the propaganda of the world, and see just how many hideous, skeletal aliens have infiltrated our everyday lives. From police to bankers to talking heads on your TV, the majority of the world’s most powerful people are out to brainwash you into consumption and obedience.

In one sense, it’s the best and easiest way for Carpenter to get a never-hunkier “Rowdy” Roddy Piper into some sweet shades for the better part of an hour and a half. In another, They Live makes the process of understanding sociopolitical corruption into the stuff of paranoia-fueled throwback horror cinema. In both structure and aesthetic (particularly in the retro alien designs), They Live is built to resemble the “aliens among us” panic of Invasion of the Body Snatchers and so many other fearful stories of humanoid infiltration. After all, for so many people, one of the great terrors of life is reaching an age or moment where you come to realize just how much corruption and perversion and exploitation and filth exists in any given society, and have the subsequent realization that most people either don’t care, or are actively complicit in the process. They Live might well be one of the most literal movies ever made, but it faithfully captures the terror of that process, in all its sloppiness and panic and occasional absurdity.

If we’re invoking “absurdity” as a concept, we cannot move on with this classic review without addressing the centerpiece action sequence of the film, the famous battle between Nada and Frank as Nada attempts to make Frank wear the sunglasses. No volume of prose can do justice, so just have a look for yourself:

In Piper, Carpenter finds the perfect action hero for his brand of filmmaking. He’s jacked, hyper-masculine, and more than a little bit of a goof without any traces of the self-effacing wink that modern leading men tend to bring to their roles. There’s an unassuming obliviousness about everything from Piper’s performance to the staging of the aforementioned fight to the simplicity with which Nada rallies around the cause that makes They Live one of the more accessible leftist films ever made. There’s no posturing about They Live, and if it gives the film a bit of a cornball quality on occasion, that’s ultimately secondary to the impact of Carpenter’s purpose. This was a film about something already omnipresent in the culture, something that would only grow in time. To make They Live in the present day would be impossible, because it’s the kind of thing we nihilistically take for granted. We’re aware that our politicians are corrupt, that the intentions behind so many of our daily lives are corrupt. At least in ’88, we could still muster up the energy to get scared of that fact.

Like the best horror movies, They Live has only grown more prescient with time. Its message is so universal, in fact, that Carpenter had to come forward last year to explain, as clearly as possible, what it is and is not about:

THEY LIVE is about yuppies and unrestrained capitalism. It has nothing to do with Jewish control of the world, which is slander and a lie.

The terrors put forth by the film are at once specific to the era of its production and timeless in their direct connection to the American experience. After all, what’s so different between election week 1988 (when the film was initially released, just days before George H.W. Bush took over for Reagan) and right now, with midterm election week 2018? We might not need the glasses anymore, but the skeletal beasts are everywhere. Carpenter saw where the industry was heading, and America right with it, a long time ago. As the film ultimately concludes, it’s up to the individual to stand up to the forces of inequity. Nobody else is going to show up to do it for you.