Film Review: Boy Erased Finds the Humanity in the Despair of Anti-Gay Therapy 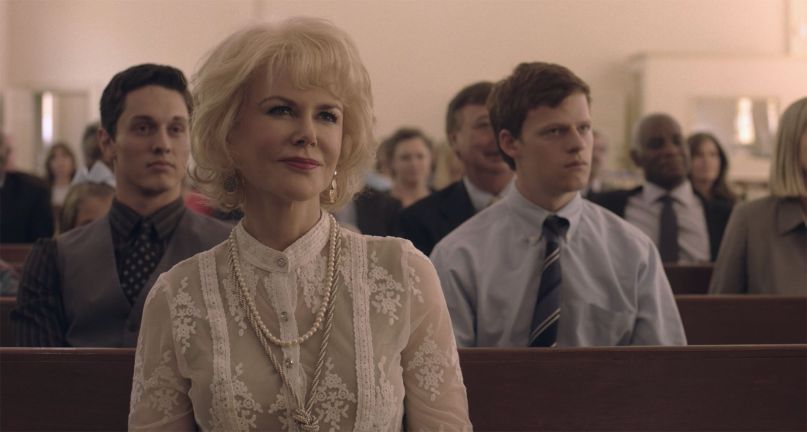 The Pitch: Jared Eamons (Lucas Hedges) is no different from any other American teenager coming of age. He goes to church with his loving mother Nancy (Nicole Kidman) every Sunday, to listen to the sermons from his father Marshall (Russell Crowe), a Baptist preacher with a rapidly growing congregation. He excels in school. He works at his father’s car dealership, which’ll one day become his own. He has a girlfriend, but is also working through his sexuality like so many people at his age. But in the kind of small American town where the Eamons family lives, that last part is anything but normal. When Jared finally confesses to his family that he has thoughts about men, sorrowfully apologizing all the while, Marshall decrees that there’s only one way Jared can ever be allowed to return home again: by enrolling him in a “conversion therapy” program.

In Pursuit of the Truth: Based on Garrard Conley‘s best-selling 2016 memoir, Boy Erased takes an appropriately delicate look at one of modern America’s most unsettling commonplace practices. A dominant majority of U.S. states still permit anti-gay therapy, with 36 states (as of this writing) having no laws against the practice. Boy Erased makes it abundantly clear, early and often, that this is a repugnant practice, but it’s also keenly observant about the social structures that continue to uphold it. Within hours of Jared coming out to his parents, his kitchen is full of high-level priests, who advise Marshall on how to “discipline” his son. Nancy, a dutiful preacher’s wife, refuses to challenge her husband’s ruling even as the evidence continues to mount that there’s nowhere near as much wrong with Jared as there is with the program itself.

After all, programs like the one Jared is sent into often tend to function the same way. Under the stern eye of Victor Sykes (Joel Edgerton), the young charges (almost all male, with exceptions) are masculinized as aggressively as possible. They’re run through military drills relating to their posture, in the hopes of forcing the “softness” out of their bodies. Sykes forces them to confront him as though he’s their fathers, allowing them to vent their rage at having been so inadequately raised that they wound up gay. They’re not allowed to speak to each other except in group sessions, for fear of their urges taking over yet again. They’re encouraged to make flow charts of all their family members’ personal failings, from addiction to domestic violence to the enjoyment of pornography. Those are the least of the methods that Boy Erased illustrates, but from its earliest scenes, the film makes a compelling case for the ways in which this therapy is an active form of abuse.

The Pains of Being Pure at Heart: Boy Erased is endlessly earnest in its messaging, and if the film occasionally does verge on treacle, it’s certainly in service of a noble cause. In adapting Conley’s memoir and directing the feature, Edgerton wisely underplays some of the film’s more melodramatic sequences, allowing Hedges’ nervous and sincere performance to take center stage instead. Hedges, who’s been so great in a number of acclaimed films over the last few years, removes so much of the assurance that’s defined him onscreen to date in his turn as Jared, and that lack of assertion plays out to poignant effect throughout the film. Whether it’s in a seeming meet-cute with another clearly closeted young man on his college campus, or in his attempts to find some kind of common ground with the other kids in the program, he’s always chasing after something he can’t quite understand and collapsing under the frustration of not being able to understand it.

That purity of intention and performance hums through the entirety of Boy Erased. This is a Message Movie in capital letters, and while it’s easy enough to be cynical about this sort of film, it’s also the kind of film that attempts to co-opt old cinematic forms in favor of telling a brutally modern story. The film has an air of prestige about it, from its casting to its filmmaker to its status as an adaptation of a well-known nonfiction work, but Boy Erased finds its best stuff when it matches the unabashed earnestness of Jared, and of Hedges’ performance. The film isn’t so much preaching to the converted as begging the ones who aren’t yet to finally come over and stand on the right side of history.

The Verdict: Conversion therapy isn’t exactly a both-sides issue, but Boy Erased is wise enough to complicate its approach to the topic in some crucial ways. While it’s pretty clear about the ways in which Nancy and Marshall are responsible for letting their son down, the film isn’t so simplistic as to paint them as outright villains. The closest thing to that onscreen is Victor, who Edgerton plays as a snarling gym teacher from hell, and another figure that Jared meets earlier in the film. His mother, on the other hand, is played by Kidman as a woman sharp enough to know that something’s very wrong with the program, but too accultured to deferring to her husband to get more actively involved. Even Crowe, as the kind of blowhard preacher whose own sermons occasionally seem to contradict themselves, finds a soul in Marshall as a man whose very understanding of right and wrong in the world is being challenged in one of the most direct ways possible.

Boy Erased may occasionally attempt to rally the troops (its lengthy end titles offer a couple slices of delicious irony, as well as calls to end conversion therapy as a practice), but it’s primarily in the business of making Conley’s memoir as universal as possible. By rooting Jared’s trials in a sense of common experience, the cruelty of sending him through the process emerges naturally from Edgerton’s storytelling. After all, even if the things he’s forced to endure throughout the film are sometimes devastating in their impact, it’s clear that there’s a part of Jared who knows that nothing is wrong with him. He’s just waiting for the rest of the world to finally see it.

Where’s It Playing?: Boy Erased will begin its limited-release rollout on November 2nd, and expand nationwide in the following weeks.