Film Review: The Potterverse Overextends Itself With Fantastic Beasts: The Crimes of Grindelwald 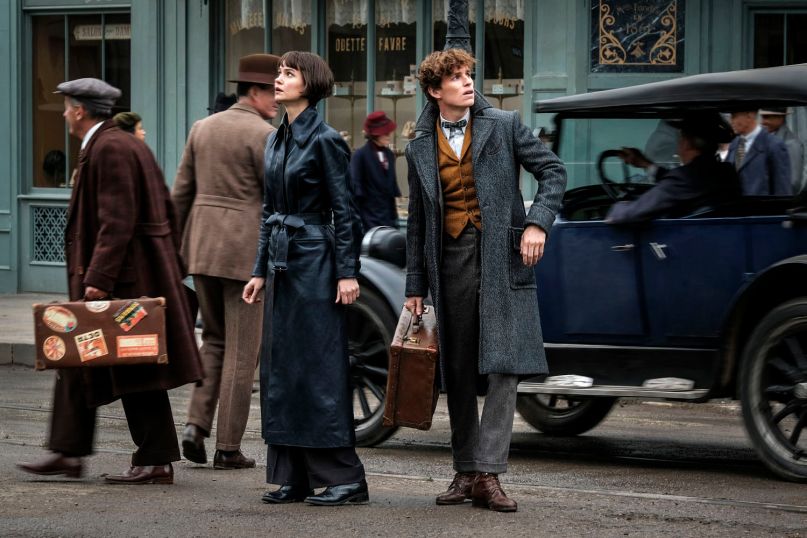 The Pitch: Newt Scamander (Eddie Redmayne) is a Hufflepuff. (If you don’t know what that means, never fear — this is a Wizarding World story that doesn’t really require familiarity with the Harry Potter series, though more than a few of the capitals-required Important Moments may be lost on you.) A gentle soul, he sees the creatures of the world — especially the magical ones — not as monsters, but as beings misunderstood by the humans around them, driven to violence by fear, or pain, or hunger, but never cruelty. That’s a quality that belongs to humans, and he sees it everywhere.

It’s especially rife within The Crimes of Grindelwald. The titular villain (Johnny Depp), though imprisoned at the end of Fantastic Beasts and Where to Find Them, still casts a long shadow in the Wizarding World; that he’s soon wandering the streets should come as no great shock. He has followers as cruel as any Newt has seen, but more concerning are the people with less overtly hateful hearts who are brought, through one manipulation or another, into his fold. His desire to rise above non-magical people — who are not less, but “other,” in his words — threatens to upend more than the Wizarding World, and though a gentle soul like Newt may wish to avoid such battles, his conscience may have other ideas. Well, his conscience, and a young Albus Dumbledore (Jude Law).

So Many Galleons: To point out that The Crimes of Grindelwald is a good-looking movie is like saying that Walt Disney World is a tidy, well-lit place. How much money this thing cost is unclear at present, but it looks every bit as well-financed as its predecessor. Most of the time, that money seems well-spent indeed. Each location drips character, texture, and age, and the effects — particularly when it comes to those fantastic beasts — impress at nearly every turn.

Yet there’s something about this go-around that’s less engaging, even on the level of sheer visual sumptuousness. That’s due, in part, to the necessary loss of discovery present with sequels. Yes, new locations are introduced, but there’s not one door opened as ensorcelling as the initial trip into Newt’s case in the first Fantastic Beasts. We visit new places, meet new creatures (human and animal alike), and explore unseen corners of the Wizarding World, but never does a sense of wonder rear its head. It’s beautiful to behold, but something’s missing all the same, and while calling it empty would be going too far, so too would be calling it captivating. The beasts look fantastic, and their departures are as unwelcome as their arrivals are arresting, but it’s almost as if the movie itself isn’t all that invested, or even curious. We meet them, they’re beautiful and intriguing, and the story moves on, checking a box on the Fantastic Beasts checklist before it scampers off to the next.

Accio Narrative Convenience: As mentioned above, there are certain elements of the story that require prior knowledge of the Wizarding World; if you’re not familiar with, say, Harry Potter and the Deathly Hallows and the dense histories revealed therein, odds are some of the intended climactic moments just won’t seem all that climactic to you. (You won’t be alone in that, but more on that later.) This film really only requires you to have seen Fantastic Beasts and Where To Find Them, and only just. Forgive the dopey joke, but this stuff just writes itself: the biggest crime of Grindelwald is that screenwriter J.K. Rowling is so willing to play take-backsies with the events of the preceding film, and to treat most of the characters created for that film as though they never existed before this one.

They’re prominently featured in the marketing for Grindelwald, so we won’t consider it a spoiler to reveal that Queenie (Alison Sudol), Tina (Katherine Waterston), and Jacob (Dan Fogler) have all returned, in a manner of speaking. The latter had his memory wiped by some magic rain at the end of the last film, though the final moments showed he’d subconsciously remembered the fantastic beasts and turned them into fantastic baked goods. (If you remembered that Jacob Kowalski came home from the war with dreams of being a baker, you’re ahead of Rowling already.) Here, he’s got it all back, more or less, and this major plot point — an emotionally affecting one — is basically waved off within moments. Tina and Queenie, considerably less well-drawn than Mr. Kowalski in the first film, meet a similar fate here, and while the former fares no better than she did previously, she’s at least better off. Queenie is not only bafflingly written, but subjected to Rowling’s single most ineffective yet self-congratulatory storyline. She’s used to make a point, and ceases being a person — and the point doesn’t even pass muster.

It’s bad, but hey, at least it doesn’t render null and void the most resonant corner of Fantastic Beasts. No, that lot is handed to Ezra Miller’s Credence. Miller still turns in a decent performance, though it’s unclear how such a thing is even possible, given what he’s handed. Those who were most affected by Credence’s story — one which shows how hate, abuse, and repression can create destruction and darkness — may wish to skip Grindelwald entirely.

Reducio Johnny Deppenum: The single worst moment in Fantastic Beasts, by a country mile, was that in which Colin Farrell suddenly became Johnny Depp, and for no good reason. (We already knew he was Grindelwald from his haircut, why not just have his hair change color? Then you get Colin Farrell and, even better, you don’t get Johnny Depp.) The scenery-chewing, affected, supervillainous performance promised in those scant moments doesn’t really exist in this film, which despite bearing his name is not overly interested in the greatest dark wizard of the pre-Voldemort era. It’s much more interested in why people follow him, or choose to fight him, or choose to stay neutral; it’s interested, though only slightly, in how those opposing him could turn a thirst for vengeance or victory into a force similarly violent. But those paths, while potentially compelling, are really only gestured toward without ever being truly explored, and the question of why he is who he is doesn’t even get that slight treatment.

What we’re left with is an admittedly cool character design, a performance that ranges from passable to irritating, and a bunch of thorny thematic issues that go mostly uninvestigated. Well, that, and the notion that Rowling, director David Yates, and the powers that be at Warner Brothers faced, as Albus Dumbledore once put it, had a choice between what is right and what is easy. The benefits of choosing the easy option were pretty close to zero, and yet, here we are.

Wingardium Leviosa, actors, if you can: If there’s one person involved here who comes closest to making this film about magic feel…well, magical, it’s Redmayne, whose particular brand of bashful, stuttering charm is once again infused with a palpable sense of tenderness and melancholy. When Newt Scamander acts with gentleness, struggles with anger, conquers fear, or (if only briefly) feels real joy, the story actually feels like a story. And when the film asks him to make absurd emotional leaps, he very nearly pulls it off.

He’s joined in that last category by Zoe Kravitz, given perhaps the heaviest load to lift. That she comes close to pulling it off is a testament to her work, and to Yates, who does his level best to lend her scenes an intimacy not afforded to much of the rest of the film. Other than that, not much can be said, but she does very fine work with a nearly impossible task.

Expecto Verdict: If you’re new to the Wizarding World, or have perhaps only entered them through the films, it’s possible that you’ll leave Fantastic Beasts: The Crimes Of Grindelwald with something resembling satisfaction. Sure, it’s a little hollow. Sure, it’s a thematic mess. Sure, it dismisses much of what made the first film great. But that’s the kind of stuff that will really only rankle if you probe the surface. Should you be content with magic of the massively budgeted, computer-generated kind, then you’ll only need to accept that little else is on offer. Watch the pretty things race across the screen, and float away on their expensive wings.

But if, like this writer, you’ve read these books, and especially if you’ve read them many times, it’s possible your experience might be much less satisfying. Good actors can’t make up for narrative inconsistency. Beasts can’t erase the frustration of seeing characters you love behave in ways that make no sense. One can forgive retconning backstory where it doesn’t belong if it feels true to the fictional world you love. That doesn’t happen here.

Newt Scamander is a gentle soul with respect for all creatures. It’s easy, with this film, to wish that his creator had as much care and compassion for those who populate her world as her protagonist.