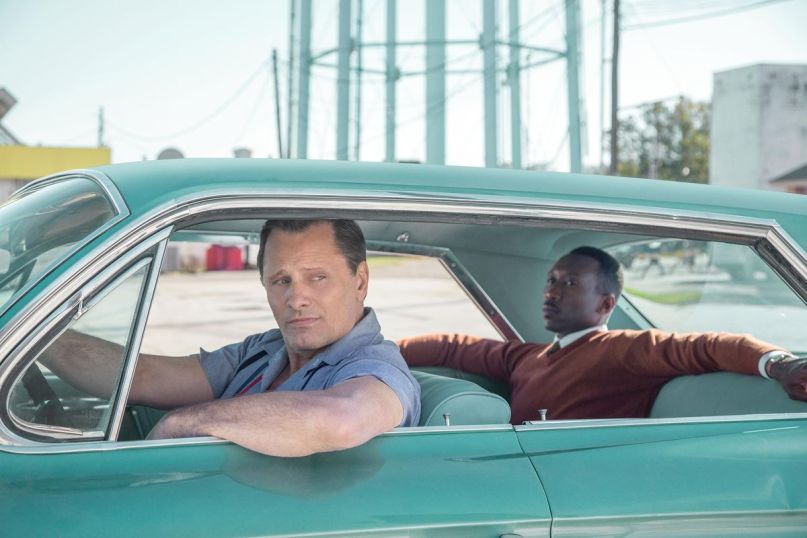 The Pitch: A road movie, a buddy comedy, and a mid-century racial polemic bump into each other at a bar. Here’s Green Book, a new dramedy from 50% of the Farrelly brothers (Peter, here). In the great tradition of many movies “inspired by a true story”, here’s one packed with all sorts of clichés, stereotypes, and other easy cues for holiday season viewing.

Don Shirley (Mahershala Ali) was a gifted Jamaican-born classical pianist who came to prominence in the 1950s and ‘60s. His style was tight, controlled, and yet still rambunctiously fast atop the keys. Shirley was an iconoclast, a piano prodigy since age three with PhDs in psychology whose career lasted for decades. Did you know he performed experiments to examine the links between music and juvenile crime in Chicago? Fascinating guy. But you won’t learn that in this movie.

Nah, we’re here to bust chops and stuff as the stiff, uptight piano man hits the road for a predominantly middle-and-southern American tour in 1962. His driver/muscle/get-out-of-jail-free-card Frank “Tony Lip” Vallelonga (Viggo Mortensen) is along for the ride. They laugh, they learn, they talk fried chicken and drink Cutty Sark. What more do you want, eh?

The Right and Wrong Notes: On paper, this sounds like a rocky road. Driving Miss Daisy for a new era. A staid, attitude-driven road movie. White people get to feel good about themselves as black characters speak about dignity in the face of modern American savagery. A new world friendship, delivered in old-timey ‘60s vernacular to make emotions and social statements easily palatable. Realistically, Green Book ought to be released with a disclaimer, to remind you to question the authenticity of every last curious choice it makes.

For one, the axis of power from the get-go leans toward Vallelonga. He’s introduced first. He speaks far more. He tells broad jokes, and is often given license to lecture Shirley; not only does he tell the musician to lighten up during the tour, but Vallelonga even goes so far as to argue that he’s blacker than Shirley because he grew up on the streets. (That scene in particular, which does try to evolve, will be a litmus test for audiences.) For Shirley, there’s a rich history behind the real-life pianist, portrayed here as a man struggling with his identity at every turn. His intellectualism is off-putting to Vallelonga, and in the film it isolates the artist from both his native black community and the adoring (but distant) white fans he plays for. He’s a prude and condescending (enigmatic and handsome, too), but certainly not fun like Vallelonga. Nothing hugely provocative happens, and the friendship merely seems to suggest that we could all stand to learn something, whatever it is.

But – and this is a considerable but – the two leads carry the the movie. A lot of the jokes, conversations, and small dramatic moments? They land. Green Book, which cannot fully be excused for its ham-fisted attempts at chummy racial discourse, is best viewed as a historical fable. It’s sincerely trying to make a statement in slogan form. Shirley and Vallelonga can get along, which will come as no surprise to just about any 2018 viewer, but the duo sells it.

The two, snippy as they can get, have a certain amount of respect for their differences. Mortensen goes full “black hair and gold chain” stereotype, and he’s fed excessively over-the-top material. Ever see Aragorn house an entire pizza? But he seems to be having such a good time. And with Ali, omissions and innuendo aside, there’s still a certain grace and élan that the Oscar winner gives to Shirley. It’s in his affinity for Steinways, and in his lavish rock star home life. Neither man is a perfect characterization, but maybe that’s the point. They’re solid foils.

Wheel Deal: Peter Farrelly, co-king of crass cinema from 1994-2000, might seem like an odd choice for such a weighty story, but it’s a workable enough fit. For one, he’s thoroughly experienced in road movies. Dumb and Dumber, Kingpin, Me, Myself, and Irene? All movies about odd pairs bonding behind the wheel, and Green Book feels almost like a natural extension.

Those road flicks showed that Farrelly can deliver a joke better than most, and that same knack makes for one of Green Book’s better qualities. A terrible line about Pittsburgh being nicknamed “Tits-burgh” would fail in many a director’s hand, but Farrelly delivers it with dumb confidence from Viggo’s mouth. And Ali, sniping at his valet’s piss-poor letter writing skills, has a certain airy confidence rooted in classical comedy about snooty people. Ali demanding that Frank back up their car to retrieve litter is a nice little side gag on this film’s uneven road. What else are you gonna talk about on long rides? Just joking around is okay, at least sometimes.

The Verdict: Green Book means so well, and admittedly, it just gets by on its leads and its good humor. Perhaps that’s evasive, and we need to be hard on this, for many reasons. Farrelly seems to give give his leads a pass on deep-rooted animosities at times, waving a hand and brushing off deeper ideas with strategically deployed laughs. The actual elements of racism are often handled as either uncomfortable interruptions or stand-offs. One could argue that as curative, or perhaps disingenuous. It’s hard to tell, because there really is an amiable laughability within the film. This is, as the marketing wants you to believe, a feel-good flick. Mostly. Just enough to make you not fold your arms in total disdain at the film’s preferential star treatment of Vallelonga (note: this movie was co-written by his real-life son, so take that with a grain of salt), or its casually PG-13 dissemination of race relations in 1962.

And that’s why it’s perhaps best to see the film as a farce, as bumpy ride through the Jim Crow South where no one truly gets hurt (thank god), bonds are tested and forged, and we all learn a smidgen about ourselves along the way. Green Book gets dangerously close to driving off the road at times, but it still gets to where it needs to go.

Where’s It Playing?: Everywhere for Thanksgiving.