Film Review: Ralph Breaks the Internet, and Goes Chasing After a Pile of References

Disney's retro-minded characters go online, and the transition is as jarring as you'd think 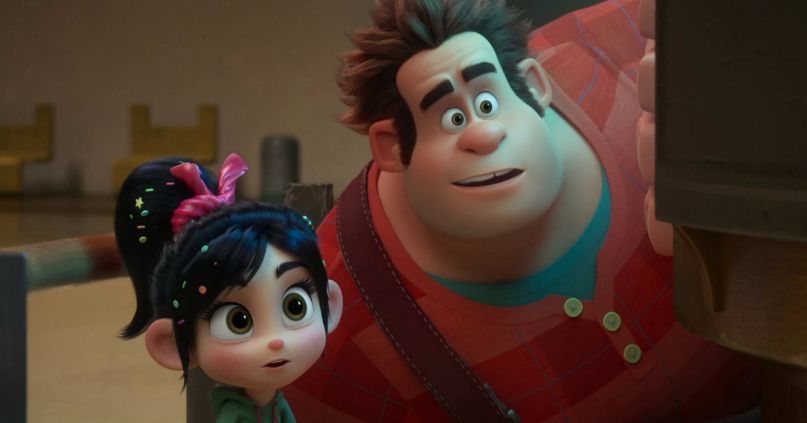 The Pitch: Six years ago, Wreck-It Ralph emerged as one of Disney’s more surprising hits of recent vintage. An ode to all things ’80s arcade gaming, it established Ralph (John C. Reilly) as a new kind of Disney hero: a deeply flawed “bad guy” who doesn’t have to change entirely to be considered good. Now, a few years later, Ralph is so happy in the arcade after self-actualizing that he never wants anything to change, even if his best friend Vanellope (Sarah Silverman) is starting to get bored of the day-in-day-out character grind. So when the owner finally adds a Wi-Fi router to the arcade, it doesn’t take long for the duo to learn that there’s a lot more out there than their world of interconnected arcade cabinets.

A Cavalcade of Cinematic Universes: Welcome to Ralph Breaks the Internet, a soon-to-be hit family movie based on the famous meme image of champagne being poured over a thick ass. The mannered irreverence of Disney’s bid for some of that sweet, sweet viral cachet hardly stops with the title, as the movie quickly sets itself about the task of racing through every in-joke it can possibly get its hands on. Kids make memes about Sonic, right? Here he is, talking wise in a handful of scenes! An online portal called “Oh My Disney” is the central hub for gentle jokes involving every IP the mega-corporation owns. There are cat videos! Dorky video challenges! Fortnite celebration dances! THIS IS THE INTERNET YOU LOVE, CHILDREN OF AUDIENCE, IS IT NOT.

Needless to say, there’s a try-hard quality to much of Ralph Breaks the Internet that feels severely at odds with the genial ease of the original. There’s still a moral lesson in there (a solid one about how even the best friendships can become toxic and controlling), and there’s still some of the sweetness that made the first Ralph so appealing. Much of that emerges from the ease between Silverman’s adorable brat and Reilly’s doofy hero, who continue to deliver something resembling a soul to the movie even when the movie is far more invested in Easter eggs and inside-baseball jokes. Put another way: they’re still performing in a sequel to Wreck-It Ralph. The fact that said sequel bears more than a passing resemblance to The Emoji Movie at points is hardly their fault.

When Memes Become Teams: That derivative quality doesn’t entirely hamper the film, even if it establishes Ralph Breaks the Internet as a distinctly second-tier sort of sequel. Some of the gags are inspired, particularly the already-spoiled reveal of a castle full of lounging, self-aware Disney princesses. Likewise, Vanellope gets her traditional solo musical number, in a form so surprising we’d be monsters to give it away here. (We’ll just say that a princess ballad has never bore such a thematic resemblance to Twisted Metal before.) When Ralph Breaks the Internet slows down for a second, which is not often, it’s able to find its footing in the same mix of in-jokes and earnest heart that necessitated a sequel in the first place. As Ralph and Vanellope begin to grow apart, the typical Disney lesson gets a blunt modern twist: sometimes people just change, and it’s not your place to stop them.

Unfortunately, that’s just one part of the story, as the movie goes out of its way to separate the pair for much of its runtime. Vanellope befriends Shank (Gal Gadot), the protagonist of a hyper-violent, Borderlands-esque racing game titled Slaughter Race, and while there’s a fun visual contradiction established between the 4K gloss of Shank’s world and the bubbly Disney animation of Vanellope’s, the story never finds enough time to distinguish itself. Meanwhile, Ralph finds himself desperate to raise money for a broken arcade machine part (the Macguffin around which the story bends), and ends up aligning with Yesss (Taraji P. Henson), a viral video algorithm that turns video views into real-world money. Of all the running threads in this surprisingly busy sequel, Ralph going viral is by far the least effective; much like Vine fame, it’s good for a handful of laughs, but rarely leads to anything more sustainable.

The Verdict: There’s a thoughtful, kid-friendly parable about the hazards of internet fame somewhere in Ralph Breaks the Internet, but its aim is so scattershot that it only emerges in fits and starts. Where the first movie drew Pixar comparisons, both for its obvious debt to Toy Story and in its overall quality, Ralph Breaks the Internet feels a lot more like an Illumination feature, or perhaps something from Dreamworks at its peak. The pacing is manic, the gags come and go by the scene, and there are at least a handful of thunderous clunkers that bloat up the runtime. (A bit in the “dark web,” involving Alfred Molina as a virus, is Austin Powers-level bad in its grade school punnery.)

That underlying sweetness still exists, but this time it’s forced to share the stage with what increasingly feels like a family movie written by committee, a branding exercise with enough knowing winks to avoid being declared as such. It’s a bit like a Kingdom Hearts outing for audiences without the attention span for an RPG. It’s fun enough to hear the Imperial March usher a series of oblivious Stormtrooopers down a hallway with Ralph in hiding, or to enjoy the handful of pleasant cameos that roll through. It’s just hard to tell exactly what the point is after a while, at least beyond getting the kids in attendance to cheer and laugh with recognition.

Where’s It Playing?: Despite its premise, Ralph Breaks the Internet won’t be anywhere online (legally); see it in theaters on November 21st.