Along with her husband and writing partner, Willard Huyck, Katz also penned screenplays for American Graffiti and Howard the Duck 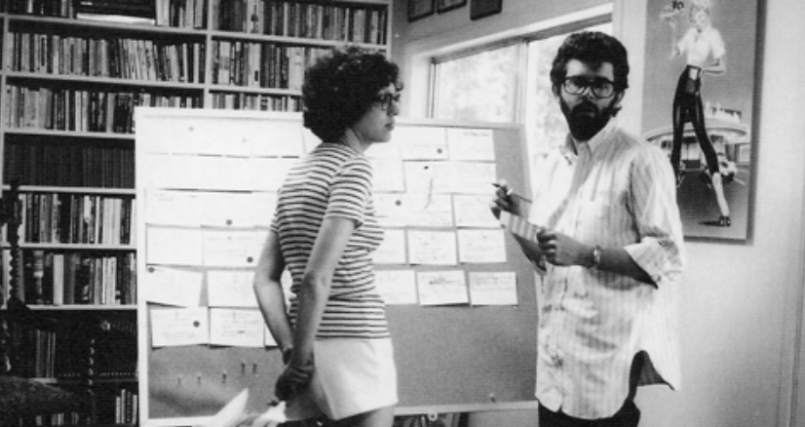 Gloria Katz with George Lucas, photo via The Mary Sue

Gloria Katz, an Oscar-nominated screenwriter and longtime collaborator of George Lucas, has died at the age of 76.

According to The Hollywood Reporter, Katz passed away Sunday in Los Angeles following a long battle with ovarian cancer.

Katz met Lucas through her husband and writing partner, Willard Huyck, in 1969. Lucas hired Katz and Huyck to write the screenplay for his 1973 film, American Graffiti, which earned the couple an Academy Award nomination.

Lucas again turned to Katz and Huyck to work as script doctors for what would become known as the first Star Wars film in 1977.

In a 2017 interview, Katz said Lucas had “a lot of reservations” about his script for Star Wars. “He said, ‘Polish it — write anything you want and then I’ll go over it and see what I need,'” she recalled. “George didn’t want anyone to know we worked on the script, so we were in a cone of silence.”

Katz said she and Huyck ended up writing about 30 percent of the film’s dialogue and also developed Carrie Fisher’s Princess Leia character to be a woman who “can take command; she doesn’t take any shit … instead of just [being] a beautiful woman that schlepped along to be saved,” she said. Katz and her hsuband also sought to bring some levity to the script.

In 1984, Katz and Huyck wrote the screenplay for Steven Spielberg’s second Indiana Jones film, Temple of Doom, which was produced by Lucas. Two years later, Huyck made his directorial debut with the cult comedy, Howard the Duck, using a script written by Katz. Lucas served as executive producer on the film.

Katz’s last writing credit came with the Lucas-produced 1994 adaptation of Radioland Murders. In her later years, Katz served on the board of the Writers Guild of America and as an advisor at the Academy Museum of Motion Pictures.