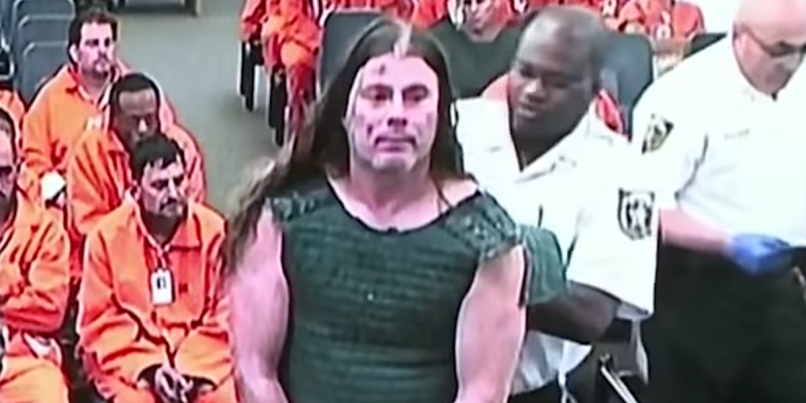 Earlier today, we reported that Cannibal Corpse guitarist Pat O’Brien was arrested for burglary and assault after allegedly entering a neighbor’s home without permission and shoving a woman to the floor, all while his own Northdale, Florida, home caught fire, complete with explosive ammunition inside.

If that wasn’t bizarre enough, new details have emerged this afternoon in a television report from local NBC news station WFLA. O’Brien was brought into a Hillsborough County court, where he appeared before the judge wearing shackles and an anti-suicide vest.

It was further reported that O’Brien charged at deputies with a knife when he was found hiding behind a fence, and had to be tased by officers in order to be detained.

The veteran death-metal guitarist is facing a $50,000 bond, having been charged with burglary and assault for the alleged break-in, in addition to assaulting officers. He also has to undergo a drug test before posting bail.

As previously reported, firefighters faced a tough battle putting out the blaze at O’Brien’s home, as it was filled with explosive ammunition.

Cannibal Corpse are slated to open for Slayer in spring 2019 on the next North American leg of the thrash metal legends’ farewell tour. It is unknown at this time how the alleged crime will affect O’Brien’s status with the band.