Slim Shady touches on a range of topics, from the Manchester bombing in 2011 to Justin Bieber's recent evolution 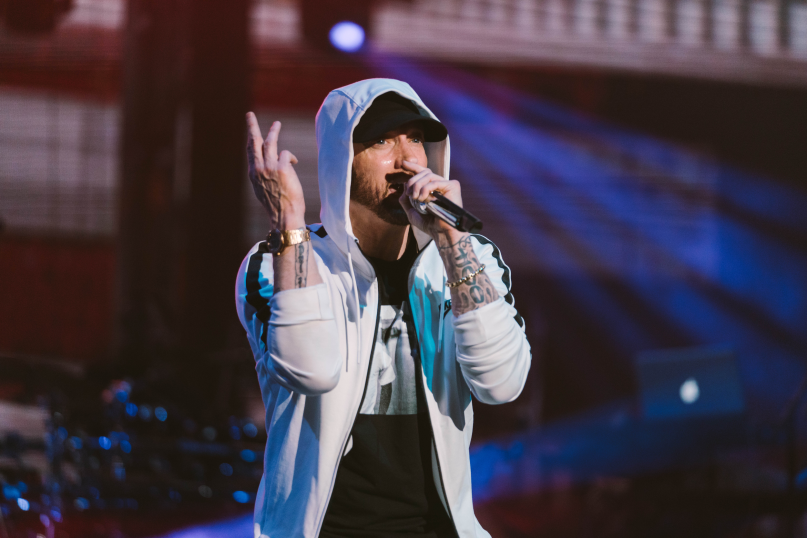 On the heels of his surprise LP Kamikaze, Eminem has just released a new freestyle track called “Kick Off”.

The monster track, which clocks in at 11 minutes, was recorded at the Shelter at St. Andrew’s in Detroit. Its  accompanying visuals sees Slim Shady in a dimly lit room surrounded by kegs, donned in a white hoodie, spitting bars at the camera. His references run the gamut, as he touches on everyone from to Dr. Dre and Snoop Dogg, to actress Reese Witherspoon, to Laci Peterson, who was killed by husband Scott Peterson in 2002.

One of the most notable stretches on “Kick Off” is Eminem’s discussion of the Manchester concert bombing of 2017, in which a man set off a bomb during an Ariana Grande performance, killing 22 people. “Seeing Ariana Grande sing her last song of the evening, and as the audience from the damn concert is leaving, detonates the device strapped to his abdominal region…” Em stops. “I’m not gonna finish that for obvious reasons.” Haunting stuff.

It’s not all doom and gloom, though; there’s plenty of great shade at folks like Justin Bieber, whom Em describes as a Catholic schoolboy turned drug dealer. It’s long, but it’s more than worth a look, the latest in a series of great filmed freestyles, including the one he did last year on Donald Trump. Perhaps he should stick to releases like this as opposed to weighty full-length albums which often lack focus and energy.

Watch “Kick Off” in full below.