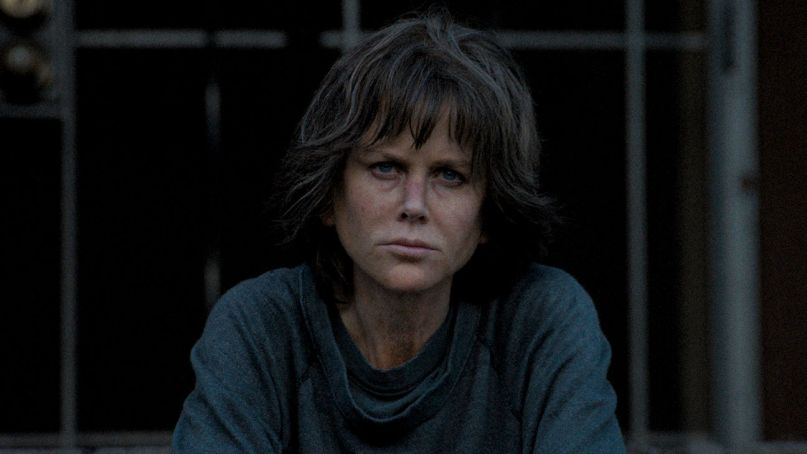 When world-weary and exhausted detective Erin Bell (a barely recognizable Nicole Kidman) quite literally stumbles into a murder scene, she’s told that it’s not her jurisdiction. She’s also somewhat condescendingly encouraged to get some rest. But she vows that she will get to the bottom of the crime. As we flash back between Bell’s days as a young, semi-idealistic cop on her first big undercover mission with her partner Chris (Sebastian Stan), winding through a nonlinear narrative reminiscent of ‘90s indie cinema, it quickly becomes clear why Bell is so invested in the case. Something went terribly wrong on that first mission years ago. This murder is connected to it. Now she’s on the hunt for revenge — or maybe absolution.

It’s a story that we’ve seen countless times before: a grizzled detective, physically and emotionally wrecked from too many years spent straddling the line between good and evil in an effort to uphold the former, is faced with a new, brutal case that drags them right back into the absolute depths of violence and moral ambiguity. Yet we’ve never seen it quite like Destroyer tells it.

The most obvious difference is, of course, the gender of this neo-noir’s protagonist. It’s rare that a woman is placed in the role of the genre’s archetypal anti-hero, and rarer still that it’s handled so smoothly, without any posturing about bad-assedness or hand-wringing about likability. Bell is every bit as flawed a human as her male counterparts, and the men in her life are for the most part accessories or catalysts for her journey. Even her choices as an admittedly lacking mother avoid any of the burdens and bullshit that are usually foisted upon female characters.

Destroyer is far more intriguing than a simple exercise in role reversal, though. Perhaps part of what makes it feel so fresh is also its almost uniformly talented cast and crew. Julie Kirkwood’s cinematography is bleakly stunning. Director Karyn Kusama (Girlfight, Jennifer’s Body) further cements her already formidable reputation as a gifted and groundbreaking filmmaker with this effort. Stan, Scoot McNairy (Bell’s long-suffering co-parent) and Shamier Anderson (Bell’s long-suffering partner) all bring a great deal of humanity to their relatively small supporting roles. Toby Kebbell and James Jordan bring appropriate menace to Destroyer’s seedy underbelly, and Tatiana Maslany as a woman running out of time and options is as magnetic as ever. Bradley Whitford has some fun nibbling on the scenery in his sole scene. And Kidman — a star who is already rightfully celebrated for her intense performances and chameleonic ability to inhabit almost any role — still manages to defy expectations here. The differences in her bearing as the broken current-day Bell and her younger, more optimistic self is so immediately clear that it renders the (somewhat gimmicky and distracting) makeup that she wears as the elder Bell almost redundant.

These elements don’t always blend together perfectly. The final scenes meander, which slightly dulls the film’s final gut punch. It’s likely that the big, climactic reveal won’t perfectly weather repeated viewings. Even though it never becomes more than the sum of its parts, though, those parts are more than significant on their own. It’s also quite possible that Destroyer will have a legacy that goes beyond its good quality as a film.

Between its structure, its worldview, and its anti-heroine, Destroyer is almost impossible to ignore. Love it or hate it, it will still leave an impression and it will undoubtedly inspire discussion. It has the potential to nudge the boundaries of what’s possible for complicated characters — particularly complicated female characters — in complicated stories just a little wider for the current crop of filmmakers, writers, and performers. It adds even more nuance and ambiguity to a genre that thrives on such things. It also has the potential to inspire the next wave of storytellers, opening their minds to the possibilities of filmmaking, paving the way for even more boundary-pushing, genre-redefining, complex storytelling in the future. Destroyer will end up on its fair share of top ten lists this year. But it will be even more interesting to see what top influences lists it starts surfacing on in the years to come.