Spider-Men, Women, Hams, and more aim to save the universe, and all the other ones too 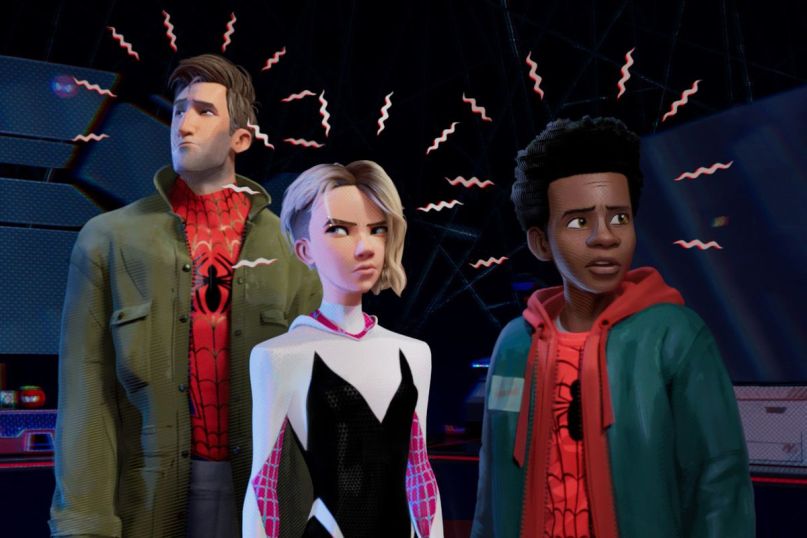 The Pitch: Alright, let’s do this one more time. Miles Morales (Shameik Moore), an everyday kid living in New York City, winds up crossing paths with a chemically engineered spider. The spider bites him. He begins to notice changes happening all over and inside his body. There’s talk of responsibility, of sacrifice, and of the perils of being a teenager. But in Miles’ world, he’s no Spider-Man yet. He’s just Miles Morales, dealing with his loving but embarrassing dad (Brian Tyree Henry) and middle school and now the webbing that won’t stop firing out of his hands. But there’s still a Kingpin (Liev Schreiber) in Miles’ world, and The Kingpin is now messing around with supercolliders for some reason. He opens a rift in the universe, which connects Miles not only to Peter Parker (Chris Pine), and to another Peter Parker (Jake Johnson), but to even more alternate Spider-Men in other interconnected worlds. Soon, Miles has to rely on five different Spider-Men/Women/Hams to help him save the world and fulfill his spider-inflicted destiny.

The Greatest Show On Every Earth: There is a lot going on in Spider-Man: Into the Spider-Verse, from the sonic to the visual to the comic to the emotional. By opening a space-time rift into the entire back catalog of Peter Parker’s daring adventures, Spider-Verse untethers itself from franchise responsibility and established canon alike in daring and exciting ways. What started as the latest effort to continue expanding Sony’s in-house Spider-brand, now that Tom Holland’s Spidey is part of the Marvel Cinematic Universe, turns out to be one of the most exciting onscreen Spider-Man stories yet. The film has as acute an understanding of what makes the character great as the best previous onscreen outings (Spider-Man 2, Spider-Man: Homecoming), but this time, it might just be the most ambitiously fun yet.

We’d be monsters to give away too much of the fun, but screenwriter Phil Lord takes off running with the infinite sandbox the film’s premise affords him. Soon, Miles winds up befriending Gwen Stacy (Hailee Steinfeld), from a universe where she becomes Spider-Woman; Spider-Man Noir (Nicolas Cage), an old-timey detective version from a black-and white universe; Peni Parker (Kimiko Glenn), an anime-illustrated offshoot who controls a robot that lives in symbiosis with her spider; and Spider-Ham (John Mulaney), a Looney Tunes version of the webslinger. Those aren’t nearly all, either, or the only riffs on familiar characters from the Spider-world. Part of the joy is knowing that, in Lord’s hands, you can just kick back and enjoy the fun.

All of the Lights: The real feast on display, though, is the sensory spectacle of Into the Spider-Verse as a whole. In the hands of directorial triumverate Bob Persichetti, Peter Ramsey, and Rodney Rothman, the endless possibilities of the known and unknown universe are used to full capacity. The cutting-edge animation fuses the sleek motion of CGI with the tactility of hand-drawn animation, peppering every frame of Miles’ own universe with dot-color linework that replicates the illusion of ink-illustrated pages in motion. Spider-Verse is consistently dazzling from frame to frame, and even when the animation is sometimes overwhelming (some of the most anarchic sequences verge precariously close to unfollowable to the eye at points), it’s trying things from scene to scene that most CG animation wouldn’t dare. This is far from the cash grab some audiences expected; this is a bold attempt to shove the artistic boundaries of a still-new medium forward. Whatever else you might think of Into the Spider-Verse, you’re a liar if you try to deny how entirely cool its entire look is, and how many things the movie is able to do with it throughout.

Also, keep your eye out for the point when this movie plays a similar game as Doctor Strange and arguably steals its thunder.

Miles and Miles: While it’s a feast for the eyes and ears, Spider-Verse also has more than plenty of the requisite heart that’s made Peter and his various iterations such a beloved fan favorite over the years. In Miles’ struggles to relate to his gruff dad, and in his sweet relationship with his charming ne’er-do-well uncle Aaron (Mahershala Ali), the movie finds its way to the heart of what’ll always make Peter or Miles or Gwen or the talking cartoon pig so charming. They’re still finding their way in life, and nothing about the newness of their powers changes the fact that being young is hard, and being young at that moment when you’re starting to understand the adult world is even harder still. The adults around you will let you down, life won’t always be easy, and the things you want will sometimes have to change.

There’s a real sense of weight to Miles finding himself that’s all the more miraculous when you consider how much is happening around it at any given time. Yet Spider-Verse finds time for all the things that make Spider-Man great, not just the most cinematic ones, and it’s all the greater for it. Miles is a different kind of hero, one who hasn’t lost those close to him, but who still has to discover who he is and what he stands for in a world that infrequently makes sense. It’s unlikely that this will be the end of Miles’ adventures, and we can’t wait for more.

The Verdict: At times, Into the Spider-Verse plays like a Who Framed Roger Rabbit? of the many NYCs that have graced comic pages since 1962, a daffy walk through decades of ridiculous characters and mythmaking that still contains enough gravity to make audiences take notice. But there’s a breathless sense of discovery and play that makes the film seem new, even as it’s tap-dancing through the imprints of so many sci-fi stories throughout the years. Simply put, superhero movies don’t often carry this sense of possibility anymore. Each is compelled to start franchises, to plant seeds for future spin-offs and sequels alike, to the point where its own story can sometimes feel incidental. In the Spider-Verse, there are no limits, and suddenly Spider-Man feels as fresh onscreen as Tobey Maguire’s first dizzying swing through NYC fourteen years ago.

It’s not as though Into the Spider-Verse is exempt from the aforementioned tasks, but it does what every franchise-starting movie should do: it’s a good enough movie on its own, as one installment, to justify more. It’ll leave you wanting more Spider-Beings in more offbeat worlds. It’ll leave you wondering when we’ll get to visit those, and what’ll become of Miles, and so much more still. For Miles, and for Spider-Man, anything can happen.

Where’s It Playing?: Into the Spider-Verse will swing into every possible screen it can be screened onto on December 14th.