Mac even came dressed up as the pizza delivery because, you know, he loves pizza 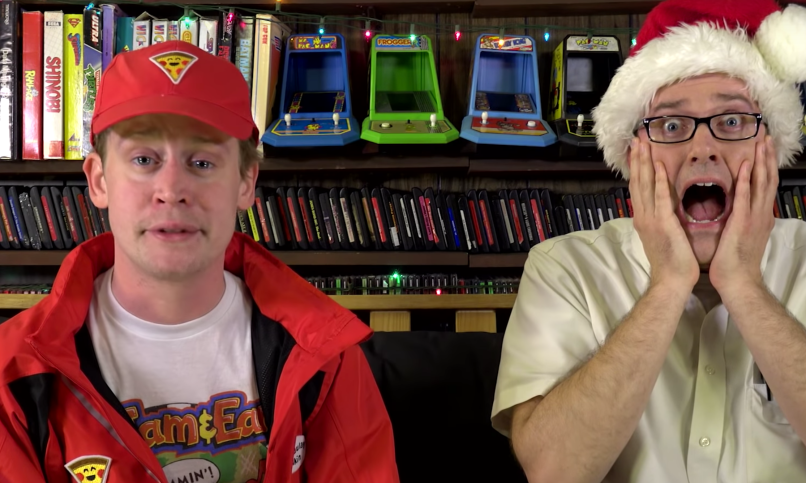 Macaulay Culkin already proved that he’s a pretty chill dude. He’s a guy who loves pizza, enjoys touring, and appreciates his past. So, we aren’t too surprised that he’d be down to play some old video games, even with someone deliberately unchill like the Angry Video Game Nerd.

In the latest episode of James Rolfe’s enduring online series, Culkin stops by to revisit the Home Alone games just in time for the holiday season. As Rolfe argues, he already reviewed the shitty games in a past episode, but to his surprise, that was only the first of the rubbish.

(Read: The 10 Most Timeless Children Films)

No, in the time that’s passed since the 1990 release of Chris Columbus’ holiday classic, there have been countless adaptations, ranging from Nintendo to Game Boy, Sega Genesis to, um, Playstation 2. It’s a whole Duncan’s Toy Chest-worth of games.

Even better, Culkin arrived in the same getup as the lanky pizza delivery boy from the first film, who was originally played by Dan Charles Zukowski. It’s a great homage to both the film and Culkin’s own Velvet Underground cover band, The Pizza Underground, which, naturally, leads to plenty of chatter about the art of the slice. Two words: “toilet pizza.”

(Read: The 25 Greatest Christmas Movies of All Time)

Look, we’ll agree that any game adaptation of Home Alone 2: Lost in New York is, as the French say, les incompetents. However, as both Culkin and Rolfe conclude, the original film’s 16-bit adaptation for the Sega Genesis is not too shabby, and even expands the lore of the Chicago suburbs by involving g-g-g-ghosts!

Agree or disagree with the video below, you filthy animal.