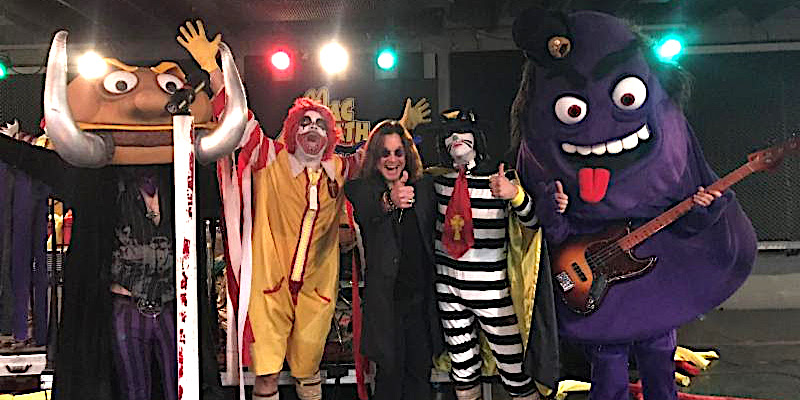 Ozzy Osbourne and his son Jack’s reality series Ozzy & Jack’s World Detour wrapped up its third season earlier this year, but one of the best moments never made it to air. In a previously unreleased clip unveiled today via Rolling Stone, Ozzy Osbourne meets Ronald Osbourne, the frontman of the McDonald’s-themed Black Sabbath tribute band Mac Sabbath.

Jack and his daughter Pearl set up the surprise for their paternal Prince of Darkness, who in the clip is led to a red-and-yellow curtain flanked by balloons depicting the fast food icon gone by way of Stephen King’s It. Ozzy is visibly confused, before the curtain falls to Mac Sabbath playing the signature riff of the Sabbath classic “Iron Man”.

“I am frying pan!” Ronald Osbourne screams out, and Ozzy visibly erupts in glee. He became increasingly impressed watching the lead singer grill a bat on stage in tribute to his mythology. Watch the video of the meeting below.

The moment was even bigger for Mac Sabbath than it was for Ozzy. As the singer put it to Rolling Stone: “Being Ronald Osbourne, the front-clown for Mac Sabbath, isn’t easy. I have to meet all these fry-by-night ‘Drive-through metal’ icons like Burger King Diamond, Cinnibon Jovi and KFCC DeVille, look them in the eye and pretend like my indigestion is not acting up. Today is quite different. Today I met Ozzy Freaking Osbourne. Some big clown shoes to fill.”

He went on to remark: “You might not believe this, but without Black Sabbath, Mac Sabbath would not exist.”

Mac Sabbath are set to play a December 28th show at the Fonda Theatre in Los Angeles, just a few nights before Ozzy headlines a New Year’s Eve edition of Ozzfest at The Forum in L.A. Check out Mac Sabbath’s video for the song “Sweet Beef” below.