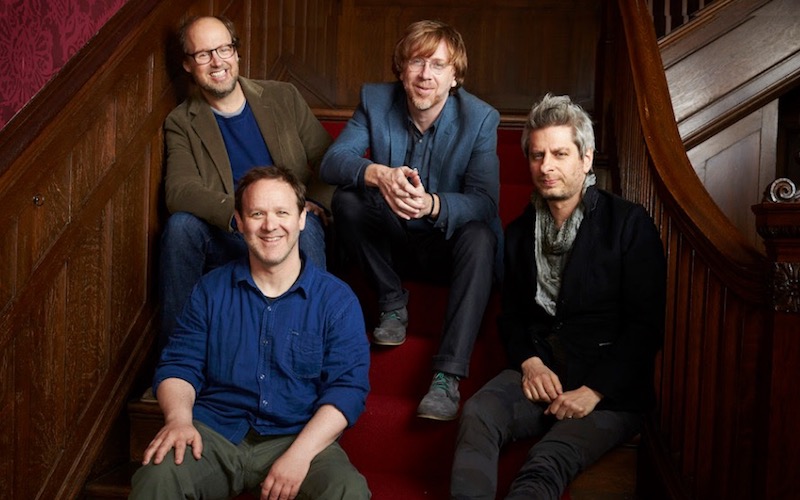 Each year, Phish put on a “gag” for fans during their New Year’s Eve show. The tradition dates back to 1992, when the group hoisted a crew member dressed in a chicken suit above the stage during a rendition of their song “Fly Famous Mockingbird”. In the years since, Phish have continued with their annual NYE stunt, progressively getting more elaborate with time and as their fan base and resources have grown. The group has flown through venues riding a massive hot dog, made it rain “cats and dogs” inside Madison Square Garden, and curated multiple Broadway-esque choreographed dances to ring in the new year. With the band returning to Madison Square Garden for four nights over the weekend, we’ve compiled a list of 10 of the wildest New Year’s Eve gags from over the years.

As one of Phish’s most iconic gags, the group celebrated the flip to 1995 while riding a giant hot dog through the eves of the former Boston Garden. While aboard the flying hot dog, the band performed “Auld Lang Syne” and threw a variety of props out into the crowd, including ping pong balls, feathers, and confetti. The giant hot dog now resides suspended in the lobby of the Rock & Roll Hall of Fame in Cleveland, though it has been revived for a handful of other performances, including New Year’s Eve in 1999 and 2010.

To ring in 2000, Phish hosted a weekend-long music festival at southern Florida’s Seminole Indian Reservation, which was attended by 85,000 fans — marking the largest concert celebrating the new millennium in the world. Ahead of the countdown, a man dressed as Father Time was stationed on stage, riding an exercise bike powering a giant clock. Exhausted, Father Time stopped pedaling 10 minutes before midnight, and the clock stopped; at this point, the band appeared at the back of the crowd, cruising through the audience on the giant hot dog from their 1994 New Year’s gag. Once on stage, the band fed Father Time hot dogs, which gave him the energy to keep pedaling and finish the countdown. The group ultimately continued on to perform a seven-and-a-half-hour set, spanning until the sun rose and making it the longest Phish set to date.

After going on hiatus in fall of 2000, Phish returned with a New Year’s Eve performance at Madison Square Garden. Early in the show, the band performed their song “Wilson”, with scenes from Cast Away projected behind them. As the song wound to an end, guitarist Trey Anastasio introduced Tom Hanks to sing the final lyrics of the song — in actuality, keyboardist Page McConnell’s brother, Steve, was tapped as a convincing Tom Hanks look-alike. For the countdown, the band debuted a new song, “Seven Below”, and created a winter wonderland within MSG, complete with fake snow and dancers dressed as snow angels on stilts and snow monsters who paraded across the stage and onto the floor.

Fresh off their second hiatus, Phish took over Miami’s American Airlines Arena for their 2009 New Year’s Eve run. At midnight on the 31st, a giant disco ball descended from the ceiling, and drummer Jon Fishman seemingly climbed inside. With the help of the crew, guitarist Trey Anastasio and bassist Mike Gordon loaded the disco ball into a giant cannon on stage. The cannon’s barrel pointed toward a giant net hanging from the ceiling, though once “fired,” the human cannonball appeared to blast through the roof of the arena; the gag was solidified by a crushed car cordoned off with police tape outside the venue that greeted fans following the show. Sans drummer, the band asked the audience if anyone knew how to play drums, and the group chose a planted audience member named Sarah. Though Sarah was replaced by Fishman — decked in a black wig and an outfit identical to Sarah’s — for the set, the actress reappeared for the band’s final bow instead of Phish’s actual drummer.

In 2010, Phish returned to Madison Square Garden to host a Broadway-style, multicultural New Year’s celebration evoking Disney’s “It’s a Small World”. For context, during Phish’s 2000 Japan tour, the band translated the chorus of one of their fan-favorite songs, “Meatstick”, into Japanese — lyrics which have since become a regular part of the band’s performances of the number. Following the Japanese lyrics of the song on New Year’s Eve, dozens of performers dressed in traditional garb came on stage to debut new translations of the song’s chorus, ranging from a Mexican mariachi band to Hasidic rabbis, yodeling Swedish snow bunnies, African tribesman, and more. The international dancers performed an extensively choreographed dance while the band departed the stage. Phish reappeared shortly after on the flying hot dog from past NYE performances, soaring through Madison Square Garden while tossing hot dogs into the crowd.

Using their song “Steam” as a theme, for New Year’s Eve 2011, the group rose to great heights, literally. Before midnight, a kettle placed on stage began to steam, foreshadowing the rest of the gag. With steam also starting to rise from the floor, some of the band’s instruments and lights slowly began to float off the stage. Shortly after, a woman planted in the audience rushed the stage and began to fly upwards, along with a security guard and one of the stage barricades. From there, other aerial dancers planted within the crowd rose into the air, along with the band’s guitarist and bassist, who were placed on platforms that rose from the stage floor.

In 2012, Phish hosted a “garden party” at Madison Square Garden, transforming the venue with artificial grass covering the floor and stage and the addition of actors around the venue, who sunbathed and played a variety of yard games throughout the performance. Keeping with the garden theme, the band opened with their debut cover of Ricky Nelson’s “Garden Party”. During the show’s first set break, golfers appeared on stage, using MSG as a personal driving range and launching golf balls into the crowd. Before the countdown, the band rode golf carts onto the stage and drove a few golf balls into the audience. For the lead-up to midnight, golf carts zipped across the stage while a dozen or so performers dressed as golfers joined the band, dancing and tossing golf balls into the crowd to ring in 2013. Phish finished out their set with golf-themed song selections, including “Sand”, “The Wedge”, “Lawn Boy”, “Wilson”, and Steve Miller Band’s “Fly Like an Eagle”.

To celebrate New Year’s Eve in 2015, Phish pulled off a visually stunning “disappearing act.” For the band’s third set, which led into the NYE countdown, the quartet started out on a small stage at the back of the floor of Madison Square Garden. Ahead of the countdown, a large hourglass-shaped canopy fell from the ceiling, completely hiding the band’s members. With psychedelic imagery projected on the hourglass and using pre-recorded audio, while fans were distracted by the second stage set-up, Phish stealthily made their way back to the main stage, just in time to play “Auld Lang Syne” at the stroke of midnight.

After debuting a new song, “Petrichor”, in the fall, the group used petrichor’s definition — the smell of rain after a dry spell — to inform their 2016 New Year’s Eve gag. With the band playing “Petrichor” ahead of the countdown, the group curated a Broadway-worthy performance to ring in the new year. During the song, a dozen performers appeared, offering up a choreographed dance with umbrellas while small beads fell from the ceiling, giving the appearance that it was raining indoors. For the traditional NYE balloon drop, thousands of inflatables shaped like cats and dogs fell from the ceiling while samples of animal noises were played over the group’s rendition of “Auld Lang Syne”, effectively making it “rain cats and dogs.”

During last year’s New Year’s Eve show, Phish transformed the stage of Madison Square Garden into a pirate ship. A giant sail was suspended over the stage, complete with aerial dancers hanging off the mast, and cannons flanking the stage were loaded with disco balls and “fired” into the crowd. To simulate the appearance of the ocean, each audience member was given a light-up wristband, which changed colors according to where their assigned seat in the venue was. With over 20,000 fans in attendance for the sold-out show, the visual effect of the glowing bracelets was breathtaking.