Holiday hilarity, an inappropriate joke swap, and a fight over Weezer win the night 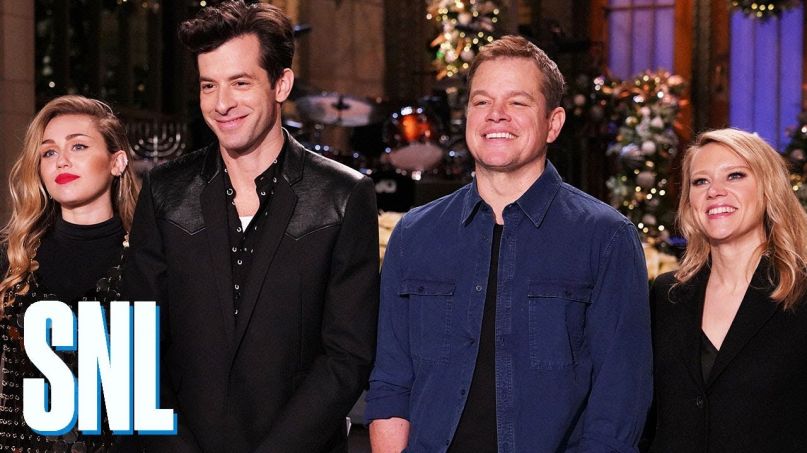 You could color me optimistic going into last night’s year-ending installment of Saturday Night Live. The previous two episodes had found a rhythm of sorts, balancing standout music with hosts willing to jump headfirst into the mayhem and a winning silliness in sketches that had been missing for most of Season 44. If ever there was a chance to end a bumpy 2018 on a funny note, Matt Damon as host would be a good bet. Not only has Damon proved to be one of his generation’s great dramatic actors, but he’s able to shift to comedy at the drop of a premise or punchline and has made a second career out of making comical cameos on late night. Who can forget “F*@#ing Matt Damon”?

Add the chance to see Miley Cyrus return on vocals for Mark Ronson, and it makes for an episode with a unique musical pairing and a host whose apples we almost always like. So, how’d it all turn out? Read on below to check out the definitive can’t-miss moments. Have a wonderful Christmas, everyone, and here’s hoping you get better than Theresa May under your Brexit tree. Oh, and to Tobin, Squee, and Needle-Dick Ned, be sure to use a designated driver. We’d hate you to black out behind the wheel and end up tilting the Court even more.

Home for the Holidays Wins

Some of the very best skits of the season have been holiday sketches and videos from the last few weeks. Last night, the show scored the most laughs when tapping into our collective holiday experiences. The episode’s very best moment came when Damon and Cecily Strong shared a romantic cuddle over wine and reflected on the “Best Christmas Ever,” a revisionist history that left out the ungodly hours, flatulent in-laws, binge drinking for sanity, and the one cousin who insists on wearing a MAGA hat to the dinner table. Other premises that hit home were the branches of misfit ornaments that have fallen out of favor and, to a lesser extent, Damon and Strong once again showing off their chemistry as the main act at a Christmas sing-along show that’ll make you wish you had stayed home.

Miley Cyrus needs no introduction. Mark Ronson shouldn’t, given that he’s the producer responsible for every pop hit of the past two decades (barely an exaggeration). So, it’s been a change to see Ronson recently thrust into the spotlight and guesting on late-night television. Cyrus made for the perfect partner — not to mention, setting show records for amount of side-boob — bringing presence and flavor to their joint hit, “Nothing Breaks Like a Heart”, as Ronson coolly played acoustic guitar alongside her. Their version of “Happy Xmas (War Is Over)”, which featured special guest Sean Ono Lennon, dragged a bit due to Cyrus’ drawl, but she more than made up for it by reaching for something extra during the song’s emphatic final stretch.

Hark the Herald Angel Takes the Kids to Her Sister’s

Dear, Lorne Michaels. Please give us all a huge present in the new year by letting Heidi Gardner on the air more, especially during Weekend Update. Whether it be as Goop girl Baskin Johns, teen YouTube movie critic Bailey Gismert, or Angel, “Every Boxer’s Girlfriend from Every Movie About Boxing Ever,” Gardner nails the performance. Finally getting to meet her boxer husband, Tommy Ray Donovan (a Southie-talking Damon), and father to her children — Mikey, Nicky, Peppers, Keno, and the gestating Gronk — only makes us more curious about Gardner’s hilarious stable of one-note characters. If we don’t see more of Gardner in 2019, you’ll know where to find us on Saturday nights: taking our kids to our sister’s.

We avoid certain topics around the family dinner table during the holidays for good reason. And as a useful warm-up for the real thing in little over a week, SNL reminded us precisely why we don’t bring up politics, religion, or any Weezer album after Pinkerton. While it’s been a debate in online forums and around the CoS water cooler for decades, to see Matt “Beverly Hills” Damon and Leslie “I Understand Rivers Better Than He Understand Himself” Jones go 12 rounds while their friends can’t bring themselves to give two shits, well, it just felt like a special holiday nod to anyone who is likely reading this review. Hip hip. Hip hip.

Balls Are Meant to Be Broken

Wherever you fall on the issue of the Kevin Hart Oscars debacle, you have to admit that it’s strange to see something you said or wrote in an off-the-cuff moment — no matter how unacceptable it may have been — come back to haunt you a decade later. There’s definitely a harmony to be struck between social progress and telling jokes in the social media era, and last night’s episode addressed that issue. Whether it was the humorous string of celebrities hoping their pasts were clean enough to audition for Oscars host, Colin Jost and Michael Che intentionally writing inappropriate jokes for the other to read, or the boys breaking balls down at Frankie’s Ale House, we’re reminded that there are absolutely times when we need to speak up when we see something wrong, and other times we just need to turn off the damn Twitter and have a laugh.