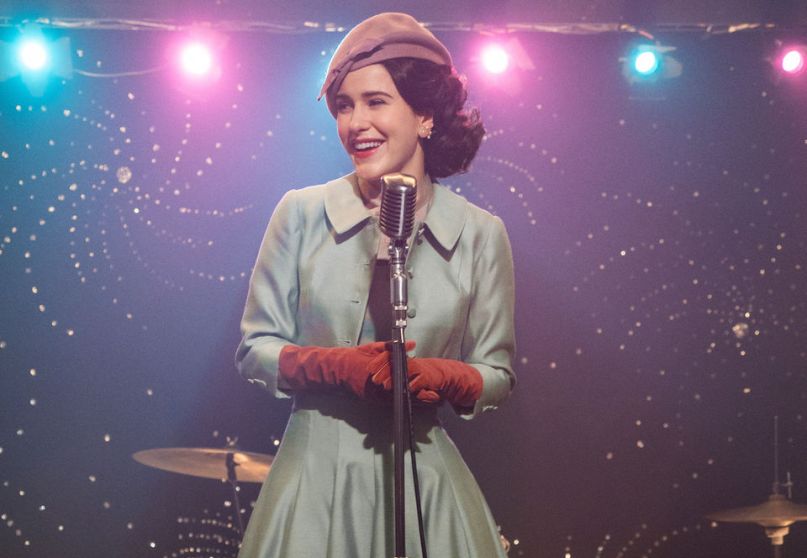 The Pitch: The first scene of The Marvelous Mrs. Maisel Season 2 showcases creator-writer-director Amy Sherman-Palladino’s talent at taking the everyday and turning it into something resembling the opening number of a Broadway play. In this case, Midge (Rachel Brosnahan), impeccably dressed in a belted burgundy dress, is in the basement of department store B. Altman taking calls (and answering other operators’ calls while rubbing them on the back as they hyperventilate from the stress of it all). She’s obviously entirely overqualified for the job, but she’s also charming and never bitter about it. It’s almost as if there’s a metaphor about women’s expected place in society there.

But Mrs. Maisel is a show about one woman pushing her pretty skirts up against those societal barriers, and Season 2 finds Midge on the slow-but-steady rise of an emerging artist. Manager Susie Myerson (Alex Borstein) returns, hoping to build the publicity from the Lenny Bruce appearance into future gigs. Separated hubby Joel (Michael Zegen) appears on the sidelines and, surprisingly, offers tiny nuggets of encouragement. And as newspaper articles and unauthorized recordings pop up, Midge finds it harder and harder to hide her other life from family and friends. Sometimes she’s her own worst enemy (it’s hard to go from dropping F-bombs at night to polite conversation during the day). But Maisel is a comedy with legs, and there’s more “there“ there than Sherman-Palladino’s signature witty lady talking herself in circles around dumbfounded do-gooders. Here are my biggest questions after the first five episodes of the new season.

Wait, are Miriam and Joel a retrofitted Lorelai and Christopher (Gilmore Girls)?

Is Miriam suffering from the Lorelai Curse, where there are plenty of fish in the sea, but it’s never the right time?

Season 1 ended with Joel floundering in self-pity. It can’t be fun to walk in on your estranged wife performing a stand-up routine that more or less centers on how sad and pathetic you are. To make matters worse, before this embarrassment, Joel was flirting with the idea of reuniting with Midge. She cooks, she cleans, she schedules his day, hell, she made it possible for him to never grow up — what’s there not to like?

But it’s Midge in the Season 2 premiere that begins second-guessing herself. In her defense, an unexpected detour takes her to Paris, and, gosh, everything seems more possible in Paris. But a conversation at the end of the first episode reminded me of the couple at the heart of Sherman-Palladino’s last big hit, Gilmore Girls. Remember in Season 2 of Gilmore Girls when it looked like Rory’s never-quite-the-right-time parents, Lorelai and Christopher, might finally be making it work, but then Christopher discovers his girlfriend Sherry is pregnant? But — but it can still work, right? Lorelai shuts that idea down quick: “Are you still with Sherry? Is she still pregnant. Then it is what it is, baby.”

A similar conversation happens this season on Maisel, but the baby is Midge’s comedy career. In Joel’s first redeeming moment of the season, he tells Midge he doesn’t want her to give it up, but he’s also self-aware enough to realize he’ll be crushed if he’s by her side while she does it (hey, we don’t have a high bar for being impressed with Joel). It is what it is, baby.

It’s too early to know if this relationship will keep boomeranging like Lorelai and Christopher’s did, but clearly the dynamic of choosing self or partner continues to be a crucial theme of the series. That confusing pain of having someone you’re so comfortable with, but knowing deep down they’ll probably never quite be the one, makes for a lot of heartache … but good TV.

Is the road taken really that bad?

The astute viewer may notice another parallel to Gilmore Girls. Sherman-Palladino loves doing these parallel plots where daughter and mother deal with the same sort of thing in their own individual story line. This season it’s Midge and her mother, Rose (Marin Hinkle), who have stumbled upon those two roads diverging in the woods. What’s a lady to do — follow her husband or follow her passions?

Rose’s storyline takes up the first few episodes of Season 2 and ultimately finds her in a life drawing class at Columbia, something of a compromise with lovable-but-emotionally-stunted husband Abe (Tony Shalhoub). And y’know that life doesn’t seem so bad. She’s meeting bright women from the art and art history departments that are half her age, she’s getting a chance at creative expression (when not fainting at the sight of nude men), and she’s creating a world of her own. As Midge’s comedy career threatens to ruin several relationships and ruin her own reputation, the series takes an effort to show just how a woman might get by without, say, making fun of the size of a male comic’s dick on stage … although, personally, we hope Midge sticks to the latter.

Midge, girl, what’s the obsession with the damn Revlon counter?

Believe it or not, this is the most interesting of the three questions to me. You see, in that same opening scene we started with, where Midge is answering four phone lines at one time in the B. Altman operator room, she waxes nostalgic with her coworkers about her time on The Floor. If you’re on The Floor (think behind the makeup counter, selling jewelry, or even a lowly coat taker), you’ve apparently made it in 1959. Midge’s goal this season, if one were to watch the trailer, is launching a comedy career. But if you watch the actual show, the woman’s goal is really to prevent that middle-aged woman in the oversized hat from buying the wrong shade of lipstick. Midway through the season, Midge and fam head off to the Catskills for the summer because they’re rich, and rich people apparently take off the whole summer. It’s obvious from the moment Midge leaves the city, with Susie practically at her leg begging her to stay (the lost opportunities! their momentum!), that she’ll be back. But it’s not comedy that brings Midge back. It’s a last-minute appointment to the Revlon counter. What is our feminist heroine doing?!

It’s an interesting study into character (and time and place) because even as a woman is doing something, well, marvelous, like making a name for herself in a male-dominated field, the woos of society’s definition of success and refinement are irresistible. And hell, let’s get it straight: It’s fine to love makeup and want to be the Revlon girl. What’s upsetting is Midge will drop anything for what she sees as an attainable goal (Revlon girl) while remaining noncommittal about dreams outside what is normative for a woman (a comedy career). Maybe that’s why Maisel is both unabashedly fun and somehow fundamentally dark. Everyone on the show can see she’s marvelous except Midge herself — because, like many women, she was never taught to expect to be.

Verdict: Some have speculated Mrs. Maisel Season 1 rose to such acclaim in part because Sherman-Palladino’s Gilmore Girls was never adequately recognized back in its day. That may be partially true. But in Season 2, Brosnahan truly finds her rhythm as Mrs. Maisel, and this has become a show that’s both fun and funny (filled with a larger-than-life expanded cast including Kevin Pollak, Luke Kirby, and Jane Lynch), but also is grappling with big issues without ever getting overtly political.

Maybe the most blaring misstep of the first season was when Midge finds herself at a suffrage protest in the park and quickly appropriates the cause without really understanding it. Sherman-Palladino’s strength isn’t in tackling specific issues — it’s in playing with dynamics: between women of different generations with similar desires but a different set of limitations, between rich and poor and how social class affects how seriously one may take a side hustle, and the dynamic between highbrow and lowbrow humor and presentation (and the difficulty that arises when one tries to float between those two worlds). In exploring those timeless struggles, it’s safe to say: sophomore slump be damned. Mrs. Maisel is indeed marvelous.

Previous Story
Don’t Look Back: Seeing the Real Bob Dylan at Last?
Next Story
Hootie and the Blowfish perform “Only Wanna Be With You” on Fallon: Watch
Popular
More Stories
[fu-upload-form form_layout="media" title="Submit Your Photo"][input type="hidden" name="ugc" value="1"][/fu-upload-form]