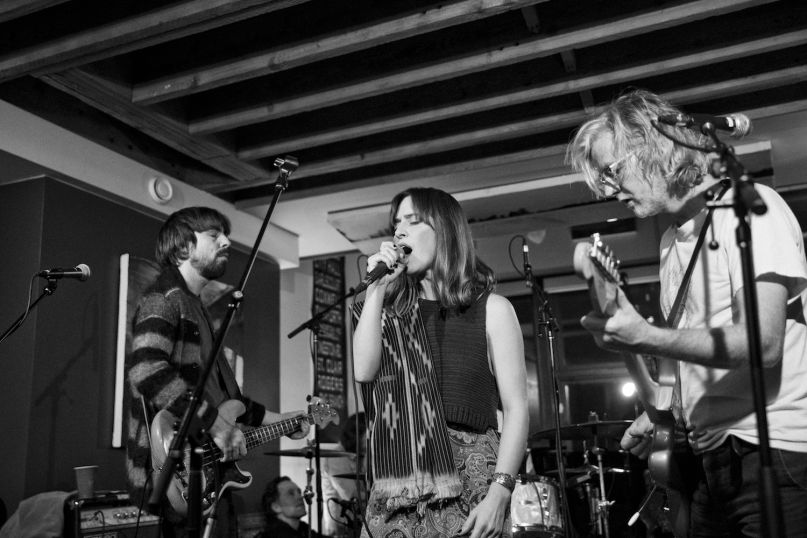 Broken Social Scene and Feist on The Strombo Show, photo by Vanessa Heins

It’s been almost two years since Hug of Thunder, the last full-length from Broken Social Scene. However, it appears a follow-up may be here sooner than later, as the Canadian indie rock greats just debuted very promising new music during an exclusive set on The Strombo Show.

The band’s 45-minute performance from House of Strombo featured the premiere of two new songs, “Can’t Find My Heart” and “1972”. The first offering kicks off with driving, ominous guitars before launching into a lovelorn tune led by Kevin Drew. “If you’re feeling the something, and you’re feeling the night/ If you’re feeling the crush, can I take you home?” he can be heard pleading.

Meanwhile, the second number was more mellowed out and somber with its brass accompaniment. “We’re dying, we’re dying,” at one point mourns Ariel Engle, one of the newest members of BSS.

Elsewhere in the set, BSS were joined by member Feist during a performance of “Lover’s Spit”, from their 2002 album, You Forgot It In People. The band also covered “I’ll Bring the Sun” by fellow member Jason Collett, “TBT” by Engle’s solo project La Force, and the Bonnie Tyler classic “Total Eclipse of the Heart”.

Additionally, BSS peppered in a couple of more original songs from the past, includingYou Forgot It In People cut “Cause = Time” and “Ibi Dreams of Pavement”, taken from their 2005 self-titled record.

Watch the entire set below, with the new material coming in around the 7:41 mark.