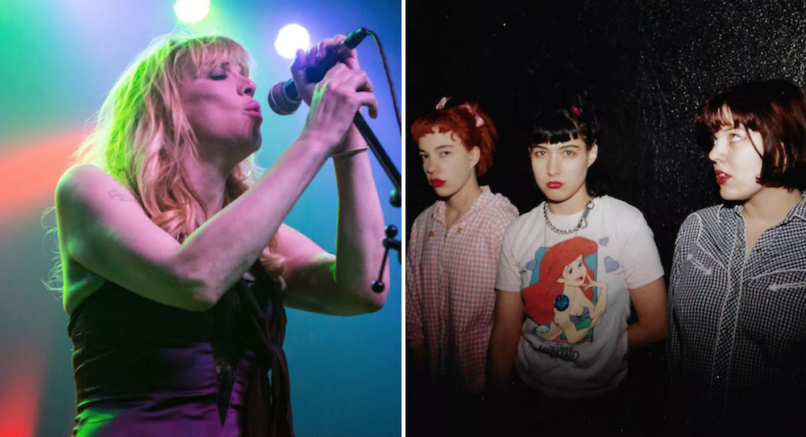 Anyone with a Sleater-Kinney shirt or a Le Tigre record was thrilled when news broke that original riot grrrls Bikini Kill would be reuniting for a select run of shows. Don’t count Hole singer Courtney Love in those ranks, however, as instead of celebrating the iconic band’s return, she’s used the reunion to reignite a nearly two-and-a-half-decades old feud.

The story goes that Love didn’t get along with Bikini Kill during the 1995 Lollapalooza tour. Depending on the source’s memory, Love either punched, attempted to slap, or threw candy at Bikini Kill singer Kathleen Hanna. There’s also the Hole track “Rock Star”, with lines like, “Well I went to school in Olympia/ Everyone’s the same/ And so are you, in Olympia”, often read as shots towards Hanna.

So maybe it’s not surprising that when Love stumbled upon an Instagram post from Bust Magazine championing more reunion shows, she took aim and fired again. “Speak for yourself,” she replied to the post. “Biggest hoax in history of rock and roll.”

(Read: Kathi Wilcox: From Bikini Kill to The Julie Ruin)

When other users started coming at her for being unnecessarily bellicose, she retorted by calling drummer Tobi Vail and bassist Kathi Wilcox hacks and Hanna a “diy nonsense dilettante:”

“Yeah. It’s worse when I speak truth to the rock male industrial complex. But at Least I have the best view. Two of that band total amateurs. Hanna is a good hype man. But her persona is such a diy nonsense dilettante. A big idea they cannot convey, because they suck. That’s all! Back to Paris couture, because frocks don’t trigger me. Ce vai!”

She did find some support, however. User @scottharn called “Riot grrrl a failed experiment that died the second they decided shunning their own exposure was the ‘anti-establishment’ way.” Love responded, “Exactly! Now back to Paris, the couture, and chanting.”

Those on Love’s side might have a reunion of their own to look forward to, as she responded to someone begging for the return of Hole by saying, “working on it.” Of course, we’ve heard that before, and she followed it up with another quip about Bikini Kill fans. Gotta love the Love.