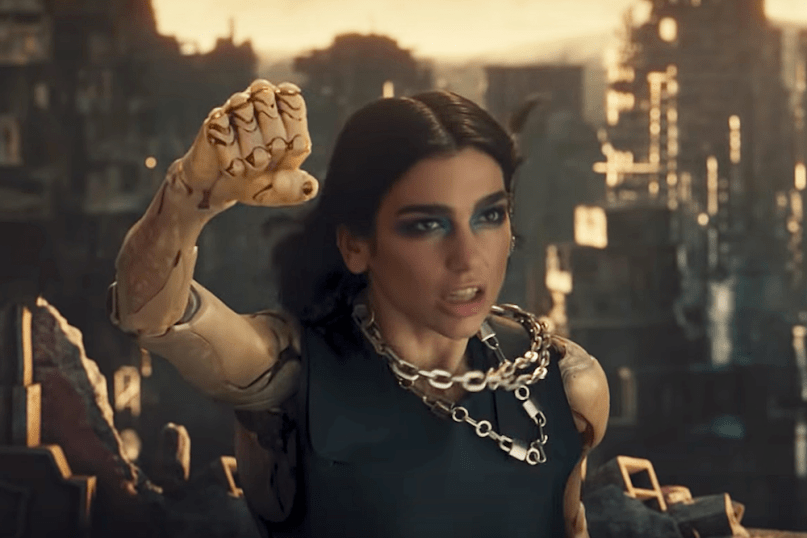 Dua Lipa has one major priority for 2019, and that’s to release a new album. While we patiently await what we hope is an “irresistible” collection of pop songs, the Londoner has gifted us a new single called “Swan Song”.

Today’s single comes with a music video set in a dystopian world inspired by Alita. Lipa stars in it and whips out more than a handful of strong poses and choreographed moves, for which she trained extensively judging by some behind-the-scenes footage.

In a statement, director Floria Sigismondi talked about the connection between the film and music video:

“While in the film Alita is quite literally on a journey to discover who she is, her story serves as a really powerful allegory for any girl who doesn’t yet know her own power. “I wanted to play with that same profound notion by dropping Dua into a facet of Alita’s world and allowing Alita to serve as a surrogate that leads her on a journey to discover she’s stronger than she ever could have imagined.”

2HRS AND 30 MINS UNTIL SWAN SONG IS YOURS!I’m so excited for you all to hear the song & see the video. Here are some very early shots of me training for the video in Toronto while I was out there writing songs.I spent a couple hours practicing every night⚔️???? @AlitaMovie #DuAlita pic.twitter.com/gFHSm1U6ne

Alita: Battle Angel opens on February 14th. Lipa’s first and only album came out in 2017. Last year, she knocked out a pair of hits with the help of Calvin Harris (“One Kiss”) and Mark Ronson, Diplo, and Silk City (“Electricity”).