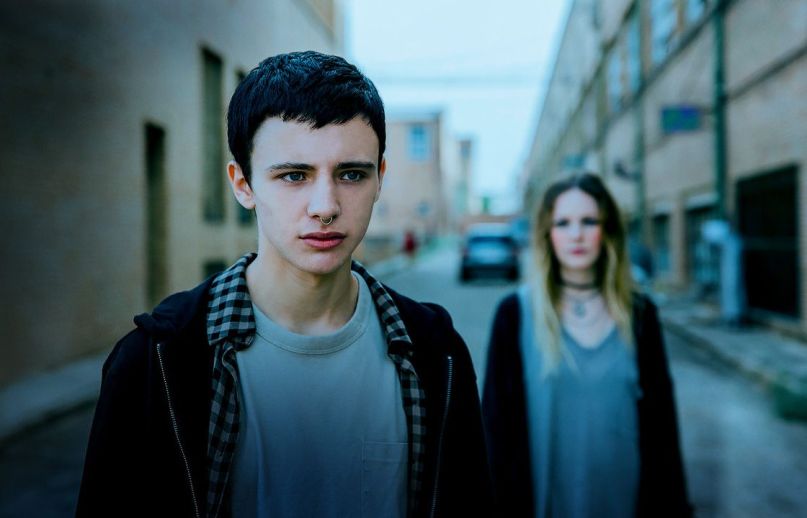 The Pitch: Ánimas, a Netflix original horror flick from Spain, is a surprisingly heady, richly atmospheric story of two friends, Abraham (Iván Pellicer) and Álex (Clare Durant), and the rift that comes with the arrival of Anchi (Chacha Huang), Abraham’s new girlfriend. Well, sort of. Consider Anchi’s presence the inciting incident of a sprawling, nightmarish narrative that encompasses mental illness, child abuse, and toxic friendships. Written and directed by Laura Alvea and Jose F. Ortuño, the movie unfolds in foggy, abstract fragments that spin scraps of story into eerie spells of exploration and mounting tension. What, exactly, is the true nature of Abraham and Álex’s relationship? What’s prompting Álex’s repeated bouts of self-harm? Why won’t the lights stop flickering?

Flickering Inspiration: Seriously, the lights almost never stop flickering. But that’s not enough to distract from the lush putridness of Alvea and Ortuño’s vision, which paints Abraham and Álex’s aging apartment complex, where much of the action takes place, in harsh reds and queasy greens and yellows. The rest of their world isn’t that much different; Abraham and Álex’s orbit is a step left of reality as we know it, with its aesthetic mirroring the characters’ emotions and its denizens remaining obscure and unknowable. And the ones we do spend time with — Abraham’s abusive father, for example — are rendered beastly and inhuman. Sometimes, his mere presence prompts a sickening wash of crimson light.

Most of the time, however, you wouldn’t think anyone else exists outside of their bubble, and it’s that sense of intense isolation that helps conjure much of the film’s lonely horror, which tends to emerge from the threat of self-harm and the shadows of empty rooms. Alvea and Ortuño demonstrate a remarkable patience, balancing the peripatetic nature of their storytelling with long, clinical pans that rely on a location’s myriad textures as threats in themselves. Mirrors, lights, curtains, and corners tease the eyes during these sequences, each emerging as a viable threat in the escalating tension.

That said, the pair do overreach and, as such, Ánimas occasionally evokes the Insidious franchise in just how stuffy and overly refined the aesthetic becomes. Some of the nightmare images that flood the film’s second half — standalone doors, sudden pools of blood — lack imagination, resonating as vestiges of horror’s dog-eared playbook. It doesn’t help, either, that the cinematography comes with a digital polish that serves to soften some of the film’s tougher, pulpier edges. Horror’s often best when it feels a little dirty.

What a Twist!: All the visual finery serves, in many respects, to deepen and provide gravitas to the film’s thin story, which rests on a twist that clever viewers will likely catch pretty early. Ánimas doesn’t live and die on that twist, thank goodness, and gleaning it in the early going might even go far in interpreting the movie’s myriad head trips. But if you don’t, Alvea and Ortuño backload the film with a prolonged and unnecessarily academic deep dive into its psychological implications. This heavy hand serves as both a narrative distraction and a tension killer, and one wishes the filmmakers trusted their audience just a bit more. The third act, which is rich in thematic resonance, might have landed a bit more powerfully.

Is It Scary?: Quite often, especially in its early going. Alvea and Ortuño sidestep the easy route of continuous jump scares, favoring uncertainty, disorientation, and a pervasive sense of haunting as their preferred spook modes. While the duo possess a keen sense of patience, the storytelling itself jaggedly leaps between perspectives, settings, and realities in ways that, while often exhausting, are justified by the fractured nature of the narrative. Ánimas moves at a breathless pace, making its moments of careful escalation that much more impactful.

The Verdict: Ánimas packs a lot into its 90 minutes, and occasionally suffers for it. There’s a dourness to the movie, a self-seriousness that won’t make it anyone’s favorite escapist flick. But while it wears its themes on its sleeve, they remain undoubtedly striking and thought-provoking, especially in an age where the issue of mental illness is being discussed on a global scale. Durant and Pellicer deliver strong, vulnerable performances, though due to the nature of the narrative, it’s hard to feel as if you truly understand them. In the end, it’s Alvea and Ortuño that emerge as Ánimas’ stars. Every frame emerges as composed, and their capacity for delivering well-earned scares is finely tuned. It’s a shame, then, that the movie feels dropped into a sea of Netflix titles with little effort on the part of the streaming service to make it stand out. For its flaws, it certainly deserves to be seen.