Film Review: Fyre Insightfully Rakes Through the Ashes of the Failed Festival 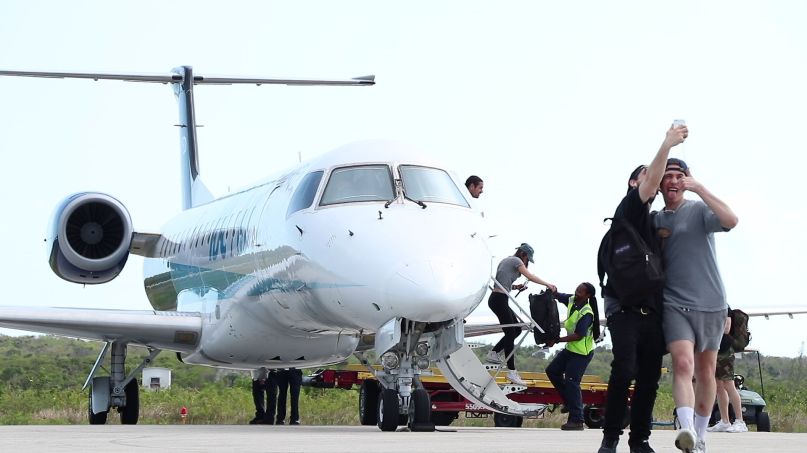 The Pitch: In April 2017, New York tech entrepreneur Billy McFarland (along with his partner, Ja Rule) conceived of the perfect way to launch their new talent booking app, Fyre: host an extravagant, high-end music festival in the Bahamas and invite social media influencers and well-off attendees to enjoy the high-profile acts, luxury villas, and gourmet meals that awaited them. What Fyre Fest attendees found, to the delight of social media, were soaked hurricane tents, pre-packaged sandwiches, no booked acts, and (for many) no way off the island. For Fyre, documentarian Chris Smith (American Movie) details the story of the Fyre Festival from its exciting inception to its disastrous end, all the while peeking into McFarland’s life story and the social media-fueled hype that made the debacle possible in the first place.

A Culture Under the Influence: “How could something like this happen?”, asked everyone with an Instagram account and a sense of schadenfreude when they first started seeing desperate tweets from the much-hyped Fyre Festival by hip, snooty influencers about its disappointing cheese sandwiches and overcrowded airports. While it’s tempting to just scoff at rich millennials with too much money getting their due, Fyre is more perceptive; it’s a thoughtful, probing investigation into the psychology and perspective of everyone involved in the festival, from its delusional creators to its manipulated organizers.

Surely, there could be no greater match of filmmaker and material than Chris Smith and McFarland; in many ways, McFarland feels like the natural extension of Mark Borchardt, Smith’s subject in his seminal work American Movie – both idealistic but deeply troubled figures whose charisma convinces otherwise-sensible people into helping them try to achieve the impossible. Unlike Borchardt, however, McFarland is blessed with venture capitalist money and the kind of overconfidence that can only come from fake-it-till-you-make-it white men. His employees describe him as a snake charmer who can get things done through sheer force of will, cultivating a brand around himself as a successful entrepreneur through hustle alone.

The first half of Fyre plays out like a Greek tragedy, focusing on McFarland as a kind of Oedipus figure, blinded to the oncoming storm that awaits him. He’s a slick, backwards-hat type who grins and smooth-talks his way into New York’s innermost social circles. Friends and colleagues describe him as someone who started driving Maseratis just to cultivate an image of success – the success, he assumed, would come later. Whether he’s just a sociopath, or just a man who likes to live his life on credit, is a complex question that Smith doesn’t pretend to answer. He just shows you the footage, and the responses from the people McFarland bilked, and asks you to fill in the blanks.

Things Get In Tents: Of course, every good slow-moving disaster has its moment of impact, and Fyre delights in showing its audience the unfolding of the Fyre Festival after an hour of detailing every single problem leading up to it. Within hours, the Fyre Festival becomes a millennial Thunderdome, which Fyre illustrates through footage of beleaguered millennials traipsing through the pitch-black night to hoard mattresses and toilet paper, their misadventures lit only by the flashlights beaming from their selfie sticks. It’s a deliciously cruel joke, and Smith allows us to delight at least a little bit at these conned kids’ misfortune.

But the focus always turns back to the whys and hows of such a disastrous festival, which is where Fyre’s emphasis on company personnel and confused consultants works its magic. The interviews with former Fyre employees form the backbone of the doc’s structure, as Smith charts the trajectory of the Fyre Festival from inception to conclusion. Even in its first stages, cracks start to form in McFarland’s grand scheme: the shoot for the original Fyre promotional video is a disaster, with Ja Rule haranguing supermodels into jumping into the pool with him and their pilot being a Fyre logistics consultant who trained himself with Microsoft Flight Simulator.

As the months go by, and the venue’s lack of infrastructure causes more and more problems, the employees speak with a kind of haunted hindsight, an admission that they knew what was wrong in the first place but were forced into compliance by a belief in McFarland’s dream (or, in some cases, the withholding of their paychecks until the festival’s opening). One post-fest conference call hammers home the divide between the frustrated, unpaid employees and their denial-stricken employers, as Ja Rule brushes off accusations of fraud: “it’s not fraud, it’s not fraud. Call it ‘false advertising’”.

It’s not hard to root for these poor saps, saddled with the legacy of a sunken ship they struggled so hard to right before it was too late. In many instances, these lower-level employees are still on the hook for hundreds of thousands of dollars, even if it was all Billy McFarland’s fault. Smith even reminds us of the local Bahamian workers who were left in the lurch, including one pitiable restaurant owner who had to empty her life savings just to pay her workers. Try as we might to have a good laugh at millennials’ expense, Fyre reminds us that the human cost of the organizers’ fraud was and remains quite real.

The Verdict: If the Fyre Festival was a train wreck in slow motion, Fyre is the instant replay of said train wreck, complete with annotations and color commentary. It’s a gripping, fascinating watch, an elegantly assembled portrait of the end result of influencer culture and late-stage capitalism – the blind leading the blind into an empty, insubstantial image of success and luxury that turns out to be nothing but smoke. It would have been easy for Smith to focus his camera on the gormless influencers who had their vacation ruined for our pleasure on Twitter — some, like Hulu’s competing Fyre Fraud documentary, accuse Smith’s work of going soft on Jerry Media, the Fyre-affiliated marketing company who admittedly helped produce the film). But Smith’s focus is wider than that, turning his eye to guys like McFarland and the horrifying new trend of pie-in-the-sky tech bro they represent: what happens when you fake it till you make it, but the making it never comes?

Where’s It Playing? Fyre is ready to sell you the experience of a lifetime starting Friday, January 18th on Netflix.

Editor’s Note: Fyre is the second of two Fyre Fest documentaries to premiere this week. The competing Fyre Fraud is streaming now on Hulu.