Film Review: Netflix’s IO Approaches the End Times With a Lack of Intrigue 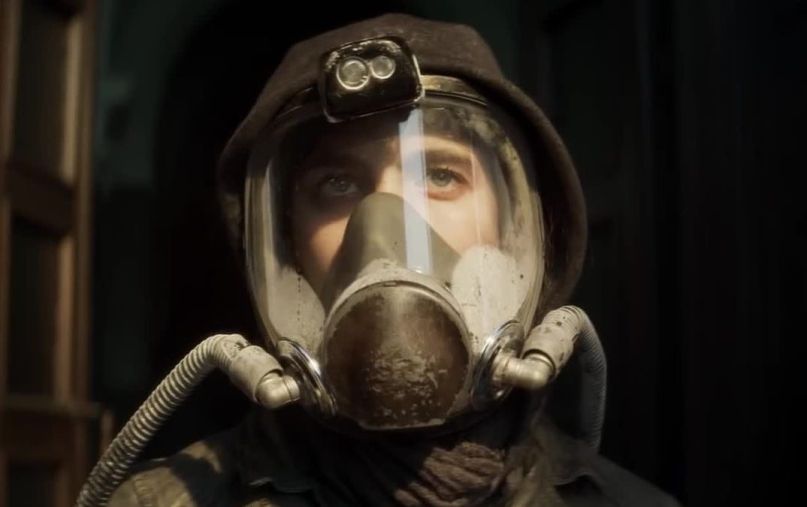 The Pitch: It’s the end of the world as we know it. And she feels … less than fine. She’s Sam Walden (Margaret Qualley), a lonely survivor on a beat-up planet Earth. Ships left long ago to live in outer space around IO, a moon of Jupiter. Here on Earth, the birds are dead. Fish are gone. Air’s poisonous. Lord knows how many people are actually left. But Sam, perhaps out of duty, boredom, or a sense of longing to please her scientist father? She carries on, searching for bacteria, testing mathematical scenarios on mutations, tending to her bees. She’s a loner in the face of the end times, just doing the bit of work that she can to help keep Earth alive, and stave off the fear.

Out of nowhere, a hot air balloon with Micah (Anthony Mackie) arrives. It’s just that abrupt. And he’s not all that nice. He was going to be a teacher before the current situation, but now he’s looking for Sam’s father. The two forge a bond, one built out of desperation, loneliness, and a need for some form of living companionship In A World that’s running out of people in a hurry. They slowly weigh whether to stay or escape in a space pod to Jupiter, and have conversations about the past and what Earth was like before its total decimation.

What starts as a sci-fi Walden becomes a serious Seeking a Friend for the End of the World, if those references work for you. And the fact that this review is desperate to think of similar, superior work this early on should tell you all you need to know.

Gloomsday: In a subgenre that grows more creepingly relevant by the day, it’s refreshing to watch a more grounded, naturalistic take on the End Times movie, and IO takes an almost short story-like approach to a substantial phobia. IO is a tiny affair with worldly implications, told with limited locations and a penchant for a wandering visual eye which illustrates what our demise might look and feel like. Toxic drips in the sewer, flickering through flashlights as Sam drudges on with her research. An observatory bedroom, with plenty of opportunity to gaze and wonder as the stars shine bright above a dying planet. Cloudy vistas and sumptuous cliff-sides worthy of a slideshow on Trip Advisor. It’s like staring at a spacey album cover for 90 minutes.

The characters themselves are minimalists, living in seclusion (Sam her huts, Micah his balloon box), and IO seems curious as to what might happen when two isolationists – not by choice – are forced to reckon with one another. To praise Jonathan Helpert’s take on pollution, people, and space colonization for its mumblecore leanings is easy enough. In small moments, IO can come across as downright poetic.

Alas, people ‘fucking hate poetry’, to borrow the seemingly new adage. More specifically, IO’s poetry is drawn out with page-breaks, blank space, and far too many ellipses. The film’s pacing is draggy and often yawn-inducing. Micah and Sam’s will-they/won’t-they of love and escape is drawn in longform. Mackie can’t deliver a line without maximizing pauses for theater school heft (“I was gonna be a teacher… once.”). Meanwhile, Sam’s blue-eyed youth reads more flighty than enigmatic. Her science comes across as purely referential. She talks about “Nowak’s Evolvability Equation” inspiring a tattoo, while speaking about people’s ability to mutate. She’s optimistic that humanity can learn and save itself, see? Throw in some references to Plato, talk about gardening and bees, and, well that’s that for these two. And those are the few mentionable bits of characterization and interaction in between pregnant stares and hastily edited side stories that provide bare minimum context. In short, IO is just not very riveting, character or plot-wise. And that’s saying something when the fate of the planet, the greatest human drama of all, hangs in the balance.

Sci-Why: As a human melodrama, IO is too faint. As science fiction, it’s glum and perhaps too accepting of humanity’s (inevitable) demise. And when the story runs the gamut from serene to sappy (and mostly immerses itself in the latter)? IO’s not worth saving time for.

If you want a small-scale meditation on man’s futility and clinging to what life we have left, you guys watch First Reformed yet? Children of Men is also on Netflix right now. And frankly, there’s no shame in admitting we crave our own demise. It’s why disaster movies are so successful. There’s something comforting about outlandish fear scenarios, because they’re so unreal. So given IO’s lack of heft, we’ll totally give a pass if you go looking elsewhere. Knowing, 2012, Melancholia, they’re all out there streaming as well. There are better, bolder works on the same subject, and IO just isn’t captivating, scientific, or insightful enough.

The Verdict: IO is dull, it drags, and it’ll beg the question: When will this, all of this, be over?