Film Review: Polar Cuts Itself Down With Its Own Retrograde Edginess 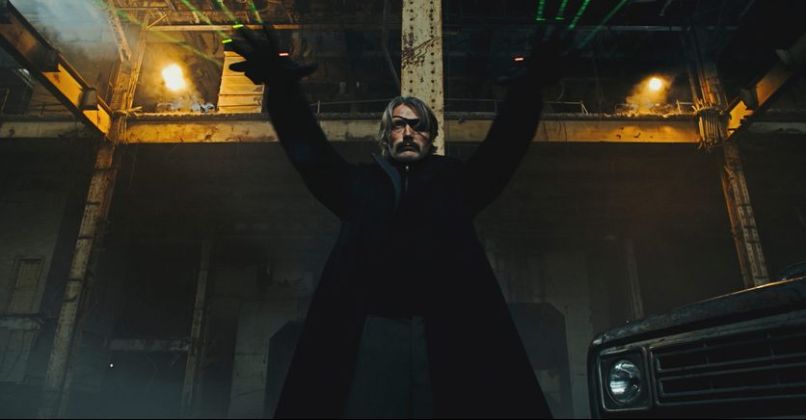 The Pitch: Duncan Vizla (Mads Mikkelsen), known in hitman circles as The Black Kaiser, is a weary contract killer nearing retirement. When he’s not off on jobs, he tries to live a quiet life in a cabin in Montana, in between friendly exchanges with his waifish neighbor Camille (Vanessa Hudgens). There’s just one problem with his upcoming retirement — flamboyant mob boss Blut (a simpering, over-the-top Matt Lucas) would rather kill his assassins once they hit retirement than pay out their exorbitant pensions. With a team of Blut’s own assassins on his way to disrupt his attempts at a normal late life, Duncan finds himself capping off his career in the bloodiest way possible.

If you’ve ever been privy to the confrontational, unsubtle perversions of an Uwe Boll movie, Polar might feel a little familiar. Scenes in which Blut’s team of assassins empty clips into a morbidly obese man in America, complete with bullets going through large soda cups and bags of cheese curls, wouldn’t feel out of place in Postal or Rampage, Jayson Rothwell’s screenplay burning with barely concealed contempt for everyone save for stoic dudes with eyepatches and mad fight skills. If lines like “I said I’d never fuck anyone older than my dad” count as a gut-buster for some, Polar might be the film for them.

Director Jonas Åkerlund comes from a long, illustrious line of music videos, from Madonna’s “Ray of Light” to The Prodigy’s “Smack My Bitch Up”, but his hyper-stylized proclivities are especially miscalibrated here. The original graphic novel on which it was based was a minimalist affair, with a Sin City black-and-white-and-red-all-over aesthetic that keeps its hitman antics restrained. That’s not at all the case here; Åkerlund, presumably working with peanuts on Canadian soundstages, soaks Polar in ugly washes of purple, yellow, and red, making the whole thing look and feel like a cheap amalgam of John Wick and Suicide Squad. It’s garish and overclocked in all the wrong ways, dumb characters cloaked in dumb costumes doing dumb things under dumb lighting.

As for the action, Polar‘s visibly meager budget harms its ability to thrill even on that base level. Action scenes are infrequent and all-too-brief, the tension sucked out of them by Duncan’s seeming invincibility; at one point, he shrugs off days of bloody torture to go on what Beatrix Kiddo would call a “roaring rampage of revenge”. Oh, and deadmau5 ostensibly provided the score for Polar, though you wouldn’t know it. Until the climax of the film, the score is barely noticeable — if it’s even present at all.

It’s a Mads, Mads, Mads, Mads World: Smack dab in the middle of the gleeful, eye-rolling chaos of Polar‘s cartoon world is star/producer Mads Mikkelsen, but even he can’t save the tediously confrontational slog on display here. Mads has long made a career out of playing smoldering, violent stoics, but as Duncan, he just seems sleepy and bored. Even in his (multiple) acrobatic sex scenes, the actor can’t seem to muster more than a half-lidded stare. It’s not that his effort would have saved this film, since so much of its two-hour runtime is spent away from him and with its circus of annoying supporting characters, but it might have helped.

Hudgens is especially misused here. Is her character supposed to be a teenager? A particularly naive twentysomething? Their dynamic feels ripped straight out of The Professional, but it feels bizarre coming from a thirty-year-old actress who seems to be playing a tween. She’s a mere sounding board for Duncan’s attempts to live a normal human life, until she’s kidnapped and becomes a damsel in distress. Even after a bloody, overlong climax in which Duncan fights to get her back, Polar wastes another fifteen excruciating minutes on an entirely unearned twist involving her relationship with Duncan — by then, though, the audience will already be begging for the sweet release of the credits.

The Verdict: One had hoped we’d put movies like Polar behind us as a culture — cheap, uninspired action flicks that substitute fat jokes and gratuitous, craftless violence for a personality. Every second grates and confuses in equal measure, with nary a thrill of inventive, exciting action filmmaking to break up the monotony. Of the cast, only Lucas and Richard Dreyfuss (wasted in a sparky little one-scene exchange with Mikkelsen) feel like they’re having any fun. Polar has too little value for anyone over the age of 17, and even then, you could just watch John Wick again.