Film Review: The Upside Is a Would-Be Feel-Good Drama That Leaves a Poor Aftertaste 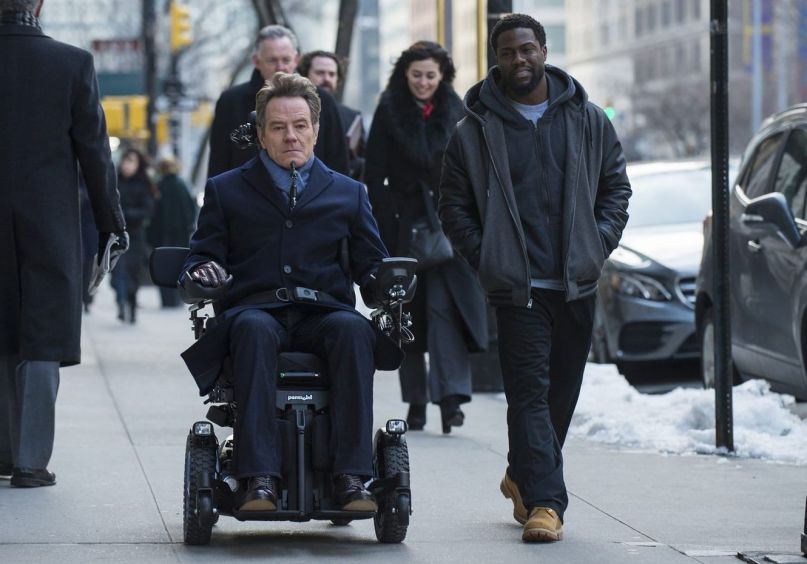 The Pitch: Dell (Kevin Hart) is on the brink in every possible way. His ex-girlfriend Latrice (Aja Naomi King) doesn’t want him around their son. He’s looking for work, but hardly committing to any, which has him looking for a home and barely meeting the terms of his parole. When he stumbles into an interview session for a “life auxiliary”, a full-time live-in assistant for individuals with specialized needs, he’s the least qualified applicant by a mile. But for Philip (Bryan Cranston), a high-society multimillionaire who was left quadriplegic after a hang-gliding accident, Dell is exactly the kind of life auxiliary he’s after, the kind of man who won’t drone on with pity over his condition. His chief executive Yvonne (Nicole Kidman) is hardly impressed, but soon the streetwise Dell and the quietly suffering Phillip begin to change one another’s lives in ways unexpected to them, and wholly expected to anybody who’s ever seen an inspirational melodrama of this nature.

Cut From a Familiar Cloth: In 2011, Intouchables became a major hit in France, and even now remains one of the country’s highest-grossing domestic productions ever. Based on a true story, its tale of men from opposite sides of the tracks and their indomitable friendship also became a major awards-season player. Some things translate flawlessly across cultural lines, and so went the kind of maudlin, predictable, feel-good morality play that the Oscars have historically favored on this end of the Atlantic.

The Upside retains much of Intouchables‘ plot, structure, and pacing, with director Neil Burger adding an even more lighthearted touch to what was already a dramedy with its emphasis on the latter. Aside from a meager handful of dramatic moments (Dell’s early theft of a rare book, Phillip’s thinly drawn struggles with depression), The Upside is strictly in the business of audience uplift. That’s true of everything from the sardonic exchanges between Hart and Cranston (easily the best scenes in the film), to the generally despair-free way in which the story sidesteps some of its more tragic facets.

The Downside: The biggest problem with The Upside, in several different respects, is the way in which it’s clearly pitched as a coming-out party for Kevin Hart as a dramatic performer. After becoming one of the most visible (and profitable) comedians of his generation, the recently embattled Hart clearly saw this film as an opportunity to branch out and demonstrate his range for audiences more familiar with his mile-a-minute comic delivery.

The trouble then emerges twofold. First, Hart seems reluctant to entirely abandon the schtick on which he’s made his name, leading to certain sequences in The Upside which seem as though they were cut and pasted from an entirely different and somehow even broader movie. When Hart finds a comfortable rhythm, there are moments that certainly do suggest he has more going on as an actor, particularly in Dell’s casual-but-firm insistence that Phillip be looked in the eye and addressed on his own. There’s a soulfulness to certain aspects of Hart’s performance, which makes the film’s reliance on high-concept setups like catheter panic and smoke sessions all the more grating.

The other big issue with The Upside is that it ultimately sidelines Phillip’s story for Dell’s. Whatever you may think of Cranston playing a quadriplegic character as an able-bodied performer, he’s left to draw a character that the film never truly seems to find on its own. The actor does fine enough work, lending Phillip a wistfulness that plays at odds with the gruff characters Cranston’s stuck to in recent years. Yet when the film leaves to follow Dell’s attempts to reconcile with his past and be a better father, it leaves Phillip behind, who’s then tasked with waiting around until he can help Dell complete his own dramatic arc. It’s a strangely dehumanizing perspective to take on Phillip, particularly when the film occasionally acknowledges the ways in which people condescend to the disabled on a daily basis. The inspiration the film pursues ultimately ends up being less about Phillip learning to live again, and more about the ways in which Dell grows from having known him.

The Verdict: Although its leads find the odd moment of charm together, even Kidman in what’s somehow the worst-shaded part of all three, The Upside fumbles far too often when it attempts to enlighten or edify its audience. There’s a disingenuousness lurking beneath the swelling score and comic interludes, a sense that this is a film less in the business of telling a genuine story than in cherry-picking its most appealing aspects while racing through anything else at speed. (The one scene in the entire 122-minute film in which Phillip’s condition becomes a crucial part of the scene feels almost obligatory, a generator of blatant pity that the character himself would abhor.) It’s entirely possible to tell this story, perhaps even without the troubling notes of racial patronization that both versions have now struggled with. It would just have to have a perspective that nobody behind The Upside seems to have considered at any great length.

Where’s It Playing? The Upside opens nationwide on January 11th.