A meta-sequel in the works 18 years after the original 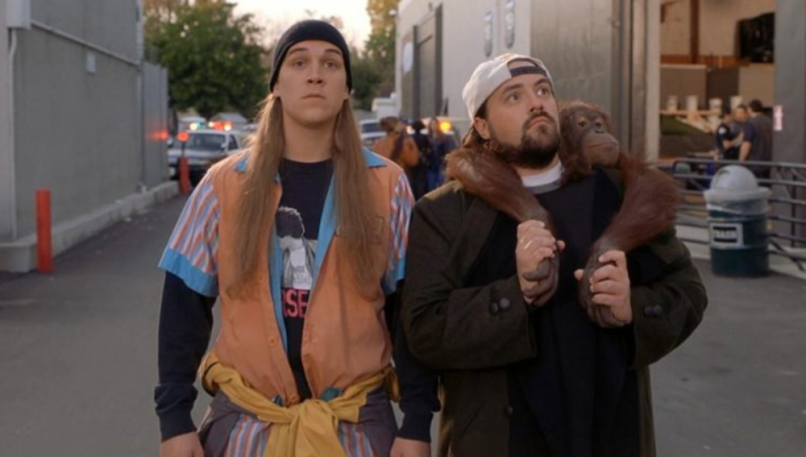 Jay and Silent Bob Strike Back

Why in God’s name would you wanna keep writing about characters whose central preoccupations are weed and dick and fart jokes? Well, maybe because they’re beloved cult characters and bigger successes than any of your recent works. Either way, Kevin Smith has confirmed he’s returning to his early Hollywood days by reviving the centerpieces of his View Askewniverse, Jay and Silent Bob.

The filmmaker has been teasing the bluntly titled Jay and Silent Bob Reboot for a few years now, with the latest update saying the sequel to 2001’s Jay and Silent Bob Strike Back was targeting a 2019 release. While it seems things have taken a little longer than expected to get off the ground (Smith’s recent heart attack might have had something to do with it), Smith has now confirmed that (pre-)pre-production on the project has begun.

Smith tweeted an image of himself with longtime producing partner Jordan Monsanto, taken by Jay himself, Jason Mewes, confirming that the team has started the new year by getting right to work. “Spent the first day of 2019 having a #JayAndSilentBobReboot pre-pre-production meeting…” Smith wrote. “Took this pic… to both mark the moment and to document that we were the only dopes in Hollywood working on the holiday.”

Spent the first day of 2019 having a #JayAndSilentBobReboot pre-pre-production meeting at our holiday-roomy @WeWork office! @JayMewes took this pic of me and @JordanMonsanto to both mark the moment and to document that we were the only dopes in Hollywood working on the holiday. pic.twitter.com/xTNrpN6OF6

Speaking last year, Smith explained how Jay and Silent Bob Reboot isn’t really a reboot, but instead features a reboot as part of its plot as means to send up Hollywood’s current obsession with reboots and remakes. As he put it,

Jay and Silent Bob made their first appearance in Smith’s cult classic film Clerks, subsequently becoming the connecting thread in the View Askewniverse films like Mallrats, Dogma, and Chasing Amy. More recently, Smith has focused on his True North Trilogy, which began with 2014’s Tusk and continued with 2016’s Yoga Hosers. The third entry, Moose Jaws, is expected in 2020, and may connect the films to the Askewniverse with an appearance by Jay and Silent Bob.