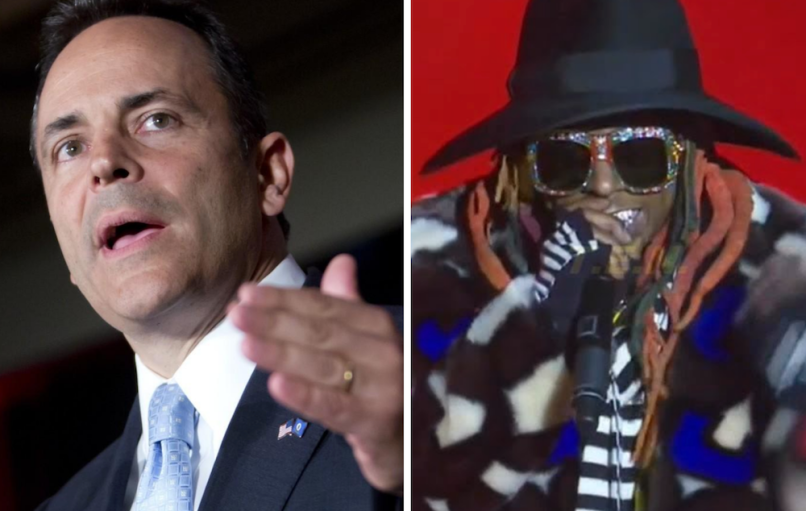 Clemson demolished Alabama on Monday night to win the 2019 National College Football Championship. The game may not have been much of a contest, but a much juicier showdown played out between Kentucky Governor Matt Bevin and Lil Wayne, who performed during the game’s halftime show alongside Imagine Dragons.

While Lil Wayne’s choice of outfit was an easy target for the internet and fashion police, the Republican politician instead directly slammed the MC’s talents and questioned his status in the rap world.

“Way to ruin an entertaining @Imaginedragons half-time concert with the weird rantings of a tired, has-been like @LilTunechi,” Bevin wrote on his personal Twitter account. “One act still rising… The other, not so much.”

Way to ruin an entertaining @Imaginedragons half-time concert with the weird rantings of a tired, has-been like @LilTunechi… One act still rising…The other, not so much…

Lil Tunechi may no longer be in his prime, but Bevin’s comment on Imagine Dragons being “still rising” should probably automatically cancel out his music criticism altogether (that or the fact that he called them “entertaining”). Imagine Dragons have been around since 2008 and their early 2012 hit “Radioactive” earned multiple Grammy nominations. Their debut album, released seven years ago, went on to become the fourth best-selling LP in the US in 2013. We’re going to assume Bevin has no clue about the importance of the release of Lil Wayne’s long-awaited Tha Carter V.

Popularity also might not be something the Kentucky governor is exactly qualified to gauge. According to Louisville’s Courier-Journal, Bevin was recently named the fourth least popular governor in the entire country. Maybe it has to do with his out-of-touch views and mediocre grasp of pop culture as a whole; he’s repeatedly blamed video games, music lyrics, and even zombies (seriously) — but not the lack of gun control — for mass shootings.

Revisit the Clemson vs. Alabama halftime show below.