Newly elected Baseball Hall of Famer Mariano Rivera: “With all due respect to Metallica, I don’t listen to that kind of music”

That didn't stop the band from congratulating the legendary Yankees pitcher 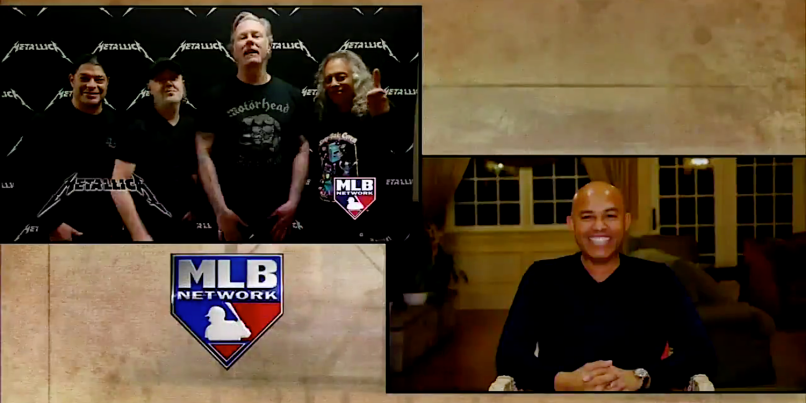 Legendary New York Yankees pitcher Mariano Rivera today (January 22nd) became the first-ever player to be unanimously voted into the Baseball Hall of Fame, and some may say he owes a tip of his hat to Metallica. The all-time Major League Baseball saves leader famously entered games to the Rock & Roll Hall of Fame act’s massive hit “Enter Sandman”.

As if facing Rivera’s nasty cutter wasn’t intimidating enough for opposing batters, hearing the first few notes of “Enter Sandman” must have put more fear into hitters as they waited for the closer to begin his warmup tosses.

Metallica themselves even congratulated Rivera this evening upon news of his historic unanimous election. In a video message, frontman James Hetfield said, “We, Metallica, took a vote here, and it’s unanimous — congratulations from the entire Metallica family, Mariano, on your induction into the Baseball Hall of Fame.”

Lars Ulrich then chimed in, “It’s well deserved, and we look forward to watching you enter the Hall this summer.”

Hey Mo, we've got some old friends that wanted to say congrats. pic.twitter.com/enlwrVpaCc

That all said, Rivera isn’t exactly about to fire up “The Black Album” anytime soon. In an interview with MLB Network following the news of his unanimous election, the pitcher was asked how many Metallica shows he’d been to, and responded, “With all due respect to the guys, I’ve never been to one of them.” He added, “As a Christian, with all due respect to Metallica, I don’t listen to that kind of music.”

Watch Mariano’s reaction to Metallica’s congratulatory message in the tweet below, and see the full interview with the pitcher here.

.@Metallica dropped in to congratulate Mariano Rivera on his unanimous election to the Hall of Fame!

Check out the full interview with the @Yankees legend here: https://t.co/4CLO3uIcmK pic.twitter.com/2giMDjXHB3

So, it looks like Mariano won’t be catching Metallica on their ongoing “Worldwired Tour”, and he probably doesn’t care about how we recently ranked the thrash masters’ albums from worst to best. The band just launched the latest North American leg of the trek this past Friday.