"Celebrate with this commemorative plush with detachable head" 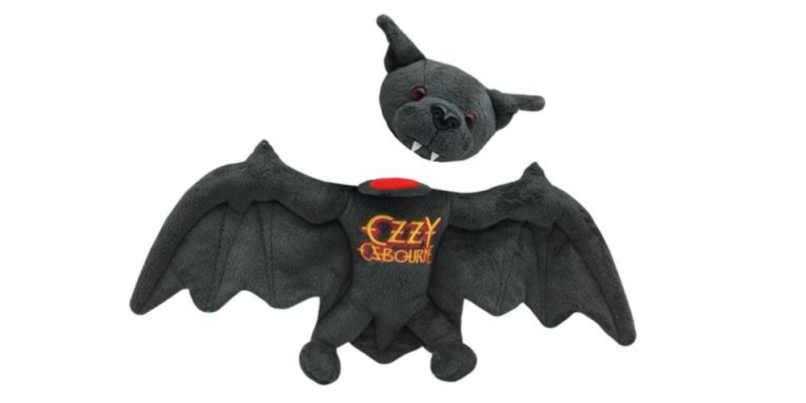 One of Ozzy Osbourne’s most infamous onstage incidents happened on January 20th, 1982, when the Prince of Darkness bit the head off a bat during a show at Veterans Memorial Auditorium in Des Moines, Iowa. Now, to mark the anniversary of the occasion, Ozzy is hawking a new plush toy bat with a detachable head!

It’s fitting that the metal legend is selling a toy bat, as he originally thought that a fan had thrown a rubber bat onstage, hence biting the head off without thinking twice. It was only later that he realized it was a real bat, and the incident made headlines all over the world, and has been associated wit the iconic rocker ever since.

In a tweet promoting the plush bat, Ozzy writes, “Today marks the 37th Anniversary since I bit a head off a f*cking bat! Celebrate with this commemorative plush with detachable head.” The Tweet also shows an animated GIF showing the head detaching from the rest of the toy.

Today marks the 37th Anniversary since I bit a head off a f*cking bat! Celebrate with this commemorative plush with detachable head.https://t.co/Of23jCDtaa pic.twitter.com/U8ZkmOYOey

On the merch page where the toy bat is for sale for $40 (but sadly already sold out), the description reads, “The Ozzy Osbourne Plush Bat is a web exclusive. Bring the legendary moment in rock history to life with this soft toy Plush Bat, featuring the Ozzy Osbourne logo and a velcro detachable head.”

Ozzy seems to be in a giving mood these days. Yesterday, we reported that he granted his terminally ill former drummer Lee Kerslake’s dying wish by sending him platinum discs for the albums Blizzard of Ozz and Diary of a Madman.