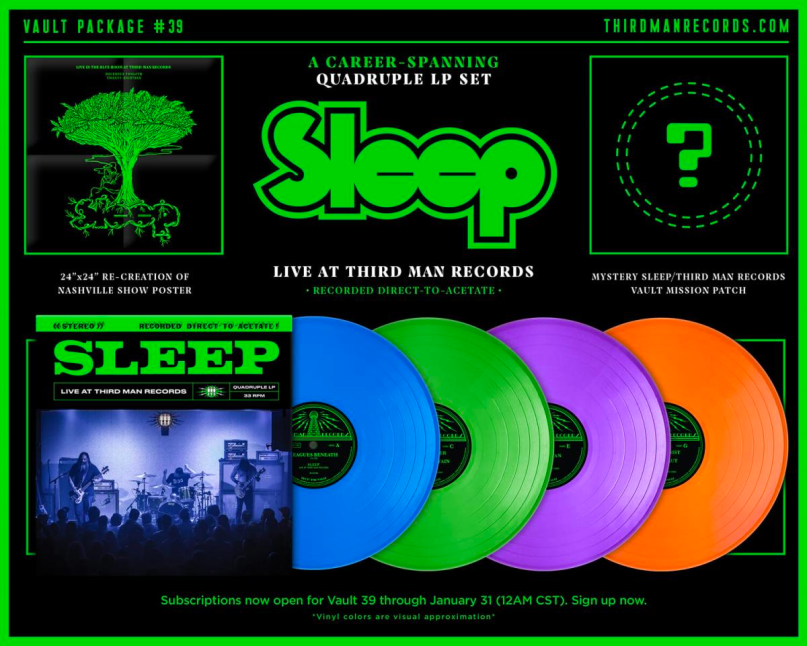 The world’s favorite stoner doom trio, Sleep, are kicking off 2019 with a big bang. The band just announced that they will be releasing a quadruple-LP live album through Third Man Records’ Vault, a subscription-only series that offers rare treats from the label’s roster.

Most often those releases feature a project of the imprint’s owner Jack White, but this time around they are putting the spotlight on Sleep with a package that includes a colored vinyl 4-LP set featuring the career-spanning performance the band gave at Third Man’s flagship store in Nashville this past December, a reproduction of the poster designed for that show, and a “Mystery Sleep/Third Man Records Vault Mission Patch” for your denim jacket.

As with nearly all the live recordings that Third Man has released to date, Sleep’s two-hour set at the label’s headquarters was recorded using the label’s “direct-to-acetate/audio mixed and mastered in real-time system,” according to the press release accompanying this announcement. The performance features songs from throughout the band’s nearly 30-year run, including a version of “Dopesmoker,” the epic-length title track of their 1999 album.

The set, titled Live at Third Man Records, is only available through a Third Man Vault subscription. Fans have until January 31st to ensure that they’ll receive a copy of this release and the accompanying goodies. Click here to register.

While Sleep has been riding quite a high since the release of The Sciences last April, including landing in Heavy Consequence’s list of the Top 25 Metal and Hard Rock Albums of 2018, things have been a little rockier in the world of the band’s guitarist Matt Pike. Earlier this week, he announced that his other band, High on Fire, would be canceling their 2019 tour.

Pike, who already had a toe partially amputated in the fall, is apparently at risk of losing his entire big toe and a larger portion of his foot due to complications from his ongoing battle with diabetes. In the statement that came out yesterday, the 46-year-old musician promised a more complete medical report and said to his fans, “Please forgive me, and if you know anything about me, you know this is not like me. We will be back!”

Side One:
Leagues Beneath

Side Two:
Dopesmoker (Part One)

Side Four:
The Clarity
Aquarian

Side Seven:
The Botanist
Dragonaut