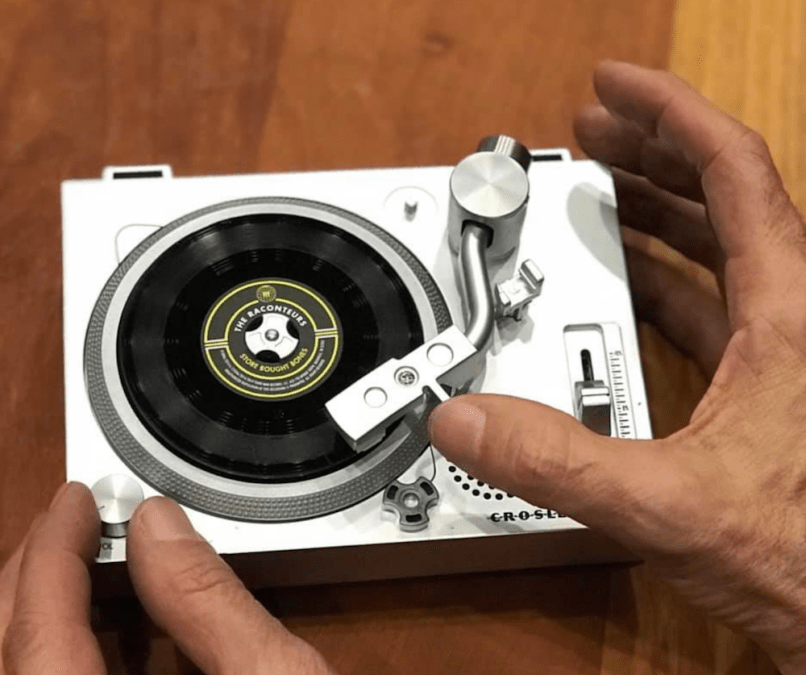 This year is shaping up to be one for the books for The Raconteurs. The rock supergroup led by Jack White is planning to release its first album since 2008, as well as return to the road for a supporting tour.

Now, they’ve announced another treat for fans, with a very White-ian twist: They’re putting out a 3-inch single (!!) exclusively for Record Store Day 2019.

As Exclaim points out, a photo of the adorably mini-record was posted on Record Store Day’s Facebook page on Wednesday. A closer look at the image reveals that the single in question is “Store Bought Bones”, taken from The Raconteurs’ 2006 album, Broken Boy Soldiers. A special Crosley turntable for 3-inch records is also shown, along with the hashtag #RSD3, hinting that the tiny device will also be sold for RSD2019.

Per the photo’s caption, collectors should expect “a whole batch” of other 3-inch singles available for purchase on Record Store Day, which goes down April 13th.

Fans of all things Jack White will probably not be surprised to hear that this isn’t the first time the Detroit rocker has fiddled around with the 3-inch medium. In 2005, The White Stripes sold a limited-edition mini record player called the “Triple Inchophones” and a corresponding series of 3-inch singles of “Seven Nation Army”, “Fell In Love With a Girl”, and “Hotel Yorba”, among others.

Below, check out a video of “Seven Nation Army” played on one of those Triple Inchophones, followed by a brief description of the unique release courtesy of YouTube user Kneel Allen.

During their 2005/06 tour the White Stripes sold a small record player at their merch stand. These Triple Inchophones were the trademark red & white of the band and did not sell too well at first, until Jack explained exactly what they were on the bands’ official site. The record players were made by a Japanese company called 8-ball Bandai. These record players could only play 3-inch records. When Jack and Meg White invested in buying the machines from the company they were led to believe there were many units ready for distribution; in fact, the company had destroyed all but 400 of their units.

The White Stripes proceeded to buy these remaining 400 units and sell them on tour along with a set of specially made 3-inch singles. The cost price of a unit at the shows was around $120.

Previous Story
Dwayne Johnson: “This generation [is] looking for a reason to be offended”
Next Story
Netflix is being sued by Choose Your Own Adventure over Black Mirror: Bandersnatch
Popular
More Stories
[fu-upload-form form_layout="media" title="Submit Your Photo"][input type="hidden" name="ugc" value="1"][/fu-upload-form]