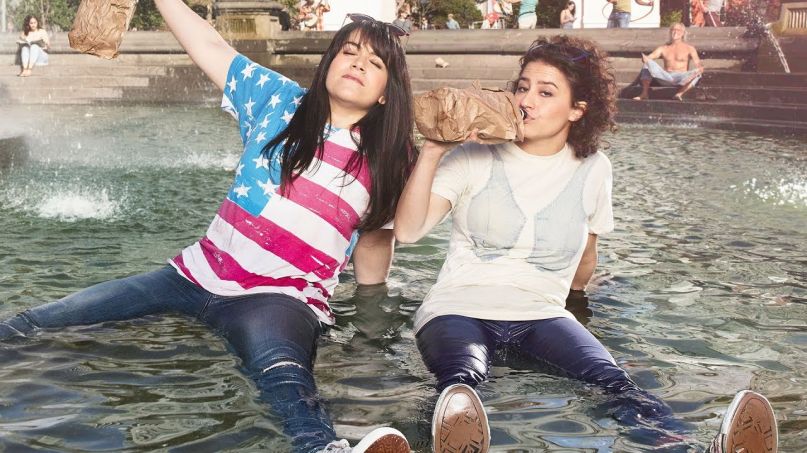 The Pitch: Yas, bitch. The queenz are back — at least for one final season. Abbi (Abbi Jacobson) is still working at Anthropologie, but she’s been promoted to the sales floor. She’s still angling for a way to put her art degree to use, though (ONE DAY SHE WILL DESIGN THAT WINDOW DISPLAY). It’s unclear from the episodes made available for review if Ilana (Ilana Glazer) is actually working this season — what else is new? — but at least she’s back together with New York’s most lovable dentist, Lincoln (Hannibal Buress). Jaimé (Arturo Castro) also has found love in his life, with the introduction of new boyfriend Johnny (Guillermo Díaz). Don’t be fooled by the easy casualness of the early plotlines, though. The Broad City gals are growing up, and Season 5 packs an unexpectedly emotional punch.

Ellen’s Not the Only Relatable Biotch: In reflecting on Season 5 to The Hollywood Reporter, Jacobson said, “[Broad City] was this thing that happened in this time, because it’s very pop-culture reference-y and it’s very specific to right now.” The new season capitalizes on Jacobson and Glazer’s ability to capture the pop-culture zeitgeist. Complete with filters and emoji commentary, the first episode celebrates Abbi’s 30th birthday with Ilana following the duo on Instagram Stories as they trek through Manhattan — falling down manholes and accidentally kidnapping children. But the show’s not all silly physical humor. Some of BC’s best pointed humor has come when the two parody their own “white wokeness,” as Ilana does in the season premiere by getting just one braid (“a touch of cultural appropriation shines a lot on the issue”). Jacobson and Glazer have a great ear for the moment, so whether a scene’s political, silly, or gross AF, Season 5 continues to be pretty spot-on humor.

Hold Up. Did Ilana Say the Word “Career?”: What the abundant eggplant emojis of Episode 1 belies, however, is that Abbi’s big 3-0 is actually setting a new tone for Season 5. When a stranded kid in the mall calls Abbi “mom,” the 30-something goes through the existential crisis every not-as-young-anymore person goes through: realizing she is old enough to be a mom. Everywhere the ladies turn this season, they’re confronted with the fact that the world has grown up without them. Abbi’s friend from college, Smelly Pussy Donna, works at MOMA now. Lincoln is talking crazy adult things like buying a house and having kids. Even Jaimé might be looking toward a future that doesn’t involve popping pimples off of Ilana’s back.

Apparently, Jaimé’s so stressed about how serious his relationship with Johnny is getting that an old bad habit has resurfaced — our boy’s a hoarder! Being the caring and totally-grounded-in-reality roommate she is, Ilana instigates an intervention, taking on the role of psychologist in helping Jaimé confront his fears of going to the next step with Johnny, even if that possibly means leaving Ilana roommateless. Jaimé’s not the only one moved by the conversation. Ilana begins to wonder if this is something she could be good at, if it could be a, like, career?! Whoa. Does Illana have a life plan that doesn’t involve getting stoned and singing her heart out to “Hit Me Baby One More Time”? WHAT IS GOING ON?

But for a show that’s always been premised around two ladies doing nothing to the fullest, you can see intention peeping through the cracks of each episode of the final season. Storylines are getting tied up, and new paths are getting laid out. What is this new emotion? Some of these scenes are actually kind of … sad. It’s bittersweet seeing the girls get their lives together, because we know inevitably that means our time with Abbi and Ilana is coming to a close.

I’m Not Crying, You’re Crying: Abbi and Ilana always have been the heart and soul of BC, but Season 5 is smart enough to occasionally put the talents of Hannibal Buress and Arturo Castro front in center. Since we’ve seen them last, Buress has been headlining a solo tour through the US, and Castro nabbed a role on Netflix’s Narcos. Both men’s roles on Broad City started as side characters, less known for who they are themselves than how Ilana comically uses everyone she comes in contact with. But both Buress and Castro have emotionally searing performances this season. It comes at times when both Lincoln and Jaimé have to make really adult decisions about their respective futures, even if it means leaving Ilana behind. To the show’s credit, somewhere along the line, these minor characters became fully fleshed-out people whom it’s impossible not to root for.

In an interview with The New York Times, Johnson and Glazer reflect that they were bawling while writing the final scenes (and then bawling again while filming). And I think the real Abbi and Ilana’s realization that things were coming to an end permeated every episode of the final season. It’s still slapstick humor and hilarious, but each time a storyline ties up (which kind of feels like every episode), that Season 5 theme of the inevitably of growing up adds a hint of pathos that just wasn’t present on the show before.

The Verdict: Even though Broad City’s characters are so extreme that the show seldom captures what most viewers do (unless you go around making video montages of you best friend’s butt — I can’t speak for every reader), the show’s very good at capturing how we, as a culture, feel. Glazer and Jacobson have always been really good at the everyday moments we all experience, and this season it’s no different. Take the season premiere. There’s no profound takeaway: just Abbi and Ilana debating quitting social media because we’re constantly comparing ourselves to others and/or performing rather than living in the minute. Even the absurd physical humor is relatable — like, who doesn’t have dry feet (although you probably don’t take a cheese grater to your dead skin like Ilana does this season). Humor is a good antidote, but so is a show that just gets it, and that’s what Broad City offers. This final season even steps it up with a bit of reflection and (gasp) character development. If you’re going to end, you may as well end on a high note. And with lots of emojis. ????