The late-night host's shorter, slicker format has some minor growing pains to endure 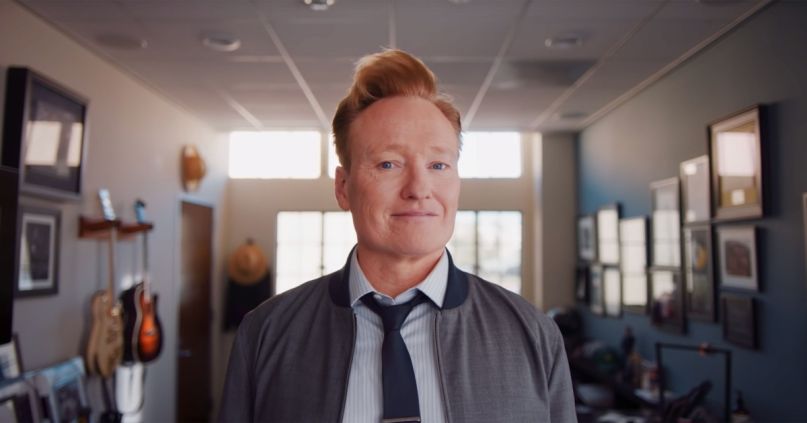 The times are changing, and Conan O’Brien is changing with them. In the age of YouTube, where most talk shows are more frequently consumed in digestible chunks on streaming the next morning, the 25-year late-night veteran is shaking things up after a three-month hiatus with a retooled version of Conan on TBS, which premiered last night. Gone is the desk, the band, and even half of the show’s runtime, in favor of a stripped-down half-hour program focused squarely on Conan, Andy Richter, and a single celebrity guest.

Viewed as a whole, it can seem a bit like a minor tragedy — Conan and Andy’s frequent self-deprecating snipes at their own dwindling popularity are certainly on brand for the cynical comics, but there’s a twinge of regret behind them this time. They’re laughing in the face of cancellation, not just of their show but of the format at large; this leaner reinvention could be a second life for the show … or its death knell. But that isn’t going to stop them from putting on a damn entertaining hour of television, even if it’s only half as long. Here are some highlights from last night’s premiere.

“I Assure You, It’s Gonna Feel Like Two Hours”

Right off the bat, Conan’s show feels different — the new set looks like Conan has been shrunken down and hidden in a ventilation shaft of an alien spaceship. As Andy describes it, the new set looks like a “strip club from Grand Theft Auto.” The sleeker, minimalist look fits Conan’s new aesthetic; gone is the slick, boxy suit in favor of a bomber jacket and shirt-tie combo, or as Conan calls it, “the cool biology teacher that sells students weed after class.”

The change has even affected Andy, who sits off to the side on a bar stool in the corner, sniping like the devil on Conan’s shoulder. It’s certainly an adjustment, and these aesthetic changes combined with the shorter runtime make the two feel rushed and a little uncomfortable. But they still have that ineffably snarky energy they’ve always had, and it’s entirely possible they’ll get that energy back in future weeks.

“There’s So Much Change… Where’s the Band?”

Ostensibly, one of the reasons the show’s slimming down is to give Conan more room for comedy bits and experimentation and less obligation to celebrity guests; however, this first night only had room for a tepid, watered-down This Is Us parody that’s a year late and half as funny as it needs to be. In an attempt to lend the show the kind of pathos ABC’s hit family drama engenders, Conan and Andy dress up as an embattled couple trying to revive that spark and reflect on the format change’s many small losses. Milo Ventimiglia even shows up as their “son” to assure them everything’s okay.

Conan and Andy’s chemistry is as fun as ever, but the joke can’t help but feel a little over-baked — not to mention rushed, given the shortened format they have to work with.

Tom Hanks Gets It Straight

When introducing so many big, scary changes to your audience, it helps to smooth things over with a nice, breezy guest who can make you feel at home. Luckily, Tom Hanks wasn’t doing anything that afternoon, so the Nicest Man in Show Business graced Conan’s new set to usher in the half-hour format’s emphasis on a single guest.

The new set switches the dynamic of Conan’s interviews from questions across a desk to a three-way Q&A panel/shit-talking session across three comfy, blue recliners, which makes for a more casual and enjoyable watch. It doesn’t hurt that Hanks is still the most charming person in the known universe, as he slid into the Conan-Andy dynamic with nary a feather ruffled.

By the time his interview ended, and they had joked about Hanks dropping his lapel mic, remembered the late, great Penny Marshall, and speculated on what they’d do if they had “concave asses,” you’d be forgiven for thinking this was Hanks’ show in the first place. Whether that bodes well for the growing pains of Conan’s new format or not, it at least makes for an entertaining half-hour of breezy late-night television.