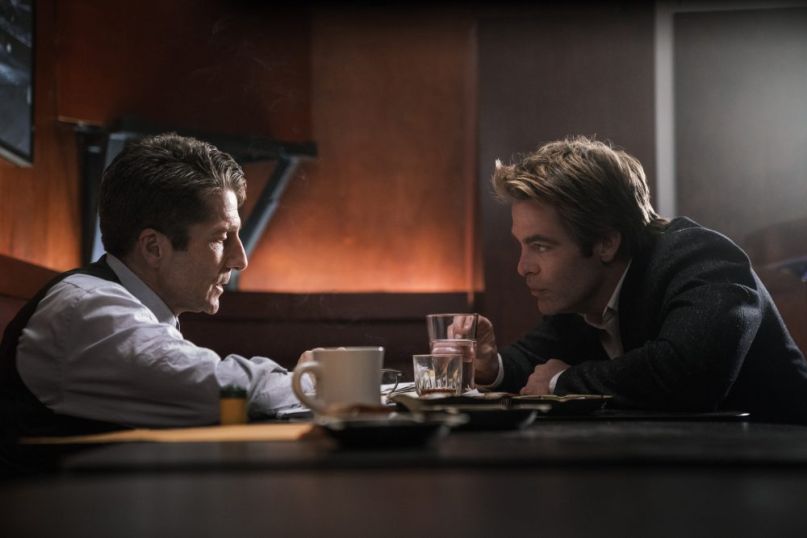 I Am the Night (TNT)

The Pitch: The Black Dahlia is one of the most famous unsolved murders in American history, the brutal killing of Elizabeth Short in 1947 Los Angeles capturing the imagination of post-World War II America in a way nobody had seen before. Cut to 1965, an era of growing racial unrest and Vietnam-era malaise, and a young, light-skinned girl of mixed race named Fauna Hodel (India Eisley), who suddenly discovers that her mother Jimmie Lee (Golden Brooks) isn’t her birth mother at all. In fact, she may not be black at all. Armed only with the name of her biological grandfather, George Hodel (Jefferson Mays), Fauna goes to LA in search of her biological family. Her quest brings her across the path of disgraced journalist Jay Singletary (Chris Pine), a man plagued by a coke addiction, post-Korean War PTSD, and a stubborn streak. He’s on the same trail, but for entirely different reasons: Hodel’s been closely connected to the Black Dahlia murder, the story that cost Singletary his career. The duo find themselves chasing after George Hodel for their own reasons: Fauna for clues about her identity, Singletary in search of a life-saving sense of purpose.

The Case: The prospect of Patty Jenkins and her Wonder Woman star Chris Pine taking on a true crime story (with the breathing room of a limited series, no less) is an exciting one, and for the most part I Am the Night delivers on those promises. Created and written by Warrior scribe (and Jenkins’ husband) Sam Sheridan, the limited series feels like a stripped-down, mid-budget True Detective season in all its best and worst ways — enigmatic investigators on the brink of emotional collapse scrambling for meaning against an indifferent universe, occasionally plagued by moments of presentational horror.

The show’s angle toward the Black Dahlia murders, and George Hodel specifically, is the source of some of the show’s hardest left turns toward pulp. In this universe, Hodel is seemingly the leader of a strange, hedonistic cult at his palatial mansion in Los Angeles, where orgies and performance-art “happenings” lend a splash of the surreal to I Am the Night’s visuals. His wife Corinne (fellow Wonder Woman holdover Connie Nielsen) is a wonderfully arch Norma Desmond type, particularly in her interactions with the endlessly curious Fauna, toward whom she holds a sincere attraction. Together, I Am the Night turns an ostensible serial-killer story into a Hannibal-esque exploration of the aesthetics of murder and power.

The Detectives: Speaking of its characters, I Am the Night’s twin protagonists offer some intriguing contrasts between the two halves of the show’s seedy Los Angeles world. As Fauna, Eisley is wide-eyed and resolute, the sole beam of optimism amidst a sea of drunks and misanthropes. She’s clearly the moral center of I Am the Night, proof that the tear gas-enshrouded world of 1960s Los Angeles need not stay that way. Race is a central (if inelegantly explored) concept of the show’s themes, Fauna navigating her identity and her reality as a white girl raised among black people amid a city bubbling with the interracial resentments that would lead to the explosive LA Riots.

Contrast that with Pine’s twitchy, darkly comic schlub Jay Singletary, a character wholly imagined and grafted onto Fauna’s real-life story, an amalgam of every shifty loser detective from Elliot Gould in The Long Goodbye to Joaquin Phoenix in Inherent Vice. Much of I Am the Night is an all-out scenery feast for Pine, channeling Brad Pitt and Jeff Bridges in their respective primes — a pretty-boy character actor who knows how to channel sly affectations into a giddily bizarre performance. It’s a genuine thrill to see Pine verbally spar with his world-wearied editor (played by Leland Orser), and physically spar with some of Hodel’s goons, scuffing up his uniform of a crumpled suit and white sneakers with every pratfall and punch, the star having never looked more haggard or bloodied. His character often feels like a compilation of gritty noir cliches, and his personality flaws occasionally seem to disappear between episodes, but Pine manages to elevate the role into something endearingly zippy through sheer force of will.

The Crime Scene: Through all of this, I Am the Night is interested in deeper concerns than its salacious central mystery. While the Black Dahlia murders are the series’ major link to true crime history, Fauna and Singletary’s respective journeys reckon more with personal pasts and culturally turbulent presents. As their paths cross against crooked cops, amoral journalists, and the baroque aesthetics of LA’s cult-like upper crust alike, I Am the Night becomes more interested in painting a pulpy hell for its characters to navigate than offering a clean beginning-to-end caper. Whether through art or reputation or identity, the players of I Am the Night wish to assign their lives some measure of meaning; as Singletary hopes to restore his reputation and morality by helping Fauna, so too does she hope that her real family gives her a glimmer of who she really is in the world.

The show is at its best when Jenkins resists the literalism of the story, leaning hard into presentational moments like Singletary’s frequent nightmares about the people he’s killed, or Hodel’s acolytes occasionally seeing him as a terrifying, groaning stag figure (shades of Hannibal’s Gothicism abound). National Guard soldiers wander aimlessly through tear gas in the LA streets, and Hodel paints abstract portraits of his alleged victims. Amidst its TV-level budget, the show’s cinematographers (including Wonder Woman’s Matthew Jensen) paint a terrifying, dynamic snapshot of the show’s universe.

The Verdict: At its core, I Am the Night is a gritty, pulpy, deeply satisfying mood piece that works to the strengths of both creator and star. It’s a showcase for Jenkins’ command of moody, tense direction, of Sheridan’s pulpy meditations on masculinity, and of Pine’s unconventional leading man sensibilities. With a capable co-star in Eisley, and a multitude of ideas bouncing around in its heightened vision of a morally decaying Los Angeles, I Am the Night manages to elevate its dime-store lasciviousness to something approaching meditative high art. But with every affectation and crime-novel bon mot Pine gets to lay out (“if you’re feeling froggy”, he says to someone he wants to fight, “we can do this dance — just pick a lily pad”), Jenkins and co. never forget the kind of pulpy entertainment that people want out of shows like these.

Where’s It Playing?: I Am the Night leaves a trail of bread crumbs for audiences to follow over six Monday evenings on TNT, beginning January 28th.