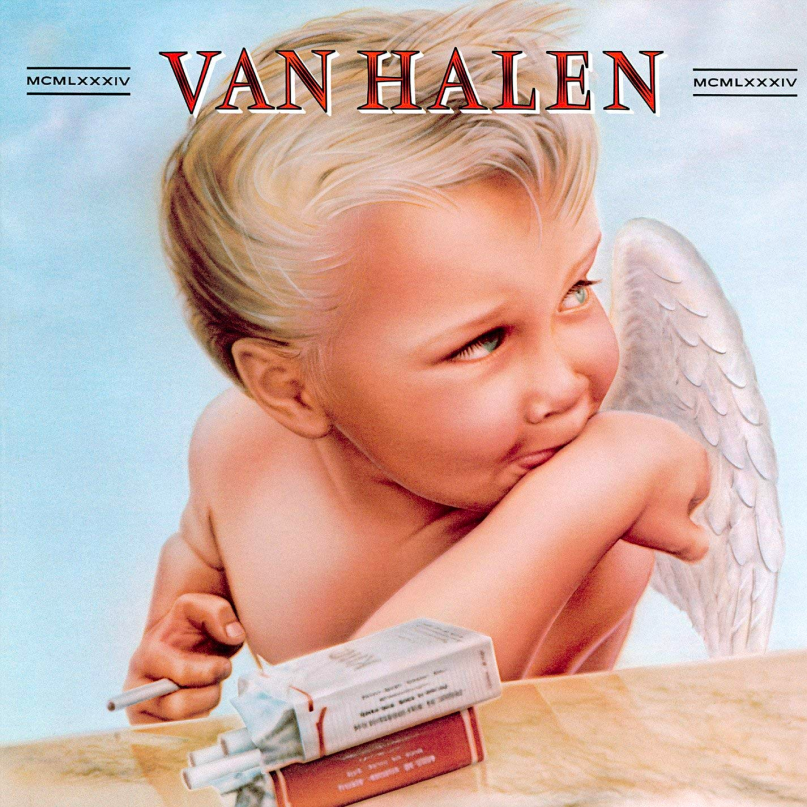 In the early ‘80s, synthesizers and keyboards within the realm of heavy metal and hard rock was a great-big no-no. Sure, a few artists managed to slip through the cracks (Deep Purple, UFO, and Ozzy come to mind), but for the most part, synths and keys were equated with new wave and pop music. And headbangers wouldn’t be caught dead listening to A Flock of Seagulls or Duran Duran.

But one band bold enough to infuse synthesizers into their mega-decibel sound changed all of that, and re-shifted the direction of hard rock for the foreseeable future. Of course, we’re talkin’ ‘bout Van Halen, and their masterpiece 1984.

To backtrack a bit, by 1983, Van Halen — still comprised of the classic lineup of David Lee Roth, Eddie Van Halen, Michael Anthony, and Alex Van Halen — were already one of the top rock bands in the world (on the strength of their arena anthems, the pin-up looks of Roth, and the fleet-fingered guitar stylings of EVH).

However, their last album, 1982’s Diver Down, was a rush-job. A stand-alone single in early ‘82, a cover of Roy Orbison’s “Oh, Pretty Woman,” was such a surprise hit that the label wanted a full album to cash in on its success. The result was an album that included that track, plus a bunch of other cover songs, mixed with a few originals.

This was not the first time VH worked at a brisk pace in the studio (their classic self-titled debut from 1978 took only two weeks to complete). But the group made it a point to take their sweet time with what would turn out to be studio album #6. And the main reason they could do so was because this would be the first album that they recorded entirely at EVH’s newly constructed 5150 Studios, in Studio City, California (and once again, overseen by producer Ted Templeman).

Unlike Diver Down, 1984 (titled as such in reference to the year it was released, and also, a nod to the famous novel Nineteen Eighty-Four, by George Orwell) was entirely covers-free. And while the presence of synths was undeniable, what ultimately made it not such a big deal amongst their rocker following was that they were not used on every bloody song (really only on three — the instrumental title track, “Jump”, and “I’ll Wait”), and the rest of the album rocked ferociously (“Panama”, “Top Jimmy”, “Drop Dead Legs”, “Hot for Teacher”, “Girl Gone Bad”, and “House of Pain”), resulting in their finest disc since their flawless debut.

Released on January 9, 1984, the album rocketed up the Billboard 200 to #2, while “Jump” would top the Billboard Hot 100. The reason for such mega-success right off the bat was two-fold — firstly, “Jump” featured an incredibly popular music video that MTV aired non-stop, and secondly, EVH’s much-publicized appearance on Michael Jackson’s “Beat It” a year prior caught the attention of pop fans, which resulted in a massive broadening of potential VH record buyers.

While quite a few rock guitarists began replicating EVH’s trademark two-handed tapping into their solos ever since the band’s debut hit, it seemed like every guitarist was doing so in the wake of the success of 1984. But as guitarist Paul Gilbert (Racer X / Mr. Big) explained in the book Shredders! The Oral History of Speed Guitar (And More), this was not entirely Eddie’s fault.

“Eddie Van Halen is 100% great, and he unintentionally really messed up a lot of guitar players — because everybody was so enamored with the flashy parts that it knocked a lot of people off balance. It’s funny to see the repercussions of it. The ‘Eddie Van Halen bomb’ went off and it destroyed a lot of people’s rhythm. [Laughs] Which is funny, because he has such good rhythm. But it’s not his fault — it’s the listener’s fault for just listening to ‘Eruption’ and nothing else.”

And former Megadeth guitarist Marty Friedman voiced similar sentiments in the same book. “I fell in love with Eddie Van Halen’s guitar tone, and believe it or not, I think the best thing about his playing is the stuff that he does when he’s not doing that finger tapping stuff. That never appealed to me, although it probably influenced more young guitarists than any other thing in the history of guitar. I would suggest listening to what he does between all that finger tapping and you’ll find some fantastic, juicy-ass phrasing. Man, that guy is a natural. Love it.”

After the release of 1984, VH embarked on a highly successful world tour, scored further radio and/or MTV hits after “Jump” (“I’ll Wait”, “Panama”, and “Hot for Teacher”), and in the process, became undoubtedly one of, if not the top hard rock act around (appointing them “the American Led Zeppelin” would not have been far-fetched). But just as world domination for years to come seemed like a slam dunk, one of the most ill-timed split-ups in rock history occurred. Instead of getting to work straight away on a follow-up to 1984, Roth opted to issue a 4-song EP of cover tunes (1985’s Crazy from the Heat), and planned on doing a movie. The other members of VH took exception to this, and in mid-1985, the rock world was shocked to hear that Roth had left the group.

But truth be told, there seems to be a giant “What if?” factor concerning Roth’s first go-round with Vand Halen — how much further could they have gone had they not split up at their peak? Roth and VH would eventually reunite in 2007, and issue a surprisingly hard rocking album in 2012, A Different Kind of Truth. But still, that “What if they hadn’t split up in 1985?” question will always linger.

Nevertheless, 1984 remains one of Van Halen’s crowning achievements, and the numbers don’t lie — at last count, the album was certified Diamond by the RIAA for 10 million copies moved in the United States alone.