"I wasn't hiding it, but I didn't want to get deported so I'm not going to come and be like, 'Hey, I wasn't born here.'" 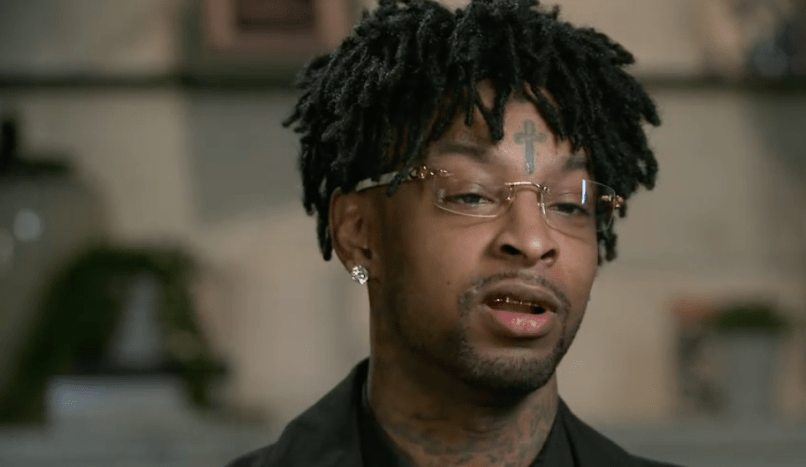 On Friday, 21 Savage sat down with Good Morning America for his first interview since being released from an ICE detention center.

The 26-year-old rapper (born Sha Yaa Bin Abraham-Joseph) was arrested earlier this month as part of a targeted operation carried out by ICE. A spokesperson for ICE subsequently alleged 21 Savage to be a “United Kingdom national” who “initially entered the US legally in July 2005, but subsequently failed to depart under the terms of his nonimmigrant visa.”

21 Savage’s attorneys argued that he lost his legal status in 2006 “through no fault of his own” and applied for a visa in 2017 once he learned he was in the country illegally. They also questioned the legality of his nine-day detainment, arguing that he was not subject to mandatory detention under federal law and was entitled to bond.

Speaking to Good Morning America, 21 Savage discussed the confusion surrounding his immigration status. “I ain’t know what a VISA was. I was seven when I first came here. I knew I wasn’t born here, but I didn’t know what that meant as far as when I transitioned into an adult, how it was going to affect my life,” he explained. “I wasn’t hiding it, but I didn’t want to get deported so I’m not going to come and be like, ‘Hey, I wasn’t born here.'”

21 Savage said his lawyers believe he was made an example by ICE because of his celebrity. His lawyers also note that his arrest came shortly after he criticized Trump’s extreme immigration policies with his song “A Lot”.

Alex Spiro, a lawyer for 21 Savage, acknowledged that the rapper is still under the threat of deportation, but  added: “We’re confident and his fans should be confident that’ll he be able to remain here.”

Watch the interview in full below.

In related news, following his release from ICE custody on Tuesday, it was revealed that US government attorneys had dropped an “aggravated felony” charge against 21 Savage, which they originally used as grounds to deport him, according to BuzzFeed News. ICE is now pursuing his deportation only on the grounds that he overstayed his visa.